I watched Twenty Feet From Stardom last night and it was good.
It was also rather sad as it demonstrated once again that women, especially women of color, no matter how much unbelievable talent they may have are not going to get their due in this lifetime.
So many of the women who were (and are) the vocal talent on zillions of hit records and who make a live concert come alive are relegated to being, yes, twenty feet away from stardom and will never get the recognition, fame, or riches that they deserve.
And that's just the flat-out truth.
You know who DID start out as a back-up singer who went on to have a fairly successful solo career?
Sheryl Crow.
And I have to say that I truly do not believe that it was because of Sheryl's fantastic vocal abilities that she got the deal and the attention. Know what I'm saying here?

This is not to say that a precious few of the amazing back-up singers who were the go-to ladies for recordings and concerts haven't done well. Some of them have.
A precious few.

Lisa Fischer is one of them. She never did get the solo career she wanted and deserved but she was asked to join the Rolling Stones and that ain't nothing. It's something. I mean look- Mick Jagger tried to have a solo career and it didn't work out for him but that band thing has been fairly successful.
And Lisa is still singing with them.

So. It was interesting and rather heart-breaking at times and Bruce Springsteen was part of it and so was Mick Jagger and so was Stevie Wonder. But mostly, it was the women telling their stories and my favorite parts were when they would get together in their older age and sing, spontaneously, and the hairs rose up on the back of my neck.
It is one of the greatest regrets of my life that I cannot, for the life of me, sing harmony. It's not in me. If I do get a next lifetime and if I'm not a lichen, I swear I hope I can sing harmonies. That's it. That's my entire wish. Because it seems to me that being able to close one's eyes and be a part of the weaving together of voices in song is about the highest achievement one could attain whether on a stage in front of thousands or on a back porch in front of no one. Just the magic that happens when two or more people can dance around and with each other with the music that comes forth from their lungs, their guts, their hearts, their souls.

I drove over to Jessie's house this morning and the boys were climbing all over the sofa cushions whose covers Jessie had in the wash due to peeing incidents.
August is being a bit stubborn about the potty training. He CAN do it and he does do it but sometimes he doesn't want to do it and there you go. He's not worried about it and he's certainly not ashamed about it. Why should he be? He's got a mommy who will take care of any and all problems that may arise due to unforeseen accidents.
And sofa cushions are just as much fun to play on without their covers as they are with their covers.
But we decided, after everything was dealt with for the moment, to go to a thrift store and that was okay although we didn't get much. There were guys working there, homeless men for the most part I think, who were absolutely charmed by the boys and August was gifted a Rudolph the Red Nosed Reindeer who only needed batteries to make his nose light up and music to play AND a Beanie Baby cardinal and Levon got a Beanie Baby blue jay. Jessie also bought an angel to go on top of a Christmas tree (two dollars) and a shirt for one of the boys. Maybe something else. I can't remember.
And then we met Jason and Lily who had a rare day off together and Ms. Magnolia June at Tan's Restaurant where they have delicious everything from curry to hot and sour soup to a freezer full of ice cream desserts. 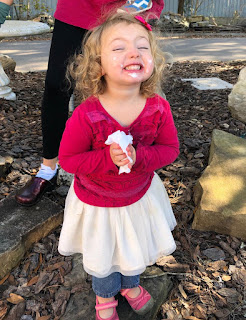 Maggie after her Klondike bar.

We tried very hard to get all three children to pose for a picture and this is the best we could do. 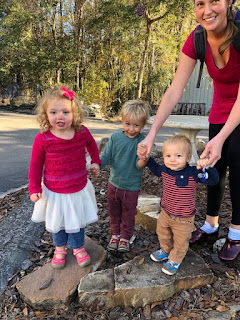 By the time I got home this afternoon it was so late that after I got the clothes off the line and the groceries put away and the bed made up with clean sheets it was almost time to put the chickens up. Eggy Tina is in a nest with Dearie and her babies tonight and when I went to shut them up she was pecking at the babies and Dearie was pecking at her.
They'll settle down.
And pecking order will be figured out.
I wonder what PETA would like me to say instead of "pecking order?"
No. No. I'm not going to go there.

And because it's Friday night and because I watched that documentary last night, I offer you this.

I love it on so many levels. One, because it shows Keith doing his flying/dancing/hand-slapping thing as he goes onstage. Another because it shows Charlie Watts being Charlie Watts, playing the drums as only he can do. Another because this is what rock-n-roll is and lastly, because Lisa Fischer gets her due here. Mick (who annoys me somewhat in the video but let's face it- there would be NO Rolling Stones without Mick Jagger) shares the stage with her and lets her be who and what she is which is a powerhouse who can out-sing him, out-dance him, and who gently puts her hand on his back which says so much about the connection which they so obviously have.
Gold rings on ya'.
Happy Friday, y'all.