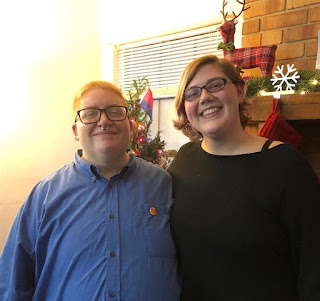 What a beautiful day it was today in all regards! There are the host and hostess for our little Christmas party. Aren't they beautiful? I love those two people so much. I hadn't been in their apartment before and it was darling! A little full with our family filling it up but quite adequate. Jessie couldn't make it because she's not right in the tummy but Vergil brought the boys so all of the grandchildren were there, each one of them in their unique and shining differences.

I was terrible at getting pictures today. I kept losing my phone for one thing and then other things kept popping up and so please forgive me for not getting pictures of everyone.
Maggie was lovely in a red fluffy dress with black tights and purple sparkle shoes. She is her mama all over again in some ways. She is also obviously the youngest child in a family with two older brothers. She may look like a cherub with those golden curls, those pretty pouty lips, those dresses with ballet skirts but as her mother said today, "Don't wake the beast!"
Gibson wasn't giving up a chair which Maggie was quite sure was her chair. I do believe that Gibson gave up the chair to Her Majesty, Princess Magnolia. Which was all for the best.
I KNOW a took a picture of her and August playing and I can't find it. She was wrapped up in a cat tunnel toy and August was laughing his head off, holding a bucket with a stuffed animal in it.
You'll just have to use your imagination.
Gibson used his outdoor voice which is the only one he has. He and Owen kept sneaking into the kitchen to steal shrimp.
And Levon was overwhelmed at first and spent a lot of time in his daddy's arms or mine, observing everything with a bit of a worried expression on his face but after awhile he relaxed and started walking around and enjoying himself. When it came time to eat, he was positively merry. 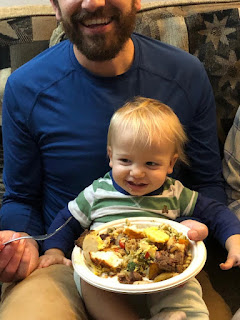 That boy is going to surprise us all one of these days. I do not know how but I know he's going to do it. He's sort of staying under the radar right now but that's not going to last for long.

The food was so good. Rachel cooked and cooked. She made shrimp and grits and delicious fingerling potatoes and gingerbread men with a bowl of icing to spread on them to your own personal desire. I think Maggie ate about half a dozen of those. And I could have too. There was hot, spiced cider and pasta salad and guacamole and chips and a black bean salsa that couldn't be beat. I made some biscuits and a sort of frittata, neither which would have won any prizes, but they were edible. Lily made a cinnamon roll and apple casserole. What else was there? I can't even remember.

Here's a picture I took to send to Jessie to show her that her boys were all fine. 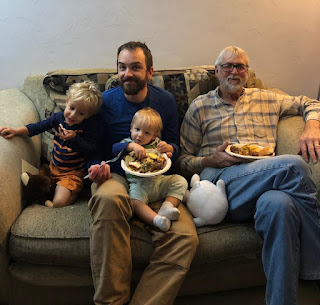 We all laughed a lot, as usual, and I got to catch up with May and Michael a little bit. There was a lot of joy, being in Rachel and Hank's little home with their two cats. I think it was Lily who said, "Hank, this is the most bougie place you've ever lived!" and Hank agreed that it was. But I think it agrees with him although mostly it's Rachel who agrees with him. She is such a light in our eyes and lives. I love her for making my son so happy and it's that very spirit she brings to his life that makes me love her even more. She is beautiful in all ways and she is good and she is true and she is smart and she is funny and she is thoughtful and kind.
We adore her.

So that was our gathering. I was sitting by August on the couch and everything around us was the regular joyful chaos and I said, "Well, this is a party, August. What do you think?"
"Pretty good," he said.

And now Mr. Moon and I are home and cozy and being in love. How can one woman deal with such sweetness?

OH! All of the chickens showed up this morning. They are all fine. I am certain that Dearie is doing the bird version of weaning her children which upsets the entire flock but it must be done. I brought home a few tidbits from the party to give the nursery flock and as they ate I said, "All right! Raise your hand if you're a rooster!"
Not a damn one admitted to being a male.
But that's a problem for another day.
This day has been too filled with goodness to sully with such foolishness.