The Babies Are Sleeping With One Of Their Fathers 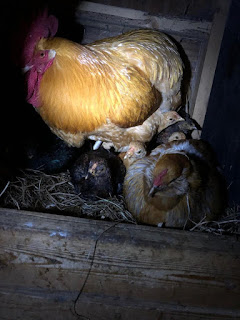 Just now when I went to shut the door on the hen house I did a check to see if all was well as I always do and no, all is NOT well in chicken world and I don't know what in hell is going on. All of the littles are there but their mother is not. Nor are four other chickens.
There was a kerfluffle when they were doing their going-to-roost rituals this evening but from where I was watching, I saw no one running for cover as they do if there's a predator and their voices were raised, for sure, but they didn't sound terrified, they way they can when something's after them. So what was going on? Has Ringo's coup extended to taking other hens to bed with him? Has Dearie decided that tonight's the night she's cutting the babies loose? Unless she's dead, that must be true. And it's time, I suppose. They're getting so big and squabbling amongst themselves and she's probably ready for a break.
I sure hope they all show up tomorrow though.
Anyway, the kids are sleeping with Liberace, Viv/Vera, and Eggy Tina. Well, most of them. Two are in a separate roost.

It's been a wacky day anyway. I haven't left the property. And I haven't really gotten anything of worth done, either. Just a ridiculous day where I sort of wandered around doing a little of this and a little of that and even took a nap although I got about ten hours of sleep last night. Mr. Moon, meanwhile, has done everything from getting a  trailer out of a spot that's blocked in by the tree that fell during the hurricane and still hasn't been removed, to getting the pews out of a rental property that we own which was abandoned by a church and in the same afternoon, giving them away and transporting them to their new home.
The man never stops.

I did make up a batch of angel biscuit dough to take over to Rachel and Hank's tomorrow to bake. They're having us all over for a lunch/brunch and we're all bringing something. I hope Rachel doesn't kill herself cooking. There's a lot of us. Fifteen including her and Hank. Is that possible?
Yep.
I'm looking forward to it. It'll be our last big gathering before we leave for Mexico and I do believe that Jessie and Vergil and the boys are heading to Asheville for Christmas which is good because those boys need to see their other grandparents and cousins and aunt and uncle and all of those people need to see them. Plus there might be snow and those half-mountain boys need to have some experience with that particular not-found-in-Florida substance.

I've got three more suppers to cook after tonight before we leave. Today I made a big crockpot full of a venison chili thing that's more like soup at this moment. I guess I'll make some rice to go in it. I wish I had some hominy and cabbage to throw in there but I don't so I'll just make some cornbread. Can you imagine not having to decide what to cook for supper for two whole weeks?
Of course we'll have to decide where to dine every night but I suppose I can manage that. There are definitely some restaurants that I can't wait to go back to and some new ones that I'm looking forward to trying. The restaurant we always go to for our first supper is no longer there which is a huge sadness. I loved that place. It's right on the square and I always got chilis rellenos but the owner died and I hear that the daughter tried to keep it going for awhile but wasn't able to. They had the best tiny but lethal margaritas there and it was just a part of our rituals, our enjoyment.
All things must pass.
Another restaurant we always used to visit was a place called Santiago's and Senior Santiago used to sit with us as we drank coffee and Kahlua and tell us stories about the Alux, the elf-like creatures who inhabit the Yucatan. I loved Sr. Santiago so much. Once he actually went to a grocery store while we were eating and bought me some Recado, a spice that is commonly used in cooking in the Yucatan so that I could take it home with me. He closed his restaurant many years ago and I often wonder about him. He was such a beautiful gentleman.

Mr. Moon just asked me if we usually take a hanging bag with us and I said that no, we do not. He said that he could just fold his shirts and pack them in his bag and if they need ironing we can do it there.
"We?"
I gave him a look and after thirty-four years of marriage he knew what it meant.
"That's a little too much like housework," I told him.
He can just deal with the wrinkles.

Anyway, I suppose I better get in the kitchen and do some housewifely chores like unloading the dishwasher and folding clothes and making cornbread. Mary Moon has a very different life than Maria Luna does. Instead of laundry and cooking, etc., I will be watching the sun set, applying eyeshadow and deciding which earrings to wear.
It will not suck.
Not in the least.

I'll report in tomorrow about how many chickens show up for their morning corn.