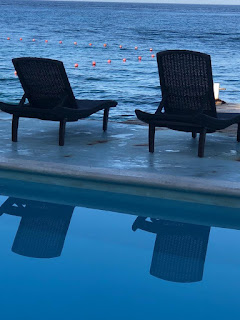 Woke up to the blues.
The good kind of blues. The sky blues, the water blues. The Blue Planet Blues.

We decided to take another trip to the other side of the island and so we did. We got on the the scooter and drove slow and easy down to the tip of the island and across, by beach and by jungle. We gawked at the huge mansions that people have built on the water, so big that entire staffs of cleaning people and gardeners and cooks and security must be involved. We passed beach clubs and all-inclusive resorts. We stopped on a tiny side road to get off the bike and stretch our poor old tired bones and muscles. As we drove I kept up a running commentary on Cuba and some of the reasons for the differences there and Cozumel which are two islands in the Caribbean so close together. In my opinion, of course. My poor husband. I have no idea why I felt compelled to share these things as we scooted through the jungle by the sea unless it was to distract us from the pain in our butts and our backs.

The ocean on the east side of the island was as amazing as I've ever seen it and none of the pictures I took give the slightest hint of the colors we saw. 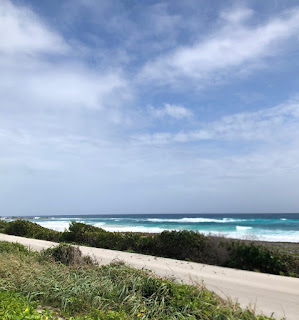 Maybe that gives you a little taste. By now I had finished my Cuba theories and we both just kept saying, "I can't fucking believe this."
And we couldn't.
It's like colors not found in nature except they're found in nature. Liquid turquoise, liquid sapphire, liquid emerald. Angel wing froth.
Unbelievable.

We stopped at Chen Rio again because we had to have more snapper and ceviche. We pulled into the parking area right next to a couple pulling in driving a shit-beat old VW Beetle who were from Canada. They had broken down on the way across the island but one of the Green Angel trucks who patrol the island roads to help motorists in trouble had gotten them going again.
Free.
They were in a state of happy disbelief.
"Where can you get good seafood?" they asked.
We said, "You're there."

We ordered our usual and before we'd finished the rain came in. It was a scene! Everyone scrambled from the tables under small palapas to the more protected places. Waiters rushed to try and make sense of what was left on tables and how they kept everything straight, I do not know. The rain was so light. It got cool and the air was delicious and I sat in complete happiness watching it all, the sky, the sea, the people, the rain and before we knew it, the sky cleared completely and was cloudless and blue again and everyone made their way back to the beach and began ordering more food, more drinks, and the little children played in the water in the protected lagoon.

We paid our bill and got back on the bike and came back to town on the shorter circuit. Again we drove very slowly, taking in the sights. Cozumel is a place where Iron Man competitions are frequently held and there is a bike-lane for the cycling part where we were driving and Mr. Moon was actually in it, which we weren't supposed to be.
"You know you're in the bike lane," I told him.
"Let me know if someone on a bike comes up behind us. I'll move over and let him pass," he said.
I laughed and laughed.
We stopped at Chedraui for our daily gallon of water and some more coffee and beer. We stood in line to check out and the couple in front of us (gringos) had a problem with the price of a pillow and then decided that they didn't want the ice cream they were going to buy because it was melting and let me tell you something- in Mexico, it takes practically a court order to get something off your bill. That's just the way it is. But people standing in line got irate. The woman behind us actually yelled at the cashier or perhaps at the couple. I don't know because she was speaking Spanish. Then she began complaining to me, believing in error that I could understand her but of course I couldn't although I had a good idea what she was saying which was "fuck this shit!"
Finally the couple just said, "Take it all back," and walked out of the store.
It was pretty crazy. 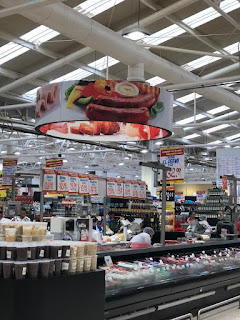 We drove on back to the hotel, tired as can be from too much sun, so much driving, good food and one whole beer apiece. Bagheera was waiting for us to see what we would bring her. I gave her some bacon I'd saved from breakfast and she ate it. And then she let me scratch her head which is all she'll deign to do and again, I felt blessed. 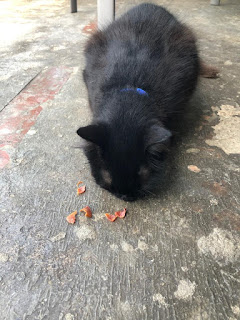 We are all this way about Bagheera which is why she has such a good life.

We decided to get in the pool and we did. It cooled us down and we swam leisurely back and forth from one end to the other, stretching our muscles and recovering from our long ride. It was heavenly.

And then sunset, of course. 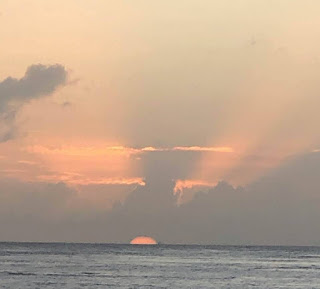 Supper tonight was at a VERY popular restaurant on the waterfront. Guidos. Italian. It was so packed that we had to wait for at least forty-five minutes for a table sitting on the seawall across the street from the joint.

It was worth it. We got delicious salads and split a pizza and had martinis. 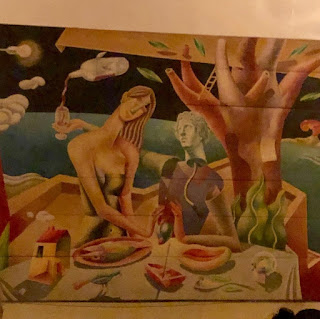 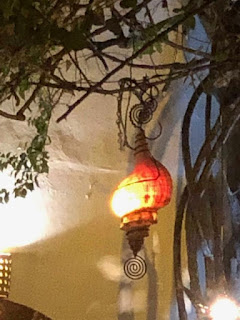 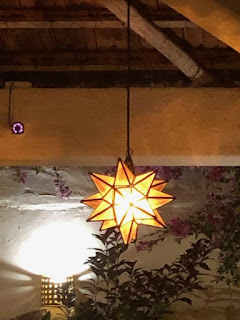 We ate in a beautiful courtyard and it was romantic and lovely.

Our taxi driver asked us on the way back to the hotel if we had been hippies.
"I still am!" I told him. He seems to be fascinated with hippie times. The music, the cars, the food.
The food? Is he especially fond of lentils and brown rice, I wondered?
I think perhaps he had a slightly romanticized idea of what hippies were but that's okay.
I asked him if he had children. I always ask the taxi drivers this.
"Of course!" he said.

In Chedraui a man was holding a darling new baby dressed all in pink, an angel-cloud version of a baby girl. I admired her and asked how old she was.
"Twenty-five days," he said proudly.
I loved that. Not a month old but twenty-five days exactly.
"I love babies," I told him.
"So do I!" he said. "That's why this is my second!"
"She is beautiful," I told him.
"Thank you," he said. The love he felt for that baby child was so palpable.

Our server in the restaurant here has taken a second job. "For my children," he told me.
This means he will work until late at night and then be here in the morning, early, so that the divers can get their breakfasts before they go out.

Being here makes me so much more furious with that pretender in the White House. He is trying to stop the most loving, industrious, creative people I have ever met from entering our country. He vilifies them. The man who has never done one honest day of work in his entire life has the effrontery to label entire countries of people as thieves and rapists and drug dealers.
He would absolutely DIE if he tried to do the work of one mesero de playa for one day. Not only could he not physically do it, there is no way he is up to the mental challenge of being a server. I absolutely believe that our president has neither the stamina or mental capacity of a typical Mexican waiter, not to mention the emotional stability.

Okay. I'll stop now. I'm insulting servers everywhere with this comparison and I know it. 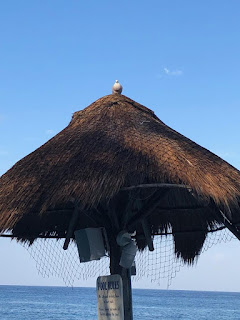 I do not feel like the same woman I was when I arrived here. And I mean that in all of the most wonderful ways possible.