And The Rain Still Falls 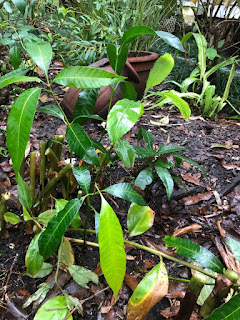 I am a lazy AF composter.
i.e. I don't compost.
But I keep all of my food scraps and dump them outside for the chickens to examine and plunder and eventually, everything either gets eaten or breaks down into the soil. As the chickens scratch through the scraps, they keep the weeds back and also poop which fertilizes whatever is growing there. My main dumping place is under the banana plants in the little garden area off the kitchen but sometimes I put the peels and leftovers in another planted place beneath palms and lately I've been emptying my old enamel-ware pot that I keep the scraps in underneath an azalea by the back porch which has never really recovered from the dogs peeing on it and which is choked with border grass.
See? Lazy AF. But. Thank-you, chickens!

Anyway, this morning it rained so hard I thought the aquifer was going to bust through its limestone and come right up to the surface of the dirt but a little after noon it slacked off and I went outside to do a little clearing. I started out with that bed beside the kitchen, cutting back and pulling some frost-browned lilies and some four o'clocks and trimmed up a rose bush, mostly just enough to get under to work. And what did I discover beneath all of that stuff when I'd gotten it cleared? A tiny mango orchard from where I'd thrown all of the seeds of the mangoes I'd brought home from Roseland. They look far healthier, actually, than the ones I started in pots.
Which is how it goes, of course.
And that's what you're seeing in that picture at the top.

My garden this year is not doing a damn thing. NOTHING! The poor little plants are pathetic bonsai weakling seedlings. Why? Has it rained too much? I don't know but I'm sorely disappointed and sad. I feel like a failure.

It's been so humid and so warm here today that working outside was not really a pleasure. December 2nd and I'm sitting here at six o'clock in the evening wearing a sleeveless dress. I just checked my weather widget. It's 72 degrees, the humidity is 96% and the chance of rain is 70%. It's dripping a bit but supposedly it's going to be raining on and off all day tonight and part of tomorrow.
I was joking yesterday about the frogs but I've actually heard a few making their hungry-for-love whistles.
Yes. Frogs can whistle. Or at least that's what it sounds like.

And I don't even need to say a thing about climate change. Because obviously, the climate has changed, is changing, will change even more.
Oh, what a fucking mess we've created.

But hey! I still have roses blooming. 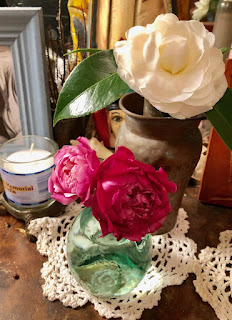 Roses and camellias. I couldn't bear to trim back that plant because there were buds all over it.
Those roses may not look fancy, and they aren't. But they smell like roses should smell.
And the tea olive has broken forth in its delicate little flowers which can scent an entire yard.
After all of these years I've never really figured out when the tea olive blooms. It seems irregularly random to me.
Ah. I've just looked it up.

"The plants typically flower at several times throughout the year, with some bloom cycles heavier than others. Flowers of the species type are creamy white, while improved cultivars offer yellow or orange flowers (Osmanthus fragrans 'Butter Yellow', O. fragrans 'Apricot Gold', and O. fragrans f. aurantiacus)."

From University of Florida Gardening Solutions

I sort of love that. ...typically flower at several times throughout the year, with some bloom cycles heavier than others.
So I'm not crazy and it's blooming is irregularly random. Sort of like a woman.

Of course I will forget this and next time it blooms I'll be saying, After all of these years I've never really figured out when the tea olive blooms.

And then perhaps I will google it again.
And be delighted again.

Speaking of which, they are experimenting with using ultra-sound technology to treat Alzheimer's. Have you seen this?

The rain is coming down nicely again. Despite the fact that we've had plenty lately, I still love to hear it fall. It is, as I have so often said, the reverse of god's promise to Noah. It is the promise, not of never flooding the entire earth again by a deity who realized he'd made a huge mistake and needed to wipe it out and start again, but of a planet which is still capable of providing all living things with the water which we need to sustain life. At least this tiny part of it.

Just trying to look on the bright side.
Or, as it is right now, the cloudy side.

From my crazy world to yours.