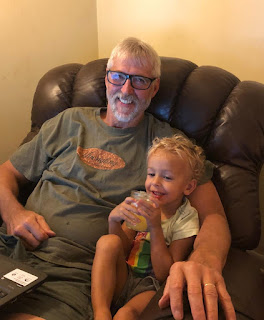 Well, look who's spending the night tonight. August Glinden who, as soon as his Boppy walked in the door said, "You want to watch TV?"
Oh gosh.
Before that though, we'd done a lot of things with his mother and brother including tractor riding, of course. I swear, Levon gets more excited about driving that tractor than anyone. He can already make motor noises and he steers and steers and finds levers like a pro.
A rather scary and very exciting thing happened. We were in the kitchen and heard some chicken-in-distress noises and I saw something on the kitchen porch and thought maybe it was a cat or a dog trying to get one of my hens. Jessie bolted out of the door with Levon on her hip and I followed and dang if we didn't see a hawk fly from the front porch, empty-clawed, thank god. But the chickens were most upset and huddled under the kitchen porch and Liberace made the warning crow over and over and over again and they all bawked and fussed and Jessie and I could not find an injured chicken anywhere and eventually, they all settled down and I think everyone's okay. I'll do a head count when they go to bed. I've had chickens so traumatized by attempted hawk abduction that they spent the entire night outside somewhere, hidden under a porch or a deck, most likely, terrified to cross the yard.
In the middle of the damn day! That must have been a hungry hawk. I don't blame the hawk- a predator has to do what a predator has to do but I hate having my chickens scared and possibly hurt. And possibly carried off although I'm not sure I've ever seen a hawk successfully carry  a full-grown chicken farther than a few feet.

Anyway, there you go. Excitement in Lloyd and of course the guy sending all of the bombs to Democrats is another insane Florida Man, this one driven to insanity (if he wasn't already there) by right-wing spewings and lies and his own idol, the Dumpster himself.
I don't know what to say.
I just don't.
Except thank all of the powers that be that no one was injured or killed.

I've felt off and wonky all day long and I still do. The shopping cart I was using at Publix was wonky, too, going off in one direction and then another and it took me quite awhile to reassure myself that it WAS the cart and not me as I wandered about buying sweet potatoes and acorn squash and light bulbs and lemons, bananas, juice, and yogurt.

I overheard a white-haired woman who was shopping with her white-haired mother say, "Mama, I did not say that. Please don't do that. I am not Buster."
I pondered and pondered that as I shopped. I am endlessly curious about relationships between older women and their daughters. Sometimes they look so absolutely joyful and sometimes, they just don't. I know what my relationship was with my mother and it was not good, to say the least. Next up on the big wheel will be my relationship with my daughters and so far, so good. Unless I go completely demented which I fear daily will happen, and start calling them horrible names or saying things that make them hate me, I think we'll be okay. I hope so.

But here I am now, safe at home and August is sitting with his grandfather and they are watching Baby Boss for the one millionth time which is tradition now. I have a chicken in the oven (hypocrite!) with a little stuffing in it and I will make some mac cheese which August and his grandfather both love and broccoli to make it all healthy and then it will be bath time and then story time and then bed time and we'll make up August's bed beside our bed and hopefully he will sleep well. It's supposed to get cooler tonight, which I am glad for. It's been a little bit warm today. Our temperatures are being forecast to go up and down with as much as thirty degree differences in one day and how's this? The pecans are putting on new spring leaves.
In October.

Hard not to feel like the world is beyond fucked on so many levels right now but it is possible to concentrate on whatever sane goodness we have in our lives.

That's what I'm trying to do.
May you be able to do so as well.