If I Could Choose 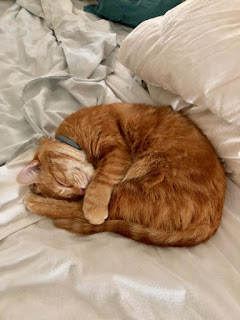 Here's a picture of Maurice who spent half the day just like that, curled up on my bed. I finally had to move her in order to make it. Cats, like humans, get acclimated and I'm sure that to her it feels cold. A friend of mine moved from Tallahassee to South Dakota recently and her poor kitty has had a difficult time adjusting to the (truly) cooler temperatures there. She is not most pleased, I hear. 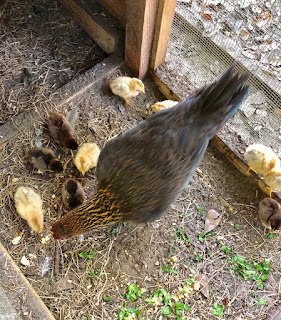 Here's what darling Dearie and her babies looked like this morning when I took them their chopped grapes and spinach after my walk. They seem fine and survived last night's lower temperatures under their mama's wings without a problem.

I took a very pleasant walk this morning in the coolness. I woke up with a lot of anxiety and all of that blah, blah and hoped that the walk would magically fix it all but it did not. However, as always I was glad I got out there and did it. I have no idea why but the anxiety has been ramping lately and I need to do whatever I can to be able to live with it more comfortably. I would say to do whatever I can to fend it off but that doesn't seem to be how it works.
Hell. I don't know.

I don't know anything (have you figured that out yet?) and am pretty sure that I've given up trying. And so I go on doing what I have been given to do and trying with all of my heart not to take things so seriously. If there were one thing I wish I could change about myself, I do believe it would be that I could have a more cheerful and trusting heart. I think that if I had that, so many things would flow more easily and I would be able to put it all in perspective with more wisdom and certainty. And quite frankly, it seems to me that the people I know who are more like Pollyanna in their outlooks actually get more accomplished than we who fear that all comes to naught.
How much easier is it to make a leap of faith when you believe that the very earth itself is waiting to catch you than it is if you believe that the result of such a leap will lead directly into the great abyss? And without those leaps of faith, nothing much can be achieved.
I know that with all of my pessimistic heart and yet can no more seem to change myself than I can change the color of the sky.

Ah well. Like Popeye, I yam who I yam and that's all that I am.
I had some spinach for lunch. It was good and now my biceps are like the ones Brutus has.
Trust me.

And for those of you who do not know who Pollyanna, Popeye, and Brutus are, I can only say, "Well, that's all right. I am old. You are not."