How We Hold On 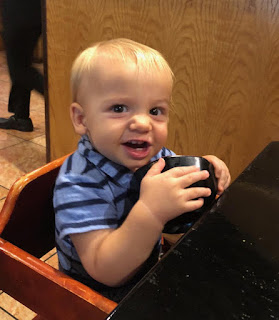 That was Levon at Japanica eating food from a bowl by tipping it up and covering his face with it. I tried to get a picture of that but failed. He looks a bit devilish there, doesn't he?
I wasn't going to leave my house and yard today. I woke up back in the depths again but Jessie texted and wanted to go to Costco and even though I really did not need a damn thing there, not really, I agreed to go anyway because I knew that it would be good for me to see the boys and their mama and besides, it helps her get her shopping done to have me with her.
Plus- lunch.
So we met at the giant friendly place and I saw one of the employees whom I really do have a great affection for and I haven't seen her in forever so that was nice. And we looked at toys and August was happy about that and when it was time to go into the coldy room where they keep the produce, he said, "Will you cuddle me to keep me warm?" and I said that I certainly would and I picked him up and wrapped my arms around him and he giggled and we were fake-stunned at the cold and we fake-shivered and I held him tight as could be because that's about the only time that kid will let me hug him.
So that was good and I even found Mr. Moon a little present for our anniversary which is on Thursday and if he doesn't like it he can take it back, no problem, and that's why I love Costco. Well, that and the fact that I always see the same employees and they are cheerful and efficient and polite. And of course, there are the samples.
While we were there, we got a group text from May who had just seen JOE BIDEN!!!! 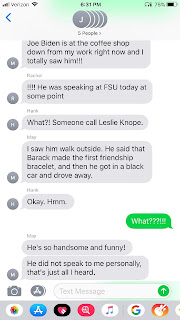 How cool is that?
Sweet, handsome, funny, strong, man-bonded-to-Barack-Obama-Joe-Biden!

Tallahassee will surprise you sometimes. And I suppose, so will Joe Biden.

So that was exciting and then Jessie and I went to Japanica and had miso soup and salad with ginger dressing and I had the green curry tofu Bento and Jessie had hibachi chicken with vegetables and Levon ate everything and August ate his soup and some of his salad and my spring roll and some of his mama's chicken and vegetables and some of my rice and a piece of my broccoli and when we left we all had sticky rice all over us and I even found some in my purse.
It's always a good time at Japanica!
When I went to tell August good-bye he had just applied cherry-flavored lipstick and so he allowed me a kiss so it was pretty much a huge affection win for the day with that boy. Levon has begun kissing by opening his mouth as wide as a carp's and that was fun too because if you do it right, you can make one of those popping kisses.
Did I tell you that he's starting to take a few steps at a time now?

We didn't do the bookstore today because August has a cold and when he's a little sick he tends to become the teensiest bit manic and Jessie was not up for that. I frankly wasn't either, although I would have soldiered on if she'd wanted to.
In fact, I may be getting the cold myself. I came home and thought about all of the things I could/should do and decided to take a nap.
Which I did.

And here in the Great State of Florida a white Neo-Nazi group from the Great State of Idaho is sending out robo-calls about MY candidate for governor, Andrew Gillium, which the Huffington Post describes as "disgustingly racist."
My heart breaks at least once every day for our country.

That's all I got, people.

A good friend of mine has a tag-line at the end of his e-mails which is this:

"What wisdom can you find that is greater than kindness?"
Jean Jacque Rousseau

That will be my tiny flame of hope for the day which I will use to try and bind my broken heart once again.