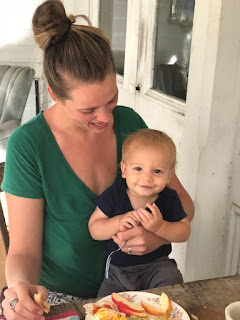 Kids! Even the ones who are well-behaved and lovely and funny and smart and amazing (i.e. all of my grandchildren) are so constant!

Here are some of the things that happened here today:

Cooking, cleaning up the kitchen, doing laundry, changing diapers, taking a small boy to the bathroom, feeding children, cleaning up after feeding children, reminding/helping a small boy to wash his hands, sweeping, reading books, puzzle-doing, pretending, asking a small boy to do something and being told, "Uh, no," with a wrist-twisting gesture to make the point more clear. There was also taking a small boy to the dump and the post office with him siting only on a booster seat because it was literally a drive of a block and a half and being told by the small boy that if he poops on the potty, I should take him on a long, long drive. Going to the doctor's office for the small boy to have his three-year-old check-up and having the small boy's brother, who has shown no signs of distress, vomit about a lake of puke on his mother, himself, and the floor before she'd even checked the small boy in.
Changing of clothing. Washing up as best as can be done in a public bathroom.
Having the small boy checked and examined. He is fine except that he is actually running a slight temperature which means he probably has what his brother had in the past week or so which is a viral cold, as the nurse practitioner called it.
But no shots. Because of the fever.
On the way to the doctor, Jessie was discussing the possibility of shots and August said, after some thought, "Could we go to another hos-pi-dal where they do not have shots?"

And so on.
Now the Boppy is home and so finally, FINALLY August can watch TV. Everything else pales in comparison with that. I have white bean chili in the crockpot and I am going to make some purple cabbage with apples and raisins and caraway seeds. And maybe some cornbread. We are going to try and get August to sleep tonight before ten-thirty which is when he went to sleep last night. This means that I better go finish up making supper now.

Meanwhile, all is well and Levon seems fine and August does too. He fell asleep on the way home from the doctor's while listening to Abbey Road but when Jessie brought him into the house and tried to lay him down he woke up. I was rocking and singing to Levon in the Glen Den and heard the sound of a small boy running down the hallway. August popped into the room and said, "Hey. What are you doing?"
"I thought you were going to take a nap," I said.
"I was just taking a little rest," he said.

We could all use one of those.