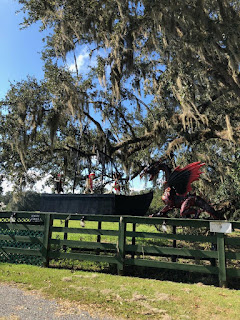 I took my first walk in two weeks this morning and I didn't go too far or too fast but I did go. One of the houses I pass is more farm/estate than simple house and they had gone crazy with the Halloween decorations. I don't know if you can see what's going on in that picture there's a boat and three pirate skeletons and a dragon. 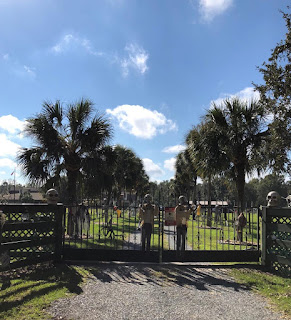 You can't really tell, but they've got skeleton activity going all the way up to the house and that driveway is at least an eighth of a mile long. 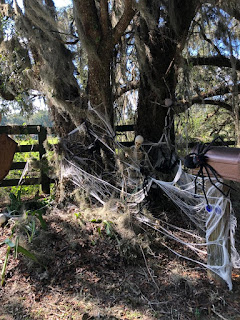 Here's a little tableau with some more skeletons and giant spiders, etc.
They have more things set up too, and maybe I'll take some pictures of those tomorrow.
I guess these folks must love to decorate for Halloween because they have at least a few thousand dollars in decorations set up that I can see and I guess that there's not much crime in that particular part of Jefferson County because anyone could go and steal a few skeletons.
I was impressed.

It's hot again. Up in the nineties today. I have the AC on and I'm feeling terrible for Lily and Jason and the kids because they don't have power YET! I invited them to come and stay with us but Lily said that she had everything set up for tonight but maybe tomorrow...
I dreamed last night that they'd gotten their power back on and it was so real and I was so happy for them that I checked my messages this morning to make sure that I had actually dreamed it and unfortunately, that was the case.
I also dreamed that there were a bunch of little black and white chicks in Darla's nest but that hasn't happened either. I did find this today. 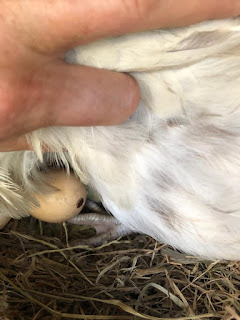 When a chick in the egg runs out of oxygen, they use what is called an egg tooth to punch a hole at the flat part of the end of the egg and that's what happened here. I picked up the egg and held it to my ear and heard nothing. I tapped it, and again, nothing. And I've been checking for any progress all day long and...nothing. And I have to tell you that the nest is starting to smell not good.
Not good at all.
This makes me so sad. I have no idea why these eggs wouldn't hatch. At least one of them was definitely fertilized. But if nothing has changed tomorrow, those eggs are going away and Darla's just going to have to try again sometime. I still have hopes for Dearie who shows up every few days to eat and drink and run around for a few minutes.

I went to town today, or at least as far as Costco and Publix which are on the east side of Tallahassee, which means they are closer to me in Lloyd and which means I don't have to actually go all the way into town and get into traffic and stuff. It was a strange feeling, being back in a public place, surrounded by people. I guess it's been a week since I'd made that journey. I had some out-of-body anxiety feelings but I made it through. The only thing anyone talks about is how we made out through the storm. "Do you have power?" "Yes, I have power but a tree hit my truck."
Etc.
Every conversation ends with, "But we're lucky," and we are but it's almost a primitive propitiation ritual to the gods.
You know that there's another month and a half of hurricane season, right?

When I got home I unloaded the groceries and put them away and then sighed deeply and put my overalls on and went out to pick up a few more branches and limbs. Our front sidewalk is still covered and that giant branch that fell on the power line and bounced off it is still leaning on the fence. I can't do anything about that but I felt I had to show at least a little good effort to appease the neighbors although I doubt they're judging me but who knows? And really, I don't care. I didn't have but about forty-five minutes of work in this 90 degree heat in me so I came in and took another shower. That makes two for the day.

Young Mr. Clinton stopped by for a little chat and it was nice to see him. He's such a cheerful soul. "Where's the big guy?" he asked me.
"Still at work," I said.

I've got pinto beans cooking. We've been eating way too high on the hog recently and I need to slide a little farther down the food pyramid, as it were. Plus, I love pinto beans.

And I guess that's all I have to talk about. I'm tired and looking forward to laying my body down tonight. This is no different than every other night but I think I'm going to be more grateful than usual when that happens. If that's even possible. I think it is.