Pure And Clear, Muddled And Confused 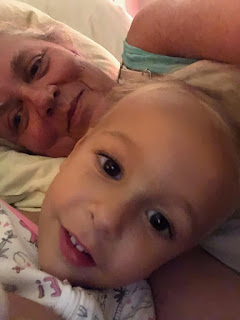 All of the chickens did come home to roost last night with no apparent injuries so that was good news. We had an excellent dinner with our grandson who tore up a chicken leg and stabbed his macaroni and cheese and then asked for a spoon with which to eat it more efficiently.
"A big spoon," he said.
"Who do you want to give you your bath?" I asked him. "Mer or Bop?"
"Bop!" he said with great certainty.
And so Bop gave him his bath and put him in his pajamas and we brushed teeth and we got on my bed, he and I, and read our favorite books including The Little Red Hen Makes a Pizza which I have read out loud so many, many times and still am not tired of it. August now lends his voice to the parts where the duck, the cat, and the dog all answer, "Not I," to the Little Red Hen when she asks for help in buying a pizza pan or mozzarella cheese or chopping and grating or making the dough. Owen and Gibson do this too and they have their own dramatic touches for each animal and I love how this is part of our ritual, every time one of them spends the night.
After our stories we went and told Boppy good-night and there was a hug and then I tucked him into his bed with many friends including Big Bear and Zippy and Little Monkey and Alligator and then finally, one more, a lamb which I think had belonged to his Aunt Lily and which, if you wind it up, plays "You Are My Sunshine" which is one of August's favorite songs. I kissed him and told him I loved him and before I was out of the room he was heavy-lidded and still, holding the lamb and that's how he fell asleep and that was how he was still sleeping when his grandfather and I went to bed. 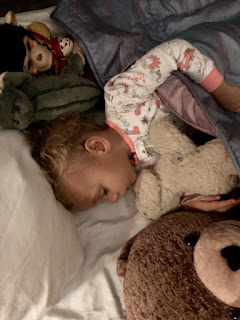 Precious little boy.
We hadn't told him but Boppy had a short trip planned out to Dog Island with our partner to see what condition our house was in and he was gone before August even woke up which he didn't do until almost nine. He popped up and said, "It's daytime!" and it was and then he said, "Where Boppy?" and I explained and told him that it was okay because he and I would play and that I would make him breakfast. He was okay with that.

He was shivery in the early morning cool and so I made him some hot chocolate while I was cooking his bacon and waffles. 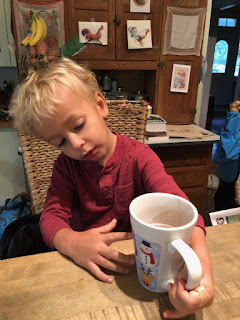 "Boy!" I said, "What are you going to do when you go to North Carolina to visit and it's snowing?"
"Play outside with my cousins," he told me. And then he listed them along with his aunt and uncle and his grandparents there.
And he will. And he will love it.

He ate two huge waffles with butter and syrup so fast that I couldn't believe it and then he was done and we went out and opened the hen house and fed the chickens their corn and we gave the baby chickens fresh water and food and he asked to hold one of the chicks and I caught one and he did hold it and he was so proud to cup his hands around it, the tiny thing with its scratchy little feet and little beak, it's soft, soft down and coming-in feathers.
Here's a picture I took of them this evening when I cleaned their coop and gave them some chopped spinach and apples and rice and ground venison. 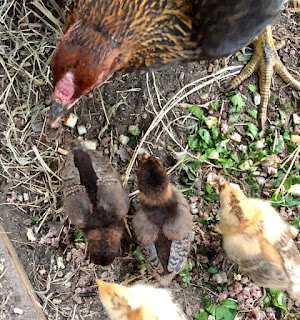 It's not a good shot but you can see the new wings on one of the brown chicks. They are starting to get identifying marks but they, too, will change before they're grown. Dearie is still being an excellent mother in all ways. If we ever do any chicken-housing improvements I want Mr. Moon to make a different baby nursery with smaller wire but roomier for the chicks that are being mother-raised.

August and I decided to walk to the post office and so we did. He held my hand and when we got to the neighbor's beauty berry bush I asked him if he remembered the name.
"Beauty berry!" he shouted. 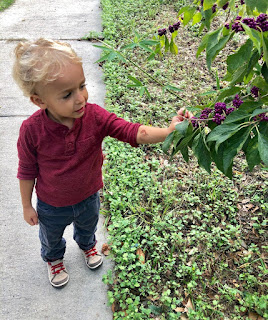 He knows how to push the little brass lever on the post office box to open it after I spin the dials to the right combination of letters. We pulled out our mail and then we said hello to the post mistress and I told August some of the things she does like putting the mail in the boxes and selling stamps. "She is very important!" I told him.
She smiled and said, "You have a good day," and we walked back home.

We read some books and in one of them there was a little Seminole Indian doll and I showed him the two old ones that I have and that led to us looking up Seminoles and Seminole Indian dolls on the internet and then on to chickees, the thatch huts that Seminoles lived in before they got fabulously wealthy by running Florida gambling operations.
"Look up how you make Seminole Indian dolls," he said, and we did that too. He always wants to know how things are made and how things work and "why?" is what he utters the most.

And then his mama and his brother came and we ate some lunch and then they left to go home. Mr. Moon is home now and he tilled the garden for me and now I have NO EXCUSE WHATSOEVER not to get out there and plant. 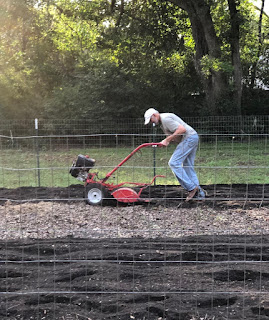 The dirt is fine and soft and ready and that is my plan for tomorrow.

Oh! And Dog Island! Well, the laundry/tool room underneath the house was flooded and the pump house and pump are gone. Well, broken. Something. And the orange shag carpet? Water did come in from under the doors and so some of it is ruined.
So sad.
So very, very sad.

And meanwhile, while all of this sweetness and love and goodness was going on, another horrible, unfathomable hate crime was being committed in a place of worship in a neighborhood described as "totally without crime" and all that the man who has engendered so much of this visible, murderous hate could offer was the idea that if there had been an armed guard in the Synagogue, things might not have been so bad.

What can we do?
Vote, of course. If that even matters now with what's happening at the polls.
And love. Just love. Love. I can't say it enough. We have to love. In all of the ways we are capable, I guess. I ain't enlightened and I cannot say that I can love Donald Trump. But I can wonder if he or the guy who sent the bombs or the men who shot up the Synagogue had anything like love in their childhoods. If they had parents who made them feel loved, if they had grandparents who made them feel loved.
Somehow I don't think so.
Trump's father may have made him a millionaire by the age of eight but I seriously doubt he ever cuddled his son or made him feel as if he was important. He was too busy making money and being a racist asshole himself.

Hell. I don't even know what I'm saying.
But fuck it- just love.
Whatever it is, whoever it is that you can love, do it with all of your heart.

That's all I got.