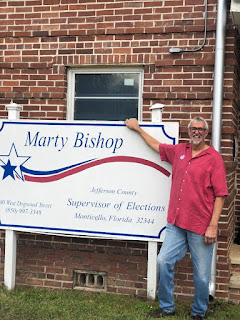 Mr. Moon stayed home from work today and we got ourselves together (I even put on make-up!) and drove to Monticello where we each had a piece of quiche at Tupelo's Bakery. Quiche which was so light and so airy that the chickens of angels probably laid the eggs it's made of and whoever makes the pastry has the lightest, surest hand on this earth and a magical rolling pin besides.
Really, it is good quiche.

Then we strolled down the block to early-vote at the old jail, the place I always think of as THE PLACE I VOTED FOR BARACK OBAMA TWICE and I love voting there. Everyone is so kind and courteous and there are always people coming in and going out. The people of Jefferson County do not take their right to vote lightly.

We drove to Thomasville, Georgia after that. Thomasville is as southern as southern can be and it has a downtown which thrives. There are all sorts of shops and restaurants and we visited a few of them. 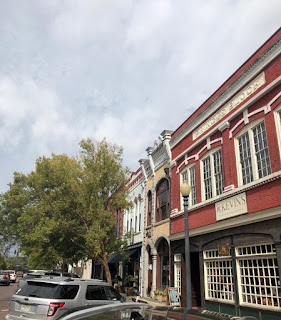 That's what one part of the downtown looks like. The store in that picture, Kevin's, is what Mr. Moon calls the place where the plantation owners buy their stuff.
And it's true.
Lord- if you need some fine china with hunting scenes on it, Kevin's has your back. They have fancy knives and fancy hunting clothes (for men and women) and beautiful leather bags and  beautiful cutlery and yes, jewelry (suitable for the deer stand?) and believe it or not, we bought not one durn thing. Our plantation is pretty-well stocked.
Mr. Moon did stop in at the barber shop to get his hair cut. 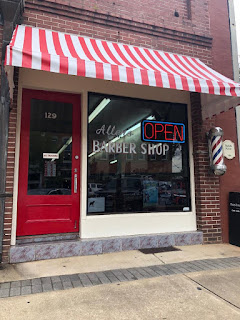 It's a real barber shop and has been in that location forever. While he was getting tended to I went back to another shop we'd visited, one of my own personal favorites and bought Maggie's Christmas present. I just could not leave Thomasville without some of this. 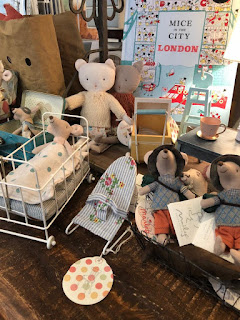 The cuteness was overwhelming. Do you see the little infant-mice bouncy seats? I got Magnolia that little mouse in the bed. And the bed. Which really rolls. And the mouse is wearing a ballerina costume. I may have been given a granddaughter for the sole purpose of giving me a reason to buy things like that. Do you see the little boy mice to the right with hats on their heads? They have rolled up sleeping bags strapped to their backs and they also sell little tents for the little camping mice and damn but I almost got August that combo because I think he would love them and I loved them but I did not. I could probably buy him a real sleeping bag and tent for the price which isn't the point but sometimes it's good to keep things in perspective.
I also started reading the book that I bought at the bookstore because I can't go in a locally owned bookstore and not buy something. I got Tara Westover's Educated and I can't wait to really get into it. There are benches all up and down the sidewalk making book-reading-while-waiting so very comfortable. Finally Mr. Moon came out, all spiffed up and handsome and we walked down to a restaurant and ate some shrimp and grits which were delicious but quite frankly, not as good as the shrimp and grits I make.
But they were good.

After all of that we were ready for a nap but forced ourselves to go look at some antiques which were fine but again- our plantation is pretty well furnished as well as stocked.

And then we drove home and we did indeed take a nap and when we got up and were fully awake we gave each other cards and I gave Mr. Moon his present from the Costco which is a set of wireless headphones (he can't find his old ones) and he gave me the most beautiful bottle of tequila I've ever seen.

Also a can of my favorite espresso and some chocolate.
It's like he knows me.
And I have made him some flan which I have never made before but last night I dreamed of babies, one of whom I actually nursed, and making huge vats of custard with thirty-six eggs from my chickens (I remember exactly- three dozen eggs) and the obviousness of that sweet milky dream makes me laugh. I always say that my chicken's eggs make me feel rich and they do and if there is anything more symbolic of love and nurturing than breast milk, I don't know what it is and there you go. They weren't even my babies or even my babies' babies, but so loving and precious and I was simply helping out the mother and she was happy about that. And it was all so very dear.
What a beautiful dream to have on the night of my thirty-fourth anniversary where we have celebrated a whole lot of sweetness and love.
Here's a picture Jessie sent me today. 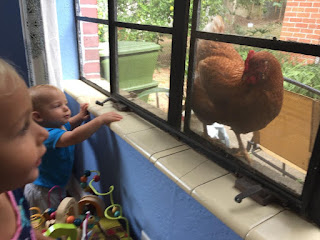 I think that sort of says it all.
Mostly.

And now it's raining gently and I feel very content here in our old house on our own little spit of land beside the railroad tracks with our own chickens tucked away in their roost.

I am grateful and I am glad to be here. I loved going out into the world but after a few hours, I need to come home to roost where I belong.

Thirty-four years.
We fell in love, we got married, we did some stuff.
And here we are.
It's pretty good, as our grandson August would say.
Pretty damn good.