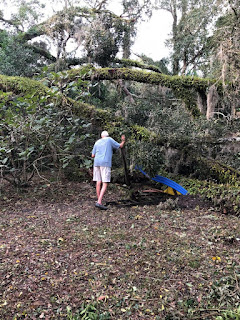 Woke up this morning and poured a cup of strong coffee that Mr. Moon had made and said, "Well, let's go look around," and so we did.
First thing we saw was a big huge branch down over by the garage but it didn't hit the garage so that was a sort of miracle. Then we let the chickens out because that was on the way to the big tree and the roosters had been crowing for us to come and free them since the sun came up.
And then we saw what we saw and it's impossible to tell from the pictures and quite frankly, even while looking at it, exactly what you're seeing. The tree is so enormous that you can't really grasp the scale of it all. But the picture above is the part of the tree lying on the play set. It literally stretches from almost-to-the-railroad track to my camellia bed and yes, I know that you don't know my yard but it's a good distance. 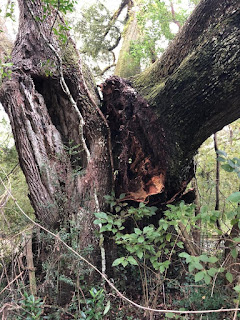 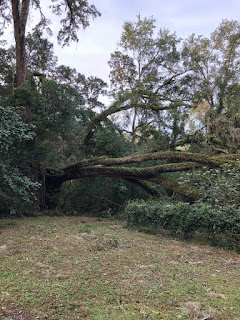 I am not entirely sure that the part of the tree which is closest to the tracks isn't very damaged as well. It seems to be leaning over the tracks a lot more than it was. I need to get out and walk the tracks to see what I can see from that side. I imagine that the railroad company will deal with the tree as they did when another ancient oak on their property lost a part of itself a few years ago. And thank goodness because they have the cranes and the knowhow and the giant chainsaws and so forth that the job will require. I am thinking they may just take the whole tree at this point and I am sorrowful for that. I remember the first year we lived here and we were experiencing terrible drought and after months of no rain I actually took the hose out to that tree and watered it which was about as helpful as peeing on it. I knew at the time it was a ridiculous and pointless gesture but I just had to do something. Anything. It was too precious to lose.
And now we probably have.

But even in saying that I feel so guilty. People have lost lives and beloved homes and towns have lost buildings and counties have lost roads. All we lost was a tree which was destined to die soon anyway. And it wasn't even really on my property but the railroad no more owned that tree than I own the birds that come to my feeder. I didn't own it either, but I loved it and respected it and quite possibly worshipped it and appreciated it every day I've lived here.

And hey- this is momentous- our power just came on. Like that. Like magic. We've been going along fine without it and honestly, the hot water heater hasn't even had time to lose all of its hot water so we have not suffered. For awhile yesterday, Mr. Moon had figured out how to get the TV working with generator power both to it and the router but then we lost our phone line and that was the end of TV and internet but it was fun while it lasted. And now we have our phone line back AND the electricity and I honestly can't even really believe it.

But I didn't come here to talk about any of this, really. Well, I did of course but something happened today that restored my faith in humanity and the universe or...something.
After we'd walked around the yard and saw not only the huge tree down and the big branches down but the thousands and thousands of smaller branches and twigs that carpeted the yard I just wanted go get back in bed and pull the covers over my head because not only had I lost one of the few things I actually worship, but those smaller branches are usually my job to deal with and I was looking at days of work.
If not weeks.
I couldn't even fathom where to start.
Here's what the sidewalk in front of the house looked like just to give you an idea of how littered the ground was. 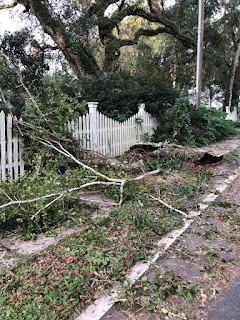 Like that, although there's a damn big branch in that pile.
So. I was sort of wandering around the yard trying to find a place with cell reception to see if my kids had tried to text me when a very cheerful man wearing a Super Man shirt drove into the yard on a bike. We'd seen him down the road a few houses, helping Ms. Carol clean up and part of me thought, well, here's the answer to your prayers, and part of me thought, Mr. Moon will never hire him because we can do it ourselves.
Anyway, he introduced himself and I introduced myself and he said he was looking for work and did we need some help? He'd do ANYTHING!
I went and got Mr. Moon and he talked to the guy and said, "Come on. Let's go."
And I want to tell you that those two men have my front yard and part of the back yard and one of the side yards looking better than they did before the storm. They worked like mad dogs. I brought them water and did a little bit of gathering of branches right behind the house and then I made some sandwiches and we all stopped and sat down at the table outside and ate our lunch and talked.
He'd told me his last name was "Clinton" so I asked him if he was related to George Clinton, the musician. 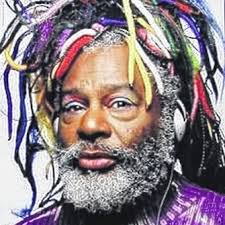 George is from around here and is famous and infamous and possibly the coolest man on earth. Our Mr. Clinton said he was, like sixth cousin or something and yes, he does live on Clinton Street.
Lloyd is a strange and wonderful place in some ways.
Younger Mr. Clinton is an artist too, but of the visual type and has just gone through a divorce and is trying to come back, financially. He has a seventeen-year old son which seemed impossible to me as he appeared to be about seventeen himself but he assured us he was actually 38. I had a seventeen year old child at the age of 38 too, come to think about it.
After lunch the men got back to work and I actually swept and tidied the porches and when they'd done all the work that Mr. Moon decided they needed to get done, we all sat down again for a few minutes and talked some more. I felt like we could have sat around and talked all day. He was funny and interesting and smart and we all seemed to get along very well.
"I like this guy!" young Mr. Clinton kept saying about Mr. Moon and when he left with some money in his pocket, we all hugged.
And I felt as if that man were the most direct god-given answer to a prayer I didn't pray I'd ever received and he was indeed Super Man.
And so is Mr. Moon who worked like a demon right beside him.

He's turned off the generator now and taken up all of the extension cords which have been snaking through the house and unplugged all the things that were plugged into them and plugged them back where they belong. 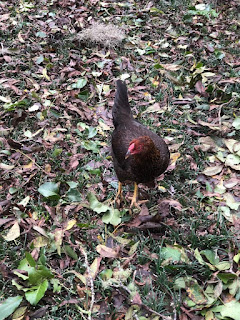 Look who made an appearance! Ms. Dearie! She's alive and well.

And tomorrow will be twenty-one days that Darla's been sitting on the nest which is about the amount of time it takes to hatch eggs. I don't know why but I just have a feeling we're going to get at least one little puff of peep. Golly, I hope so.

So. That's what today has been like and it's supposed to get down in the upper fifties tonight. They're clearing roads and trying to get power restored in Tallahassee. I don't think any of my kids have their electricity back yet. At least it isn't too hot. And they can always come stay at Mama's if things get dire.

And now I'm going to go make some supper. And guess what? We still have some bread and cookies.

Again- thanks for all of the sweet and good wishes and comments.