We're All Just Trying To Figure Out How To Live

It's been one of those days when any damn thing can make me cry and I know it's because I'm carrying something in my heart that is neither new nor earth-shattering but is just a fact of my life and although I wish with all of my heart that I could just accept and be completely at peace about it, I can only accept and will probably never quite be at peace but I am an imperfect person in so many ways and that in itself is something I can accept.

So. Jessie and I met up at Costco (my life is just filled with surprises, isn't it?) and did a good shopping. I actually broke down and bought one of those giant packs of toilet paper that is taller and far wider than August and I hope to goodness that this means I won't be buying toilet paper for at least a month. One of my favorite things about going to Costco now is that August gets excited about going into the coldy room as we call it and having me hug him up to keep him warm. As I may have mentioned before (haha!) August is not exactly in favor of outward physical expression of affection so having him WANT to hug me for whatever reason is a beautiful thing. He and Levon were sitting together in the seat and as I hugged them both, my youngest grandchild looked at me as if I'd lost my mind. He does not seem to notice the cold at all but it's probably just a part of his young life as all things are and he takes these things as they come and rolls with them.

We went to the Indian buffet after our shopping and August shared his food with me, as he likes to do. He picked up a piece of naan and as he presented it to me he said in a very professorial tone, "This is naan."
"Thank you," I said. And it was good.

And then of course we went to the Goodwill bookstore. August got to pick out some books and Levon enjoyed crawling about and pulling books off the shelf and I actually found two books I wanted to buy so it was a good day at the bookstore.
Here's a funny picture of August but he did not want to pose. 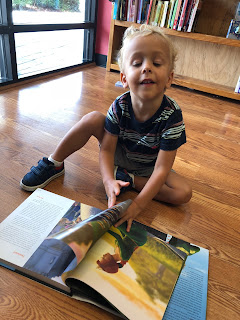 That was his one-second attempt at acquiescing to my request for a smile.
I understand. He was busy. So many books, so little time. 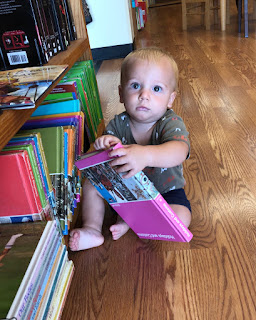 And Levon, who was busily attempting to find the tastiest corner of this book to gnaw on. He was rather serious today and I think he is teething.

One of the books I bought for myself is The 19th Wife by David Ebershoff, a fictionalized account of the real life of one of Brigham Young's wives from back in the nineteenth century. I am still eaten up with my obsession about Mormons and their religion and I simply can't deny it. I will probably eventually find something else to obsess about but at this point, there is no real end in sight. I am at the point, in fact, where I wish some Mormon missionaries would show up at my door so that I could invite them in and ask them questions like, "So what you do think about the Book of Abraham?" and "Did you know that Joseph Smith was not only involved in polygamy but also polyandry?"
Oh, I am so bad. So, so bad.
I am wondering what it really is that I am trying to work out in my head by filling it full of the stories of Mormons who have lost their faith. I will tell you that this is a subject which has fascinated me for a very long time, ever since I read a book by a Mormon woman decades ago who had left the church. One of my best friends when I was in Jr. High was a Mormon and I guess that started my interest. Although I never saw her wear any "garments" there did appear to be things in her life that were mysterious to an outsider and her entire family seemed devoted to a lifestyle which was completely innocent-seeming and so vanilla although she was allowed to wear Yardley Slicker lipstick before I was and to shave her legs before I was allowed to but I think that's because she was just a Mormon whereas I had a molesting stepfather who did not want to see me grow up in any way.
And oh- do I have stories about things that girl did on Girl Scout camping trips which I am sure haunt her to this day. I often wonder if she is still with her Temple-sealed husband whom she met at BYU. I have a feeling that she probably is.

Life is so odd, isn't it? The way things begin and the way they mutate and change and present paths to us, some of which are what we expected, some of which we never, ever could have.
I think we do the best we can, most of us, and that our hearts are probably in the right places.
Most of us.
One of the things I love hearing about in the stories of Mormons who have lost faith in their religion is what they are left with after they leave the church. Their beliefs mostly.
It seems to me that a lot of them are so very happy to have the freedom to believe what they want to believe, to be able to base their life decisions on what they feel is true rather than what their religion tells them is true. Big difference there.
And so many believe in kindness.
Kindness.
And love.

I believe in those things too.
No special underwear required.
Thank goodness. I hear those things are really, really uncomfortable and that's the last thing I need. I mean- we all know how I feel about bras.