Love, Pizza And A Pirate 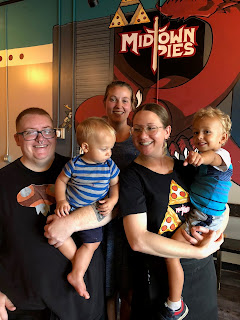 Really, I could rename this blog, "Where Did She Eat Lunch Today?"
I know. I know!
But I woke up this morning just yearning to see my May. That girl works so hard and such long hours that when she's off, she needs to do things like laundry and shopping and mostly...relaxing! She has a very physical job and she's on her feet for many hours at a time and anyone who has ever been a server in a restaurant knows that it's very stressful work. Add on to all of that that she's a manager and when that girl has time off, she needs to rest.
I'm her mommy and I say so.
So sometimes, when we haven't seen each other for awhile, I just have to go where she is and today that's what I did and Jessie and the boys and Hank joined me too. Lily had two toddlers at home again and the idea of dealing with the both of them sort of overwhelmed her so she did not join us but she was missed.
It was so fun. And so good. When Mr. Moon is out of town, I sometimes neglect some of the food groups shamefully. I may give them a nod but I find that eating a salad which someone else has made is so much more delightful than eating a salad that I made even though I have to say that I do make good salads. So I got a nice little salad at lunch and enjoyed every cold, crunchy bite of it. And also a slice because, well- Midtown Pies? Hello?
Delicious.

August asked May if he could have some dough to play with and of course, she made sure he got some. 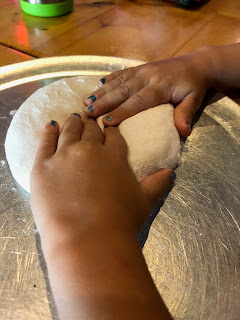 Note the blue nail polish.
When he got here yesterday, the first thing he said when he got out of the car was that some of his toenail polish had peeled off and did I have any nail polish? Now. I am not sure if this is related or not, but he had seen our friend Billy the day before and Billy, who is the ultimate stylista who makes up his own rules as to gender-identification, always has painted fingernails.
So I found some sparkly blue nail polish and instead of painting his toenails I painted his fingernails. I forget exactly how this happened but it's a beautiful color of blue.
"Mermaid blue" I told him.
I think that August's hands are beautiful. This picture does not do them justice in the least. They are not childish, really. The fingers are slim and that lovely color of golden brown which all of his skin turns in the sun and one cannot help but look at them and think of the playing of musical instruments, of strength and of delicacy.
Anyway, blah, blah, blah, Grandmother. He had a good time playing with the dough and yes, he ate some of it and after awhile we all came to an acceptance of that and I hope he didn't get a tummy ache but I bet he didn't.
Levon was happy with his pizza crust and bits of salad. He sat on my lap for quite awhile and grinned his gorgeous toothy grin at Uncle Hank who was sitting across the table from him.

May felt as is she was coming down with the cold that Michael has and as her mother, I think she is too. But we loved being with her and we got to chat for awhile as the restaurant emptied out after the lunch crowd had eaten and my soul feels all the better for that.

No less than four people, maybe five, shared the following video on my Facebook time line.

Now let me just say that this particular hen is a far better mother than I ever will be but it certainly does represent how I so often feel which is that if I could just keep all of my chicks under my wings in all weathers I probably would.
And thank god I can't because we'd have to put the grands in there too and that would just be ridiculous and controlling and weird.

Still. Sometimes I just gotta see and hug and love on all my babies and today was all about seeing and hugging and loving on May.
And doesn't Hank look great? He just got his hair cut by our beloved Melissa. Of course.

After lunch I totally had to gird my loins because I wanted to go to Joanne's Fabrics and get some new material to make Maggie another dress. I only felt like I was going to pass out once or twice so it was a success.
And I found this. 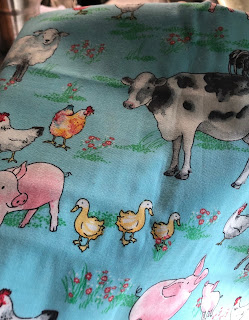 Now who among us does not need and want a dress made of farm animals fabric?
I bought the last yard and 7/8's they had and will hopefully get a little pair of shorts to go under the dress out of it.
I can't wait to get started.

And somehow, on this Friday night while the church next door is meeting and wailing I feel the need for some Keith. It's been a long time. But sometimes, only Keith will do.
Here he is in all of his pirate, eyelined, dyed black-hair glory. Have you seen this one, Linda Sue?


Y'all can run with the wolves. I'll be sighing with the Keith.