I Am Not Brave

I got invited this morning to go to some farm event with Lily and Jessie but I declined with thanks saying I thought I just needed to stay around the house today which I did. I took a walk, as I did yesterday, and although my mileage was not so much, I shaved about a minute a mile off my time.
This may not sound like much but for me, it is.

When I got home I did a few indoor chores and then went out to clean the hen house and put fresh hay in the nests and this is what I found. 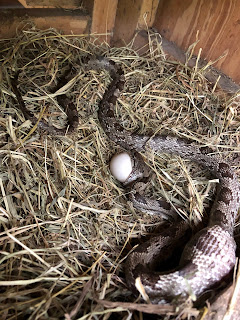 And we had just been talking about not seeing any snakes in the yard this year and how we hadn't had an egg-stealing snake in the hen house in forever and there you go. This was not a large snake and yet, it was slowly opening its mouth wide enough to take in an egg and if you look closely at the part of the snake down by the right hand corner, you can see that it had already eaten one.
Hungry motherfucker.
Ay-yi.
In theory, I do not mind snakes at all. Well, not non-poisonous snakes like this one. It was just a little  oak snake, harmless as can be, good at catching rats and mice and obviously, helping to control the egg population. Of course I immediately took that picture and then sent it to Mr. Moon and to Jessie and Lily and then I got the pitchfork and carefully, without harming the snake, managed to get it out of the hen house. Mr. Moon immediately started texting me about what I should do next. First he thought that I should kill the snake and had a specific tool in mind (a bush hook?)  with which to do that.
Now you have to understand that I have seen this man carry other snakes which have been captured in our hen house in sturdy bags to a far and undisclosed location to release alive but he has also witnessed a snake killing and eating a young chick which has sort of made him feel less lenient and tolerant of snakes in the hen house.
I answered him that no, I could not kill the snake and simply removing it from that nest was the extent of my snake abilities. He then said that I should "put it in a box" and that he would take it and release it somewhere.
I tried. Oh, dear reader, I tried.
With the pitchfork, of course, because I was not getting any closer to the poor serpent than the length of a garden implement. 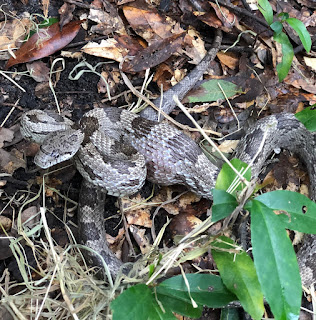 First I could not find a box. Then I decided just to use a small ice chest. Then I did get the snake in the ice chest but the snake knew that was not a good place to be and slithered out before I could get the lid on it.
I tried again.
And again.
And again.
At which point I said, "Fuck it," and stopped trying. Its little eyes just appeared to be pleading with me to give him one more chance.
Right.
So I texted Mr. Moon that no, I could not get it in a box and that was that. I'd almost had a heart attack so forget it.

I am SUCH a wuss.

Meanwhile, as all of this was going on and I was trying to weave a snake into the tines of a pitchfork and sweating like I was in the waiting room of hell and getting and sending texts to my husband, Lily and Jessie started sending me pictures of the day's outing.
Here are some of them. 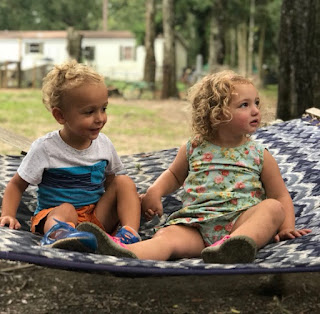 They are holding hands! 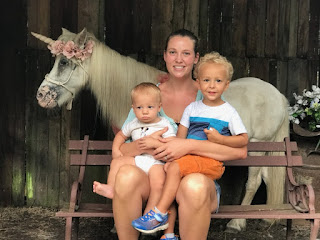 I don't think that Levon is convinced about the authenticity of the unicorn. 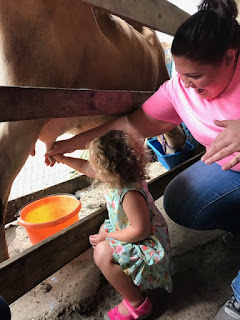 They actually got some milk out of that udder! 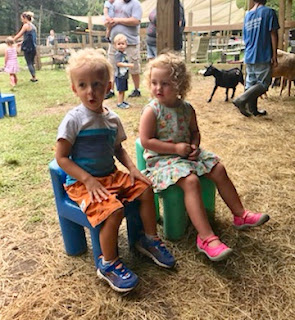 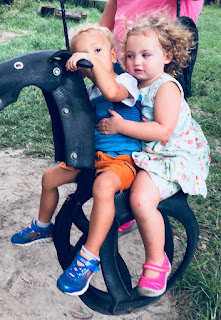 There is something about this picture which is absolutely magical. Would you look at that girlchild and the way she is looking at her cousin?

And I gave up the opportunity to be there with those pretty babies for a walk and snake wrangling?
To add insult to injury, the snake is still at loose and I am in such pain that if I had any sense at all I'd be in the tub with Epson salts or in bed.
I have no sense.
I ironed some shirts.
Which means I shall surely go to heaven.

Tropical Storm Gordon is passing by us in the Gulf today on its way to Louisiana and I hope all of the best for the people there. We have been getting gusts of wind and some nice rain from it, on and off. It's funny how you can walk outside and know just by the way the air feels that there is a big storm somewhere nearby.

When I was walking, I swear I could hear the trees discussing it amongst themselves in the very tops of themselves, a conversation of leaves. I eavesdropped as I made my way down the gray road, chopping off the miles, one step at a time. The trees did not seem to mind me and I felt honored by that.

I hope that snake enjoys his healthy meal. Do you suppose it hurts when he poops out the eggshells?
I have no idea.