Last night while I was dreaming it would appear that someone came and injected me with a drug perhaps called "NeverWake" or at least that's how I felt this morning when I did, in fact wake but I could not shake myself into the realm of actual wakefulness even though I pretended I was awake and I guess that's good enough.

I slogged through the morning while Mr. Moon went over to Lily's to do some target-shooting with the bow with Owen and got myself ready to go into town for yet another awesome family luncheon, this one with every one of us except for Jason who had to work and we missed him.

May and Michael have Michael's beautiful mother Chris visiting them and May suggested that we all go out together so that we could hang out with Chris and no one would have to cook and that was an excellent idea and of course we went to El Patron because not only do we like the food but they know us and they do most of their business at night so our ten adults and five children or whatever we were did not overstrain the staff. 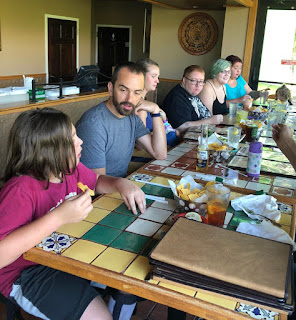 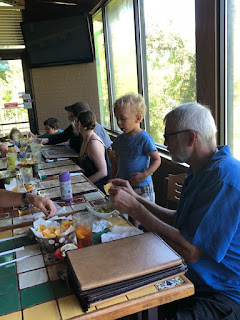 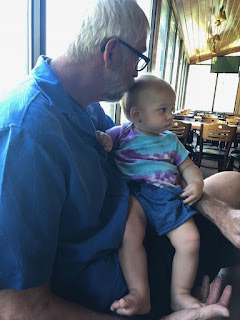 Levon was overwhelmed. So was his grandmother. 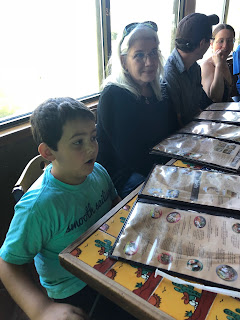 Gibson sat next to Chris and engaged her in conversation, as he does, and at one point announced that he and she would be Christmas friends FOREVER! I am not sure how this statement came about but it was reported to me by two reliable witnesses, one of them Chris herself. Gibson is just about the most social person I've ever met. The word "stranger" is not in his vocabulary.

Oh, my family! I would look around and listen and catch the flying bits of so many different conversations, 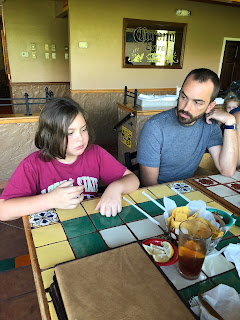 (Pretty sure this one was about the best methods of cooking and eating hotdogs.)

serious and non-, laughter, catching-up, helping children, sharing food, passing hot sauce, ordering of drinks, and on and on and on. Levon was passed about, Maggie visited first one of us and then the other and by the time it was all over, she and August were running around and had to be corralled and taken outside to the empty deck where Vergil played freeze-tag with all of the kids who can run which is everyone but Levon, of course. There's an old cash register on that deck and the children love to play restaurant there. At one point, Gibson was the bartender and cashier and Owen was the chef. The prices were a bit high- I believe that Vergil was told that his Pina Colada would be sixty-thousand dollars, but the food and drinks were delicious.
Even Maggie and August got into the act and I got this little video which I adore and cherish because once again, here we are watching those two cousins interact and this time, make-believe is being tossed into the mix which is the very foundation for intelligent thinking and a lifetime of original thought to my way of thinking. My favorite part is the last ten seconds or so where August tries to tell Maggie how to do her job and she stares off into the distance and says, "Ummmm....no."


That's my girl!
Do it the way you want to, Magnolia June!
Of course later on she got mad because Gibson wouldn't let her run the cash register and tried to bite him on the back but that's another story. Plus- no blood, no foul so all was well and Gibson remained cheerful in his task.

Sundays can generally bite my ass but this one was not so bad and getting that video was priceless for me. El Patron was as kind and tolerant of us as they always are and I have a feeling that when these children grow up, they are going to remember eating there with deep fondness.

It's still crazy hot. I got four eggs today. I am going to make a casserole with the leftover snapper from last night and it will involve noodles.

I asked August yesterday how his marble was doing.
"Pretty good," he said.
And that's an accurate description of this Sunday in September in North Florida, 2018.