I Survived Another Sunday

I cooked my ass off for today's brunch and it was worth it. I made pancakes, of course, and bacon because that's just the way it must be. I also cooked veggie sausages for Lily who is being vegetarian right now and I cooked some turkey sausage and don't ask me why. It was...okay.
I made a beautiful casserole with potatoes and broccoli and peppers and onions and cheese and eggs. I toasted bagels. And there was fruit.
Yep. It was all pretty nice. 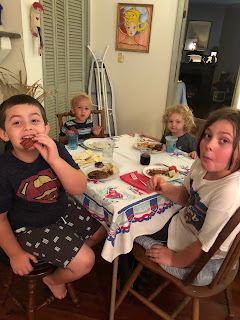 You may notice that August's plate is empty. That is because he ate everything on it before everyone else had barely begun. For such a tiny sprite, the child can eat more and faster than you'd ever believe. And when he is done, he is done, and ready to move on to the next thing. He asked me if I would help him wash his hands and I did. Levon ate some pancakes and some eggs and some turkey sausage. And bagel. And fruit. Probably some bacon. Then had some mama-milk. That boy is growing!
After all of the kids were through eating, they went into the Glen Den to play. This thrilled August. His mother went in to check on the activities there and asked if everything was all right.
"Yes," he said, "Can you leave now?"
I love watching all of the cousins together. Owen is such a good big brother and big cousin. I believe that August thinks that he and Gibson are gods. They can do everything that he longs to be able to do. He and Maggie got along very well today although I think they are already leading each other down the trail of naughtiness. They were upstairs and Lily called them and heard August say, "Come on!" and then a door slammed.

After brunch it was pool time. 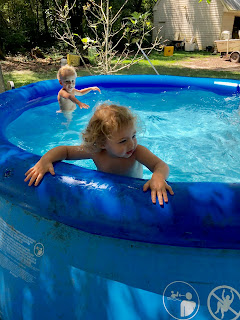 What could possibly be more fun?

Boppie and Vergil got in the pool and were attacked by August and Maggie. It was just a big old funfest.

So that was brunch at Mer and Bop's and I bet there were some naps taken this afternoon. I asked August if he'd enjoyed playing with Maggie today and he said that yes, he had and that she had given him one hug. This is just about the correct number of hugs for August. If there must be any, that is. I think that he views hugs as a social necessity whereas Maggie has always hugged for the sheer joy of hugging. They may look like twins with their blonde curls but they are as different as night and day.
And isn't that beautiful?
All of these children are so beautiful to my heart and my soul. I have noticed recently that if I have not seen Owen and Gibson for awhile, I dream of them and in my dreams, I worry about them. Last night I dreamed that Owen was taller than I was and I told him that today. He said, "By the time I'm ten, I probably will be."
"You're probably right," I said.
"Huzzah!" he said. I have no idea where he's picked that one up. And then he said, "And it's sort of sad."
Sigh.
I told him and Gibson that they can "probably" come over tomorrow to hang out. And they probably will. They get Labor Day off and why not? They can come over here and complain about there being nothing to do and be constantly hungry as well as they can do that at home.

And I'm about to go try and make a decent soup out of the leftovers in the refrigerator. The trashy tacos were fine but I have about ten pounds of the rice and beans leftover. And some venison. And okra. And green beans. And hell- I don't know what all. So I will do my magic trick of taking leftovers and making more leftovers out of them.

Lord. What would I write about if it wasn't for food?

I could write about television because I'm pissed about television right now. Since we got rid of Dish we now have a cobbled-together system of Sling, Hulu, some local channel antenna, and Netflix. I told Mr. Moon it was like getting rid of the refrigerator and putting all of the stuff that was in it in tiny little refrigerators located all over the kitchen. Which cabinet is the mini-fridge with the butter in it? Which one with the yogurt? Which one with the hot sauce?
And so forth.
I end up just watching stuff on Netflix. I have no idea what in the world I'll do when I've finished watching all of the Parts Unknown episodes. Since I don't really watch enough TV to care I don't know why it all pisses me off but it does. To reconnect Dish we'd have to cut down some trees. And that seems extreme. No cable in Lloyd.
I guess I should just be grateful we have internet service.
And I am.