From Grandchildren To Blood Sacrifice. Yeah. That Makes Sense 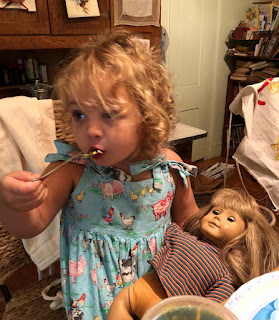 When Maggie got here this morning she went straight for her baby dolls. This is just who the child is. And she loves pretending to be a mommy. She has never been "encouraged" in this sort of play but seems to come by it completely naturally and loves to pretend to put the babies to bed and to wake them up and she gives them lots and lots of kisses so of course she is patterning herself on what she sees around her and how her mommy takes care of her and I think it's beautiful. Owen did the same thing with his stuffed animals although he often pretended they were his wives.
One at a time.
He wasn't a Mormon.
She asked me for some pancakes and eggs when she got here and I told her I wasn't making pancakes this morning but would happily cook her an egg, which I did. She fed some to her baby and ate some herself and I think mostly she was just happy to have me do her bidding. Her hair was especially curly today, with pretty little ringlets and wildness abounding. I decided to text Jessie with an invitation to come out and play with us and she said that sounded like a good idea. I told Maggie that August was coming and she was very, very excited.
"And Levon?"
"Yes. And Levon."
"And Aunt Jessie?"
"Yes. And Aunt Jessie?"
"And Uncle Hank?"
"No, Uncle Hank isn't coming today."
"And Rachel?"
"No, Rachel isn't coming either. But you'll have fun with August and Levon."
"Okay!"

And so she did. I think all of the children had fun. 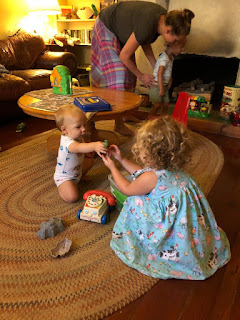 Maggie loves Levon so much. She wants to squish him with her love the way she used to squish August in big hugs. She is a bit more polite about that sort of thing now but she will never not be a hugger. Today she asked August for a hug and she held her arms out to him. He did not answer her but crammed half a banana into his mouth and stared into space, chewing, acting for all the world as if he did not hear her. Jessie and I cracked up. But Levon is a real live baby doll and she can hug him and she does and if I am holding him, she wants me to hold her too and I have no problem with that at all.

Here are some more pictures. 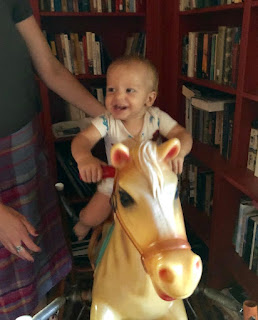 Levon, like all of my grandchildren, love that rocking horse. It makes him laugh and he can bounce it himself, always with a protecting hand right behind him. I am so glad that we bought that horse when Owen was a little guy. 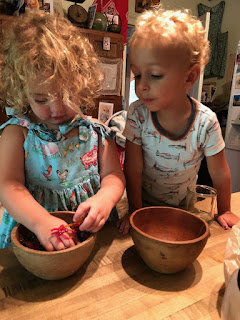 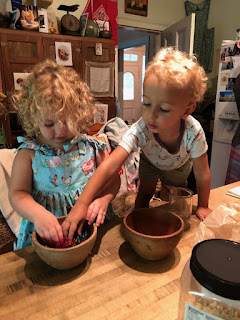 Maggie and August playing with the cocktail mermaids and animals that yes, I DID finally buy off Amazon. Monkeys and donkeys and giraffes and so many mermaids. They make a gorgeous bowl of shiny fun. 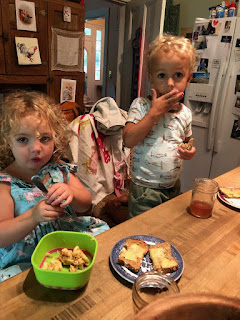 Lunch. Oh, my beautiful babies! August's hair was quite curly today too and I am not sure I will ever get over the shock of having two grandchildren so close in age with such blond, curly hair.

When Lily finished with her massage and came to get the girl, she did not want to go. Who could blame her? We had had so much fun. But all good things must come to an end eventually and so she kissed us all good-bye and went home and August got to stay a little longer and I read him some books and answered the question "why" about fifty times. I love it when he asks "why" at the end of a page and the next page answers the question for him. That helps a great deal.

And that was how it was and he left with his mother and his brother I kissed him good-bye and told him what I'd told Maggie which was something along the lines of "Thank you for coming to see me and letting me play with you," and I kissed the top of his head before he could complain. Same with Levon. And off they went and there I was, alone again and not unhappy about that either. I slowly made my way through the house, tidying up this and that. Books and the puzzle we'd done and toys and mermaids and animals which can cleverly be hooked to the side of a rum drink glass if one uses them for that purpose and tricycles and snacks and all of the detritus of what taking care of little ones requires.
At one point today I asked Jessie, "Why would anyone in the world want to open a day-care?"
Neither of us could figure that one out.
But a little bit of a Mer Mer daycare is quite all right and soon the house was set to rights and I laid down for a little while and read and had a tiny nap and then got up and started what is going to hopefully be something like a venison pozole or posole, depending on what recipe you're looking at. I pressure cooked the stew meat which is by definition tough and now it is simmering in a sauce made of onions and garlic and tomatoes and salsa verde and chilies and chili powder and cumin and oh yes, one strip of bacon. It has no tripe in it and I am going to put both hominy and fresh corn in it so it is no more traditional than Taco Bell but hopefully, it will be good with some chopped cabbage and avocado and lots of cilantro and lime. It's too hot for soups or stews but at this point, sweating is our default setting so maybe we'll just get rid of more toxins although I have no faith in that toxin-ridding school of thought. If it were true, I'd be as clean and as free of them as a new-born babe and I'm pretty sure that is not the case.
So far, however, sweating has not killed me.

I think we have our rooms for Cozumel. We might have to leave for one night that they are already booked for but Mr. Moon has suggested that we take the ferry over to the mainland that day and rent a car and drive to Chichen Itza to stay at the Mayaland Hotel and Bungalows Resort where we stayed one night before, many years ago and which was absolutely one of the most magical and amazing places you can imagine. The hotel is built among and in sight of the ruins themselves as well as beautiful gardens and flat-out jungle and staying there was the closest I've ever come to time travel in my life. I love my husband so for thinking of this, for making this suggestion. 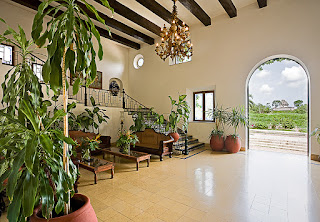 It is a place where you could encounter Indiana Jones in a pith helmet or a Mayan ballplayer wearing a jaguar skin or a Mayan priest placing the bloody heart of an enemy in the receiving basin of Chac Mool. 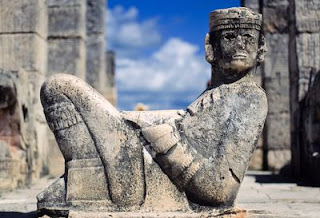 All right. That's enough of me tonight. I will be interested to see where my dreams lead.