There were a ton of back-and-forth texts this morning concerning possible plans. Rachel hadn't seen anyone for awhile and was wanting to get together with folks but Monday is the day Lily takes care of her friend's son, Wiley Cash, and Jessie was having a fairly peaceful day at home so that sort of went down the tubes. However, I decided that I really need to put more effort into the grandmother thing with Owen and Gibson and so instead of just having them over here, I offered to take them to lunch and a movie.
This was pretty earth-shaking, truthfully.
They joyfully accepted and I texted Rachel and she and Hank met us at Japanica where we ate delicious sushi and bowls of miso soup and salads with ginger dressing. The boys were very well behaved and I was so proud of them. They mostly talked to Hank and Rachel about Pokemon and other things that I have no knowledge of or interest in (take me as I am, Lord, take me as I am) so I actually had a fairly peaceful meal wherein I didn't have to participate a whole lot in conversation and best of all I did not have to fake any desire to hear anything at all about Pokemon. Or whatever they are. Pokemons? Pokemen? Pokepeople?
Don't ask me.

Then we went to the movies. Just me and the boys. Rachel and Hank had errands to run. Hank has just moved in with Rachel and they needed a few things for their nest.

The movie we were going to go see was Christopher Robin and I went in knowing it was going to be pretty awful and it was. But it was a movie I could take the boys to. As we sat in the uber-comfortable reclining seats with power buttons watching the previews, Owen said, "My life is so happy right now," and that made the whole thing worth it.
I did not spill the popcorn. We did not spill the Icee that the boys shared.
Okay, to be honest, Icee was spilled before we paid for it but oh well. The incredibly beautiful seven-foot tall woman who works behind the popcorn counter came out and cleaned it up and told us that it was no problem and to get another cup. Owen handed it to me and said, "I would feel more comfortable holding the popcorn and letting you get the Icee."
And that's how we did it.
And I am not kidding about that woman. She is a giantess! Being married to a man who is well over average height, I have some perspective on the situation. I think she would dwarf Jessie and Lily who are both in hair-splitting range of six-feet. If there was a god, she wouldn't be employed at a movie theater making popcorn and cleaning up Icees, she should be sitting on a throne where we mortals would be worshipping her in ceremonies involving gold and rubies. Like we should approach her with our eyes averted and offer her tribute. She's magnificent!
And obviously, she's very sweet too.

So. The movie.
Well, it was a Disney movie and it may well have been one of the worst I've ever seen. It was more than a little creepy, it broke no new ground, and Pooh himself was sort of pitiful as he kept stating that he was "a bear with few brains," with his flat, glassy expression dominated by his flat glassy eyes. And quite frankly, I could go the rest of my life without seeing another CGI bear suck down honey like a boozehound with a bottle of Mad Dog. Also, references to the other Disney Pooh movies (animated) abounded and no, I did not need to hear the Tigger song and it was not cute.
Eeyore was okay. Eeyore is always okay. Eeyore is one of my spirit totem animals.
Gibson was not charmed. Owen hung with it but said when it was over that he really didn't like the "lovey" parts.
I myself would have called those the "sickly sweet bullshit Tao of Pooh parts" but whatever.

Spoiler alert: this is pretty much the message of the movie: 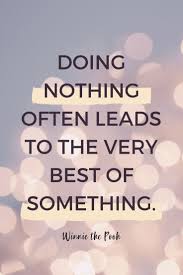 Still, we had a good time and that's what it was all about. Here's Gibson posing in front of some cardboard movie display. 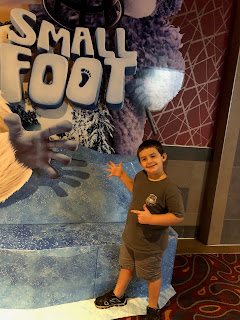 I love that boy. He refused to eat any popcorn because it gets stuck in his teeth. Owen and I had no problems with that.

I took the boys home and we gave Maggie the treat I had promised her when we left because she was so sad that we were going without her. I bought a bag of gummy animals and she happily shared them with everyone. Wiley said "Good-bye, Grandmother!" when I left which touched my heart so much. And then I proceeded to get my car stuck in Lily and Jason's yard due to the massive amount of rain we've had lately but Jason pulled me out with his four-wheel drive vehicle.

And now it's raining again, coming down so hard it sounds like the water is slapping the ground.
We got five more eggs today. Ten eggs in two days!
And FSU is playing someone tonight in football and it's on TV and Mr. Moon and our across-the-street neighbor are going to watch the game and that sweet man, my husband, brought  home chicken wings and a veggie tray for them to eat while watching it so I have no decisions to make as to menu.

I may be in bed tonight by nine. Hopefully, I'll be in bed by nine. Cuddled up with a cat and a book and as happy as a grandmother can be.