There Is No Deodorant In The World Adequate At This Point 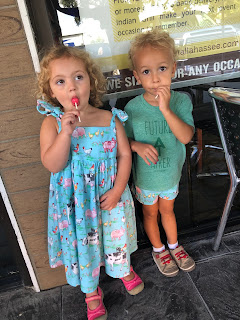 When I gave Maggie and August their Mer-made farm animals clothes today, Maggie took it in stride as she's gotten so many dresses that I've made that it's almost a joke by now. August liked his shorts okay but honestly, he wanted that dress. He gently took it from Maggie and held it to himself and I said, "August, do you really want Mer to make you a dress?" 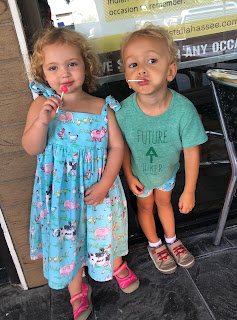 "Yes," he said.
And I'm going to get started on it right away.

The little cousins and I went into the restroom to change into their new clothes and when I held August up to the mirror so that he could see his shorts he said, "I love you," which just about killed me. We were in the Indian buffet restaurant and both of those children kept sharing their food with me. I couldn't eat all of the food on my own plate because they were so sweetly giving me orange sections and naan and butter chicken. It was a festival day at Persis Grill and they had a small altar set up with Ganesh and a candle and incense and special foods, all of which were on the buffet line as well. So we ate like a Hindu god and it was good.

Here's Levon being happy about it all. 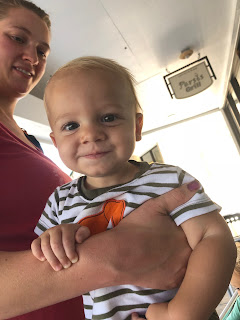 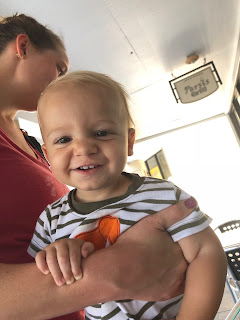 He's so funny. After we ate, Jessie and I went to Big Lots and Levon is fascinated and thrilled by hanging signs and actually, anything hanging from the ceiling. He laughs and laughs at all of them. Jessie says he's going to be the kind of kid who jumps up and slaps everything above him.
She may be right. He thought the giant blow-up ghost and goblin they had at the front of the store were the funniest things he'd ever seen. He was full-on losing it, laughing at those things which of course makes all of us laugh and by the time we left Big Lots, I was in a good mood. 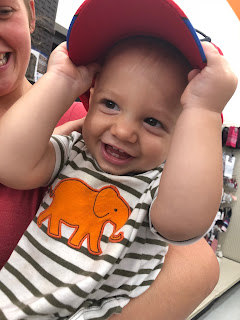 How could I not be?
And besides all of that, I got to lap cuddle with both boys. I was holding Levon, and August wanted to join us. I think he was having a little Mer jealousy today. He did the same when I was holding Maggie in the restaurant. I can hold two babies at once. No problem. 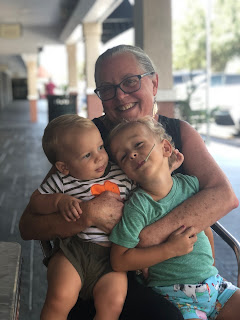 And then Levon crawled down and I asked August if I could hold him like a baby. He laughed and said I could and then I told him the story of how I'd held him right after he was born and rocked him and told him a story. 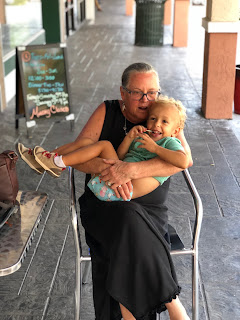 I told him about how I'd held him, fresher and newer than anything on earth, about how his mama and daddy met and fell in love and decided to get married and have a baby and how that was August, and about all of the people who were so very happy he was born and who loved him so very much.
He liked hearing about that story today. He asked for it again.

So once again my children and my grands helped me get my head out of my ass and I took a walk this morning too, which helped a lot.

I am SO over summer. This heat is killing me and I just went out and picked a few okra, the ones that aren't a foot long and woody as a canoe, and got ant bit and mosquito bit and I am just tired of this shit. I'm not just tired of it. I am sick of it. I think about people who work outside and I honestly don't know how they do it. How can they possibly drink enough to stay hydrated? How can oral intake equal sweat output?
And I say all of this in full knowledge that the Carolinas and possibly Virginia and Georgia are about to be blown off the map and that I should be down on my knees thanking whatever gods have control of this sort of situation (Ganesh?) that we're not in the path of that storm here.
Do you know they are talking about expected rainfall not in the inches but in the FEET? That there are eighty-foot waves off the coast already? EIGHTY!
Yes. We've always had heat.
Yes. We've always had these storms.
But storms of this size used to come a couple of times a century, not a couple of times a year. And the heat had broken a bit by this time in September.

My air conditioner is rattling on and I am a big fucking hypocrite, adding my own First World poisons to the atmosphere of this planet.

What am I going to be leaving to these precious grandchildren of mine? If I think THIS is hell...

And here I go to the kitchen where I'll turn on the fan so that cooking won't be such a hot chore even with the AC on and I'll take my clothes out of the dryer because I'm a lazy woman who didn't take the time to hang her clothes on the line and if any of my grandchildren ever read this when they are grown and the planet is sizzling and roiling and quaking and the oceans are boiling and filled with garbage and a fresh mullet is something only dreamed about, much less a grouper or a snapper or a nice can of tuna, I can only say, "I'm sorry."
I am so sorry.

Hey! I drive a Prius!

Oh Ganesh. Pray for us now and at the hour of our death.
Here. Have some incense. And a sweet dumpling.
Are we forgiven?
Yeah. I didn't think so.

Keep loving, y'all. Keep on loving. Let's try not to give up hope and doing what we can.