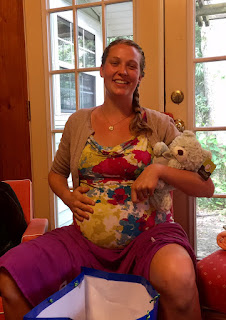 What a perfect baby shower! There were only eight of us there and we were missing a few ladies who couldn't make it but being such a small group of us made it so sweet. We could all join in one conversation and there was much laughing and eating and...
facials and foot massages!
We don't need no stupid shower games.

Liz's house is just amazing. It is as colorful and as interesting and as eclectic as she is. Two of my daughters have lived with her. Jessie rented a room with her when she was in college and May and her first husband lived with her when they moved to Tallahassee. Living with Liz has to be the best of all worlds. You are absolutely protected by a supreme mother bear and you are surrounded with music and art and fun and the most wonderful people. Liz was with me when I had Jessie and I'll never forget that.

Here's a present Liz got me recently in Asheville. 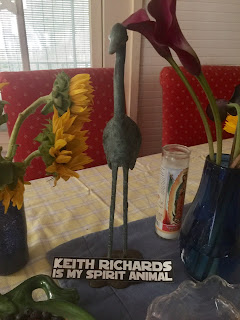 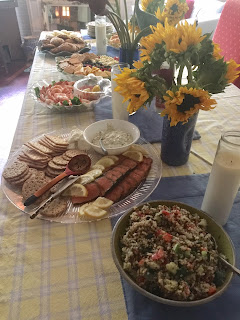 All of it was catered by Costco and Publix. I had so much fun in Costco buying the party food which always looks like so much fun but which I never have an excuse to buy. Fancy cheeses and crackers and baguettes and organic berries and smoked salmon and quinoa salad and shrimp cocktail AND a Tres Leches cake. There was so much food left and Lily and Jessie took a lot of it to serve tonight at the deer blind raising event.
Which I am gracefully declining to attend.
Mer needs some alone time and Mer is getting it right now.

So it was a simply beautiful day and oh! here's the blanket I made for the baby yesterday. 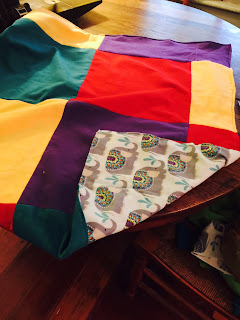 I'm calling it a scrap blanket because I made it out of flannel scraps from quilts I've made the children. It's sort of a hot mess but it is soft. I just cannot wait to meet this new child whom I am still calling King Richard. Gibson really does think that Jessie and Vergil are going to name him that. They still haven't decided on any names yet. Vergil is most particular about this process. He doesn't want to use any name that comes from the Bible which eliminates approximately 95% of all of the names in the world. I suggested today that they name the baby Mohammad but I'm pretty sure that that one isn't in consideration along with all of the other names I have suggested. Vergil did suggest that they name the child Jesse because Jessie was named after her grandfather, Jesse, who was named for his Aunt Jessie. I see a beautiful symmetry in this and if Jessie can get over her feeling that this would be too egocentric, I think it would be a perfect name. And her daddy would be so happy to have a baby named after his daddy.

At the end of the day, this is Jessie and Vergil's decision. Not Gibson's nor mine nor Mr. Moon's. And just as with August, they will settle on a very fine name. Of this, I have no doubt.

And before I sign off, I must inform you that August Glinden had his first official poopy on the potty today.
Are we proud?
You bet!

It's the little things.