And I Didn't Even Tell You About The Fried Pickles 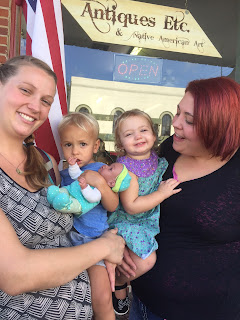 My dream for the week came true today when Jessie and August and Lily and Magnolia AND Jason and I all went to the small and very fine little town of Monticello. And oh, it was everything I wanted.

We started out at the animal shelter thrift store and we got lots of treasures and August and I played tea party for quite awhile, pouring pretend tea into a miniature mug and stirring our pretend milk and honey and sugar into it with a souvenir spoon and tasting it by turn. I love watching children begin to understand pretend. It is truly one of the most fascinating things. That look on their faces when you first start to play these imaginary games with them and then, the quick way they jump right into it and want to do it more and more and begin to offer you sips and spoons and want to pour the tea themselves.

After we finished our shopping at Wag The Dog, we went to lunch and sat outside and August and Maggie each went from highchair to bench, back to highchair and back to another spot on the bench, generally depending on where the best food was at the moment. They also seemed to have the need to kiss all of us in turn, prompted by some inner voice, I guess, which would send them scuttling around to deliver the kisses. Especially Maggie who is the kissiest baby I've ever met and a very good influence on the more reticent August. She still likes to kiss him too, although she does not squeeze him to death while doing it the way she used to.
I believe he appreciates that and sometimes, he even initiates the kisses himself.

It was just wonderful. I love being with the babies with parents around because that is when I get to be most relaxed about it, not being responsible for their lives quite as intensely as I am when it's just me and them. I am mostly responsible for making them happy and holding them and loving them and having conversations with them and just...simply...looking at them.

After lunch Lily and Jessie and August and I went into a little shop while Jason watched Maggie. It's a shop that sells lady's clothing and jewelry and handbags and shoes. The lady working there was very sweet to August, playing peek-a-boo with him with the dressing room curtain and talking to him and then she said, "Oh! You have to try on the wigs!"
And boy, did she have some wigs.
At first August didn't quite know what to think. Okay. He didn't know what to think by the time he'd tried all the wigs on either, but he tolerated it and no one forced him and every time the lady would put one on his head and I'd say, "Go show Mommy," he'd trot over to where his mama was and show her and then he'd take it off. And of course, I had to take pictures. 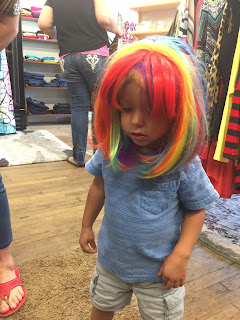 He held his head so still and was so serious about it. 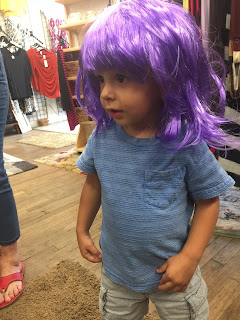 It freaked Jessie out to see him in the purple one because she used to have a purple wig and she said that when she saw him in it, she felt like she was seeing herself. 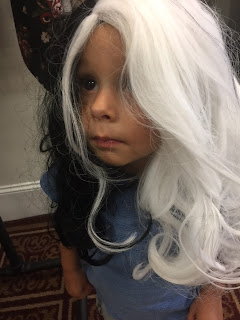 This one was my favorite. The Cruella DeVille wig. Quite fetching, don't you think?

After Lily bought some new shirts and a pair of pants she had to leave because they had to go to the grocery store before they picked up the boys, and Jessie and I came on back to my house where we fed chickens and looked for eggs and played with toys and read books for a little while.
And then they went home and I actually did the smallest amount of housework, oiling the piece of wood furniture my bathroom sink sits in and doing just the tiniest amount of dusting and sweeping and I cleaned a few mirrors and none of it added up to much at all but still, there's a sense of tidiness that there wasn't before.
And oh...it is this time of year again. 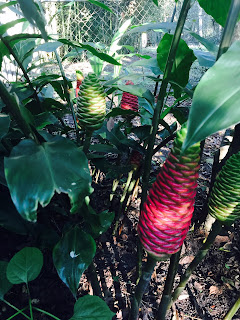 The pine cone lilies are back! The hallway altar is now decorated in a new seasonal arrangement. 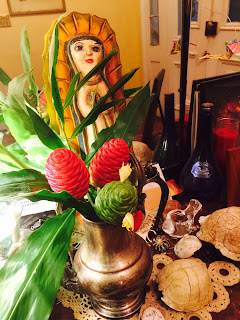 Fall, for me, has nothing at all to do with the dreaded pumpkin spice and everything to do with beauty berry, hurricane lilies, pine cone lilies, the bloom of the firespike, the blooming Confederate roses, and the Sasanqua camellias. The fire spike is beginning to bloom in my yard with its flower which looks like a hummingbird's invitation to the best buffet luncheon in town and I noticed the other day that my neighbor's Sasanqua is beginning to bloom, it's fragile blossom dropping pink petals on the sidewalk almost as soon as they open. I saw my first Confederate rose today, opened fully on the tree-top tall bush beside my porch as I was kissing August good-bye. "Ah," I said. "The prom queen of the flowers," which is what I always say and I probably always will. The camellias are budding up and it all reminds me that people who think that Florida does not have seasons just do not pay attention.
As so many beautiful things are, the changes are subtle, but so very real.

I have nothing profound, much less cosmic, to end with tonight. Not that I ever really do. It's just been an ordinary day in a ordinary life filled with all of the sweetness that that such a life can hold.