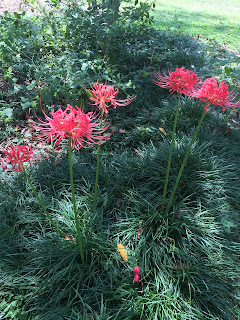 That's another picture of hurricane lilies I took yesterday. They are spectacular this year and seem to be popping up in places I've never seen them before which is odd. But each one is a nice surprise.

I'll be going into town soon to go with Jessie and Vergil and August to an appointment for an ultrasound. At one point, Jessie's placenta was lying a bit low and her midwife wants to get a look at where it is now. And of course, we want to get a look at King Richard although to me, ultrasound pictures always make the baby look like an alien. "See the nose?"
Uh. Not really.
The visual sense is not my best sense.
But it will be fun.

Maurice and Jack had a spat this morning and Maurice ran into the porch and "accidentally" slashed my foot while she was in super attack mode. She also slept on my head all night.
The chickens are talking and bawking and I do believe I would find two very fresh eggs if I went out and checked the nests.

And that's the news from Lloyd this morning. A lot of nature but not too much.

Hope your Monday is going well.