Professional Worrier, At Your Service

I woke up this morning with a raging case of anxiety. The kind that has no anchor upon which to tie the ship but which just causes me to float on those choppy seas with no explanation.
I finally took an Ativan because it wasn't going away and my stomach felt like I was going to puke but not because of anything physical, just the anxiety. Like butterflies in the stomach but butterflies that you get before you go onstage and don't know your lines or maybe even which act you're supposed to be doing.

I talked to Jessie because we were making plans to go to a nursery where the native plants were buy one, get one, and I told her I was having anxiety but that I was going to be okay and we discussed how it's very much like her arthritis. Some days she wakes up and feels absolutely fine and some days she wakes up and she knows she's going to need to take medication. You learn to live with the situation and you get through it and you adapt and you do the damn best you can.
That made me feel better although I told her that since this is a "mental" illness rather than a "physical" illness, there is an element of guilt and shame attached because no matter what we know or what we do truly believe, there is some part of us which thinks that if we'd just...I don't know...choose not to have anxiety? we'd be fine.
"I hope as you get older you get over that," she said.
We both paused.
"I don't really see that happening," I said.
"I don't either," she said.
And there is peace in acceptance.

I love my children so much. They have had to suffer the consequences of my problems their entire lives and some of those consequences have not been pretty. Misplaced anger, flattening depression, an inability to focus where I should have focused which was directly on them as they were growing up. I tried but I surely did not always succeed.
The things my husband has had to go through are just as bad if not worse.
In my lowest times I have wondered why any of these people still love me at all. The fact that they do is absolutely the greatest mysterious blessing of my life.
And I owe them my life. Many, many times over.

But today was okay and I went into town and picked up August and his mama and we went to the nursery and Jessie looked at plants and picked some out while I just played with August, following him around as he went from fountains to fairy-furniture to animal puppets to wind chimes. It was lovely. There were so many people there but the people at plant nurseries (especially one like this one which does most of its trade in native plants and crafts) are like the people in libraries for the most part. There for a reason, a purpose for being there which in one case is to acquire words and knowledge and in the other, plants and knowledge.
And Jessie picked out some plants and August did not care at all when he lost sight of her. He's been going through a little thing where he wants to know where his mama or his daddy is all the time. But today that didn't seem to matter and when I'd say, "Let's go find Mama," he'd look up as if to say, "Oh! Yeah! Mama! Eh, she's around here somewhere."
Honestly he reminds me so much of Jessie when she was a little one. She, too, was little and very blond and tanned and she just went everywhere with me, usually in a sling across my hip. She viewed the world from my side and stayed small enough long enough for us to go through life like that for quite awhile.
Just goes to show that the size a child is when they're young doesn't necessarily indicate the size they'll be when they grow up. I think of putting my six-foot tall daughter in a sling and trying to carry her now and laugh and laugh.
I guess I'm saying not to worry about the growth charts too much.

After I dropped them off at home, I went to Publix and bought things for tomorrow. The kids are coming out for brunch and Lily suggested we have breakfast burritos and that sounds perfect to me. I bought four kinds of tortillas, avocados, beans, salsa, turkey sausage, sour cream, crema Mexicana, and I don't even know what all. I have bacon and onions and peppers and cilantro and tomatoes and a Costco block of cheese. And eggs, of course.
We shall make do.

Have you seen this? 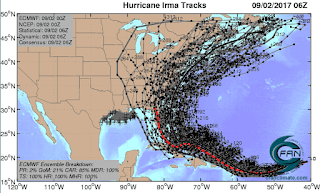 That's some of the computer models for the path which Hurricane Irma might take in the next week. This is one monster bitch of a storm, already a category 3. This may be where a little of my anxiety is coming from. I've lived in Florida long enough that I swear my body can detect the presence of a possible hurricane threat from days away.

Well. One can only try to be prepared for whatever may come.
And having said that, who could have predicted what would come for Houston and that part of Texas?

The names FSU and Alabama are getting thrown around here like there's some giant football game happening tonight so I guess that Mr. Moon and I won't be sitting on the couch and holding hands, watching Call The Midwife as we have been doing lately after supper, me trying to snort-sniff my tears back in, he getting a little misty-eyed himself.

That's all right. I have a book to read and a bed to read it in.

And tomorrow there will be a fiestita right here in Lloyd.

Life is made up of so many things and I suppose it's best to try and concentrate on that which is most directly before us and not to go fishing for worries which may or may not prove to be worth getting worked up about. Trouble rarely comes from the direction we're expecting it to.

There. Wasn't that helpful?
I try, y'all. I really do.