A Most Successful Celebration 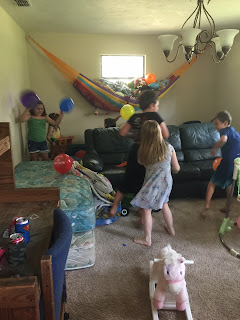 For some reason, there were an awful lot of children at this party today. I don't know how many. Hundreds, perhaps. But I have to say that despite some outbreaks of joyous kid play, they were incredibly well-behaved and not even overwhelmingly loud.
Owen seemed to have an excellent time. His best friend Chase was there along with a little girl who has been in love with Owen for at least a year. She came to his birthday party last year.
"She's certainly faithful in her affections," I told her mother.
She sighed.
"Did she make him another love card this year?" I asked.
"Yes. But I told her she could only put one heart on it."
She is smitten by our boy. There was another girl there who may or may not be Owen's official girlfriend. I can't keep these things straight. He just told me a few days ago that he didn't have a girlfriend but he may have been protecting his tender feelings.

The food was terrific. Much salad was eaten and although there were no steaks, there was plenty of chicken. It was delicious. The cake was excellent. Lily made it last night when she got off work at 11:00. Six layers of chocolate with a butter cream frosting. 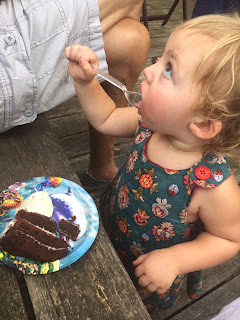 Here's Maggie eating three layers of cake and some vanilla ice cream before she gave up the utensil concept and just went at it with her hands. 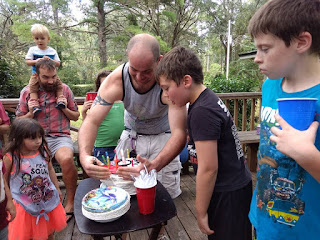 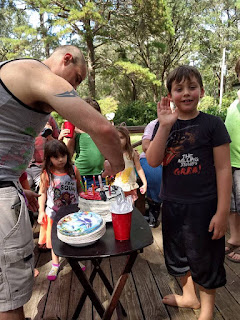 The ceremonial lighting of the candles. August got really excited about this. He loves the happy birthday song better than any other. He sang it for quite awhile after everyone else quit. 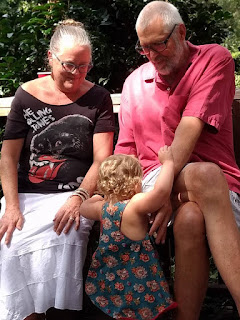 You may note that Owen and I wore matching shirts. (Thanks, Steve!) Maggie spent a lot of time on Boppy's lap. And some time on Mer's lap too. She's a lap baby. 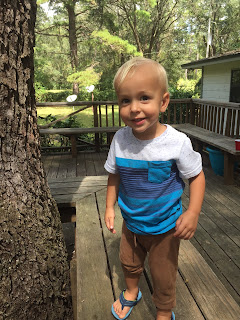 August sneaking around the big oak on the deck. 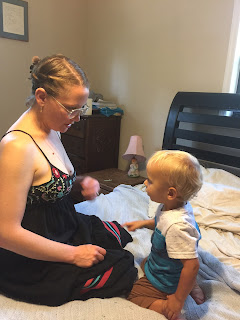 And here he is having a discussion on nursies with his Aunt May. He was curious about whether or not she has milk in hers.
Then he wanted to go and sit on Mama's lap and discuss nursies too. 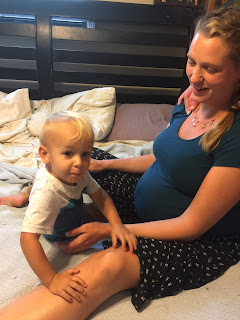 He is not nursing anymore but he obviously remembers.
I will never forget when Lily was about two and asked our well-endowed friend Anne if she was SURE there was no milk in those nursies.
Maggie is still nursing and when she wants to nurse she does not ask for them by name although she is very verbal and I'm sure she has the words. Instead, she makes a funny old-man throat-clearing sound which is impossible to mistake for anything else. I have never seen a child do this but Magnolia June is her very own woman who has her very own ways.

So. How did Owen like his record player?
Well, before he opened the records and the record player, he opened what Hank brought him which was a typewriter. A real, honest-to-god typewriter in a case which coincidently is the exact same model and color as the one I took to college. He was thrilled with it.
And when he opened up the records he was a bit mystified.
"But I don't have a record player!" he said.
And then I gave him the other present and he ripped it open and he seemed thrilled. 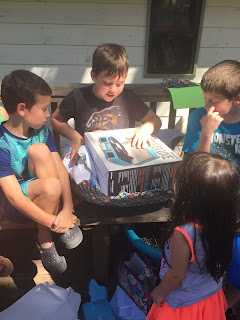 Before I knew it, he had it out of the box, plugged in, and had Let It Bleed on the turntable.
Someone asked him what his favorite presents were.
"Hank's typewriter and Mer's record player," he said.
A toy is a toy but a real thing is a real thing and Owen knows the difference.

And so it was a good party and I did enjoy it and Billy and Shayla and Waylon were there so I got to see them (they both have birthdays this week too, as do Lily, Vergil, and August) and there was not one medical crisis although I think someone did need a bandaid.

Mr. Moon's back is tender but I think he's going to be all right. It probably did not help him to be bending over and picking up grandchildren but hey! When your grandchild wants to be picked up, you pick up your grandchild.

When we got home, I somehow got talked into doing something I never in my life would have thought I'd do. I mean, NEVER!
And yet...I made six curtain panels from camo fabric for a deer blind.
I am not even fucking kidding you.
My love obviously knows no bounds.
For some reason, I really like this guy I'm married to.
Which is a very good thing.
Plus, he made me a martini so I guess we're even.

I raise my glass to us all.