It's Really Not Funny But Let's Laugh While We Still Can

Well, for whatever reason I have reached a place of absurd acceptance in the hurricane preparedness mind-mode.
I say that but this could change at any second.
I mean, my stomach is still constantly feeling like I might puke but my mind is pretty okay.
Except when I think about the two strange things I saw today. One was two juvenile raccoons, trundling right down Old Lloyd Road which is a pretty heavily traveled road, as if they had a destination involved. Raccoons do not generally do walk-abouts during the day and I have NEVER seen a coon just walking down a paved road. Ever. They were about as cute a sight as you can possibly imagine but still...it just didn't feel right.
The other was a doe who was just standing on the shoulder of another fairly busy road, looking confused and disoriented. She had not been hit, she was just standing there.
Again- unusual.

But, you know, probably nothing but a strange coincidence.

Or, if you prefer the more traditional "cone of uncertainty" there is this one. 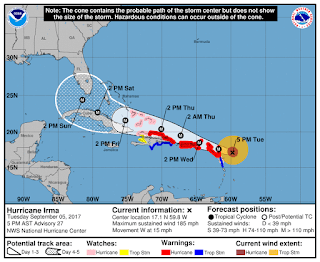 Bottom line is, we still don't know shit about where that storm is going to go. But. The fact of the matter is, it's already a catagory five storm and is, at this time, the 5th biggest Atlantic storm recorded in history.
And they get bigger and they get stronger over the Gulf.
And before this thing blows itself out, some people are going to go through hell. There is no way around that. And a lot of them are going to be the people who live in some of the poorest places in the world.

This is a serious thing and people were lined up to get gas and water at Costco, and Publix was out of water and ice. There was not ONE cart in the cart area of Costco and I have never seen that before. Floridians are taking this seriously and at least in this family, discussions about evacuations are taking place. May and I were just talking and she and Michael have even made plans to take their cat if they evacuate and I, of course, haven't even thought about that. But then I said, "Hey! Jack spent twenty-eight days in a bedroom and he was FINE!" and I started laughing in that weird sort of wacko-crazy way and then May joined in and well, we've just got to laugh. 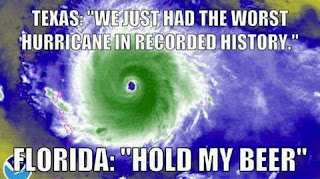 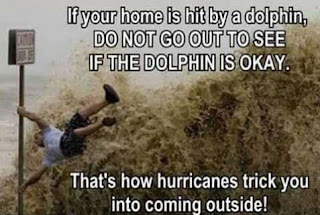 It's not really funny at all, none of it is, but here we are and we're doing all we can do to get ready and laughing does really help with that puke feeling in the belly.
What? Me worry?
Hahahahahahahahahaha!

Throw in the fact that the west coast is on fire and Trump's termination of DACA which is the most cruel and inhumane and STUPID thing possible the fucking racist could have done and I just want to hook myself up to a canister of laughing gas and let the good times roll!
Don't bogart that joint, my friend! And pass that bottle over here!

I stopped by Lily's house on my way home to deliver a few treats for the kids including a Costco-sized allotment of Cinnamon Toast Crunch. Gibson saw that and shouted, "YOU ARE AMAZING!" and my day was worth it. Owen was pretty happy about that too. And Maggie? Well, she was just happy to see me because that's our Maggie. 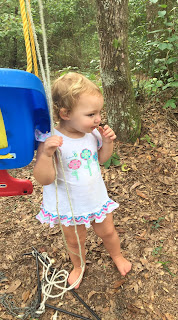 And...continuing in the theme of this morning's poem about Keith Richards (and I am so sorry that it formatted so insanely for some of you) I add this picture which I found on the Facebook today. 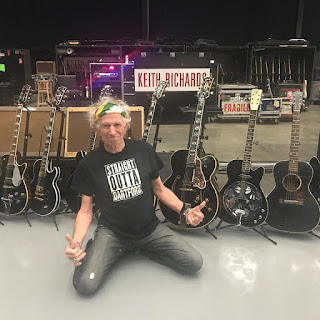 If Billy Collins was correct, we are still okay, us Planet Earthlings, because Keith and the Stones are about to kick off a fall European tour in Hamburg in four days. I feel quite sure that Muddy Waters will be mentioned.
And Keith looks good, doesn't he?
Well, I think so. I think he looks SPLENDID!
I hope he could get up off the floor. I'm frankly quite impressed he got down there to begin with.

Mr. Moon's out back, trying to fit the old convertible (or the Honeymoon Car, as Owen calls it) back into the garage. He pulled it out recently to work on a deer blind or something. Hurricane preparation takes many forms.
And please, don't worry. I think I have an adequate amount of vodka and pickled okra.
Priorities, people. Priorities.