The Subject Of Power And Luck 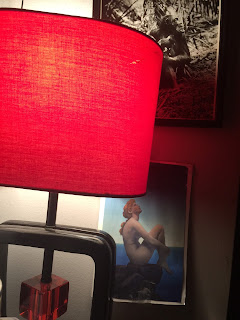 We were just snuggled into bed last night being grateful that it was cool enough to sleep comfortably when suddenly, my bedside fan came on.
A miracle! Electricity!
I was ready to take it for what it was and go on to sleep but Mr. Moon got up and unplugged the generator from everything, plugged everything back into the house current, took the snaking power cords we'd been living with and tripping over back out to the garage, and even set up the coffee for this morning's brewing.
That man. He just takes care of business.
Meanwhile, it felt like a struggle for me to plug my phone in.

I don't know what's wrong with me.

Instead of being simply grateful for what we have, what we avoided, I am on the verge of tears every moment. I look at the branches I need to pick up and instead of just being silly with glee that all I have to deal with are branches instead of a damn tree in my house, I am overwhelmed. I see all of the tracked-in dirt everywhere in the house and sort of want to die while at the same time, feel incredibly guilty that I feel this way when so, so many people have lost everything to flooding and are having to rip their houses apart to dry and repair them. I open my cold refrigerator and upon seeing that still vast vat of soup, wonder why in the world I made so fucking much of it. I put another load of laundry in and yes, I am so aware of the fact that I CAN DO MY LAUNDRY inside of my own house but also overcome with the knowledge that laundry is never done and also that almost no one else in Jefferson County is able to do their laundry today and according to reports, may not have that ability until next week. Hell, I'm sitting here writing this soul-dredge on my charged-up laptop and have wifi!
My children, my grandchildren, my chickens, my cats- all fine! I didn't lose so much as a carton of ice cream. Hell, we had so much food that my chickens are feasting on the remains of this leftover and that one. So far they've had watermelon, cornbread, field peas, and salad.
And one giant cockroach that I discovered in my dishwasher when I went to start putting dishes in it. Miss Dottie snatched that beast right up, swallowing it down her craw as she ran being pursued by the other jealous hens.

I guess this is just the way of it when depression and anxiety ride your back like an immortal monkey who holds on with a grip that never loosens. He whispers in your ear things like, "Yeah, this time you made it. This time it was all okay. But what about next time? These storms are just going to get bigger and more frequent. And why are you so lucky? You don't deserve this. You don't deserve electricity or running water or food or the health of your family or your husband or any damn thing in this world more than anyone else. The shit will come down on you eventually. Just wait and see. Just wait...and see."

And this is simply how it is.

And so, you download a new book on your phone (another undeserved perk of the universe from being born in a first-world country) and plug in your earbuds and you do the laundry and you clean things up and you go outside and you pick up branches and haul them to the burn pile and you stop to take the cloth from your pocket and wipe your brow and fold it back and put it back into your pocket and suddenly you feel as if you are channeling your grandfather whom you saw do that exact same thing a hundred times at least as he worked in the yard, slowly and steadily, throughout your young childhood, often after a hurricane or storm had wreaked havoc on his trees. You do what needs to be done and you are always grateful and you are constantly yelling at the monkey that no, you may not deserve any of your blessings and the shit may indeed come but this is just life and goddamn it, shut up.

Having said all of this, I remember an incident which I'm sure I've talked about before and it was the straw that truly broke this camel's back when it came to my relationship with my mother and is so very illustrative of why I probably have these feelings because I feel certain that the same message was given to me my entire life.
It involved money, of course, and this money had come from a trust that my brother and I received upon the death of a great aunt on my father's side of the family. We had known this money was coming and C., before he and my mother divorced, had talked my brother and I into giving my mother (and thus, him) a share of what we were to receive. Long story short, Mother did not end up getting the amount of money she thought she deserved and she was angry. We were talking on the phone and she said, "You did NOTHING to deserve this money. I was the one who had to put up with that family and your drunken father!"
"But Mom," I said. "That's what an inheritance is. It is based simply on blood."
"Well," she said, "I still don't think you deserve it."
And then I said, "I didn't deserve to be sexually abused either, but that sure happened."
And she hung up the phone and that...was...that.
Things were never the same again. Or perhaps, they were, just more so.

And now I'm going to go get my life better back in order and I have to remember that my mother did work hard and saved hard and was always thrifty and that somehow, money meant love to her in some way because she had had to do without much of it for some frightening parts of her life.

And I am a lucky woman and I do indeed have power.