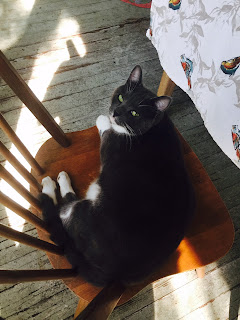 That's Jack the cat who is so fat he fills up the entire chair seat.
That cat.
Maurice still tries to whip his ass. She weighs about as much as Jack's ears. Maybe a paw.
It never comes out well for Maurice.
It's funny that my roosters get along better than my cats.
Maurice was born to be an only cat. I don't know why Jack sticks around. I guess because we feed him enough that he's grown to obviously over-large proportions. He'll eat and eat and eat and then throw up and then go eat some more. Maurice looks at him with huge and disgusted disdain from her perch on the kitchen island as he goes about his eating disorderly conduct. But that's how she looks at everything. One night after our guests left she came and slept with me the entire night. Every time I tried to move she'd make that warning growl in her throat. She just wasn't given enough love as a child. And I can't help it. I love her tremendously. I love Jack too but Maurice is my very own familiar.

After the shower yesterday I went to two drugstores and a (shudder) Walmart to try and find a new fan. Neither of the drugstores had any fans and the ones that Walmart had were too big. So I ordered one off of Amazon this morning.
Desperate times call for desperate measures.
The first review of the fan I ordered was this:

I'm quite a large man, my temperature's hotMy blood boils and churns like a cast iron potThe last fan I had, made hardly a breezeAs sweat pools collected and I smelled like wet cheeseIt made lots of noise and drowned out all soundWhile meanwhile a sweat pool dripped onto the groundI could no longer take it, my face was on fire!I felt like a bonfire that was fed with a tireSo I looked up this fan, It had good reviewsAnd it could ship quickly (really good news)It came in the mail and I plugged it right inAnd felt the cool breeze make its way to my skinI was cool! I was comfy! My attitude shiftedI felt like a schoolbus or house could be liftedSo if you are warm, or got forbid hotPLEASE BUY THIS FAN, it's the best one I've got."

How could I not buy it?

Walmart had rows and rows of empty shelves. I think it's mostly a matter of trucks not being able to make deliveries but it was weird. Mr. Moon went to return a small part he'd bought at Lowe's and he said the line would have taken three hours to get to the front of. People were returning plywood and generators and chain saws. I can understand that people would want to return them if they really couldn't afford them but honestly folks- you're just going to have to go through that whole pain in the ass of going back to the store and re-buying these things when the next storm comes. And it will. 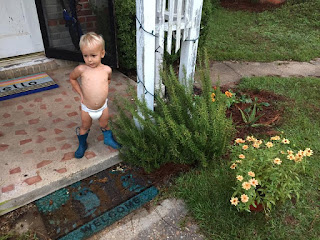 That picture cracks me up. He's standing just like his daddy does.
And since Jessie posted a bunch of really cute pictures this morning on FB, I might as well share this one. 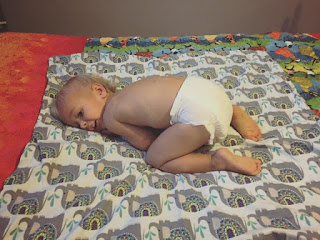 He approves of his brother's new blanket. Jessie said that when she showed it to him, he laid down on it and said, "Cuddle. Nice."
Don't you just want to scratch that little back so softly?

All right. I better get out there and pick up some sticks.

I know. I KNOW! I lead such a glamorous life. It's insane. Try not to be jealous.