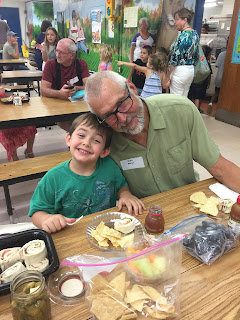 Well, that's what the scene looked like in the cafeteria today when we ate with Gibson. I bet that we were the only people there who had a jar of homemade pickled okra. Or...okra of any kind for that matter. Gibson was thrilled for us to be there and hugged us both about ten times apiece. Or maybe more. He would eat a few bites and then, as if overcome with it all, he'd hug one of us again. He's such a lovey boy.
Boppy had to go back to work after Gibson's lunch so I stayed to eat with Owen and that was fun too. He was the door holder today. 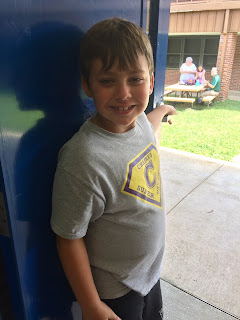 I swear- that kid has grown at least another inch every time I see him. We discussed the fact that usually he has three grandparents at lunch on this special day but today it was only me. I think he was okay with that.
The thing I like the most about grandparent's lunch day is seeing all of the other grands with their grandbabies and also, talking to the other kids at the table. As Owen and I noted, grandparents come in all shapes and sizes and ages and colors and we all love our grandchildren. It's just palpable. One little girl who ate with us when we were sitting with Gibson broke my heart though. She sort of played with her food and didn't eat a thing and finally I said, "Aren't you going to eat anything?"
Another little boy said, "She never eats."
And then she said to me, "No. It's my meds. I need them to focus but I can't eat."

Yeah, speed'll do that to you, as I recall.

What the hell are we doing to our kids? Is medication really the best way to help children focus?
I don't know. If so, we need to figure out why the hell so many of them need that help although I'm quite certain that the pharmaceutical industry likes things just the way there are.
She did finally accept a little bit of cantaloupe that I offered her although I know I should not have been offering food to other kids. Still- it made me feel good to see her eat that little bit. Honestly, she did not eat one other thing nor did she take a sip of her chocolate milk.
She seemed wistful, that little girl, and so sweet.

After the lunches, I came home and not long after I'd been here, the AC man showed up. Oh, how I could have covered him in kisses! Okay. Not really. But metaphorically, at least.
We laughed about this air conditioner in a most rueful way and shook our heads even as we laughed. He's worked on it before.
He found a burnt wire that had gone through the capacitor and knocked it out and he rewired the wire and replaced the capacitor and blessed cold air is coming in through my vents again.
I gave him a big glass of ice water and he went on his way and although I had thought to go out and work in the front yard some more, I changed my mind and took the wimpy way out and sat down and made something for Jessie's shower which is tomorrow. I can't tell you what it is because she might read this.
Hint: It doesn't look that good but it's very soft.
Haha!
But oh, how I enjoyed myself, sitting and sewing. Truly, that has become one of my favorite activities.
And...it helps me focus.

So that's been my day and if it hadn't turned out the way it has with the AC fixed, I would be a weeping pile of sweaty misery. But, we shall sleep cool again tonight and tomorrow is Jessie's baby shower and that will be sweetness. Her Aint Liz (not to be confused with her fairy godmother Lis) is throwing the party and I'll be going over early to help her. Costco food is going to be in evidence. I will do my cooking after this baby is born. The chicken soup, the traditional postpartum salad and bread and prune cake.
It won't be too long now.
Her baby is growing so fast and she is so beautiful. She is absolutely regal and majestic and that's all there is to it. I cannot wait to meet this new little fellow she's carrying so splendidly.

Ah, it is raining and I can't believe I'm saying this but that's so nice.

May all be well with you and yours.