Do Not Fuck With My Sleep.

Last night the power went out right around midnight. I laid there in the deep darkness in my incredibly comfortable bed and I just could not sleep. Even though the fan I was using wasn't worth a damn at moving any air, it had at least made a somewhat soothing (although insufficiently loud) sound and I do admit that I depend on that noise to soothe me into sleep. Every time I did drift off, my husband would turn over and that would pull me back into full consciousness or else an Amber Alert would override the settings on our phones and tell us once again to watch out for a certain vehicle because maybe, you never know, that sucker could just drive right into our bedroom.
After awhile I just got pissed. I wanted my fan back on, I wanted my air conditioner back on. And I wanted them THEN! I just could not find my lotus flower (as Lis would say) about the whole situation. And I knew I was being silly. Earlier in the evening it had rained harder than it rained during our entire little Irma experience and frankly, I was surprised that the power hadn't gone out sooner. Still, I was pissed. I was pissed at Duke Energy for not getting it back on immediately, I was pissed at Jefferson County for having so many damn trees. I was pissed at my husband because he appeared to be sleeping, albeit restlessly.
And of course I was pissed at myself for being pissed.
I finally did get to sleep and had one of the most detailed dreams I'd ever had. I won't bore you with all of those details but I will tell you that I dreamed that Mr. Moon was gone and that I'd been asleep and someone came and stole everything in our house, including (and I am not making this up) the kitchen sink. AND the bathroom sinks. Everything.
Of course babies were involved and I could not for the life of me get 911 to respond and finally, when someone did show up in a patrol car, it was just some random guy who drank all our beer and admitted that he wasn't a police officer, he just liked the "really hot car."
And oh, it went on. And on. And on.
When I woke up I knew I had to GET up so that the dream would leave me and so I stumbled in the pitch black to the bathroom and stumbled back to bed and finally, at around four a.m. my useless fan came back on and I was happy.

I got through all of that pissed-offedness and checked the post office (no fan) and drove to Target just praying that they had a portable record playing device and they did and I almost cried. 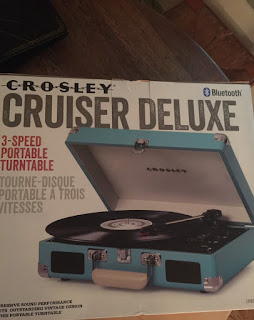 I surely hope that boy likes it. I'm going to give him a few albums from my vast collection, too. Maybe one Beatles and one Rolling Stone and who knows? Maybe one Bach.
I walked around Target and got birthday cards because everyone in the world has a birthday next week and toilet paper and then I thought, fuck it. I'm buying a fan if they have one.
They had one.
I bought it.
When the one from Amazon gets here (if it does) I'll simply have a back-up fan. Ain't nothing wrong with that. 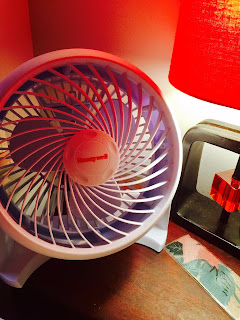 Oh! I am so happy!
It's absolutely amazing what fifteen dollars worth of plastic can do for your mood.

Mr. Moon is indeed in Georgia and I hope that no one comes and robs my house tonight (Warning! I have a gun and I know how to use it!) (That's a lie.) (No, really!) (Not really.)
Okay, okay. I have a Rottweiler. And fourteen bulldogs who wear spiked collars.
Who are armed.
But if they do, I hope I sleep through it with my lovely fan blowing on me and making a sweet, sweet sound that drowns out the sound of everything else.

Speaking of sound, it's thundering again right now and I've gotten two more Amber Alerts about this green Toyota. If any of my kids ever go missing, I hope people pay attention to those things but dammit, I live in LLOYD! I'm not going to see that green Toyota. That's all there is to it. Especially not from my back porch.

Anyway, I've gotten some niggling little chores done today and my kitchen positively reeks of Fabuloso and vinegar which makes me so happy and when I open the cabinet under the kitchen sink (which hopefully no one steals tonight) I don't exactly want to die because I tidied it up and threw some stuff away and also? I got eight eggs today. Eight.
Here's a picture of Joe Cocker who has the most magnificent comb. 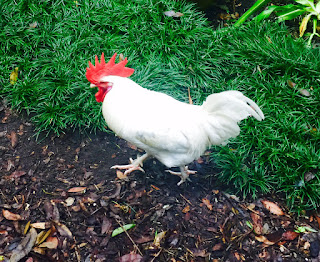 He is a very lovely rooster and I am proud of him for hanging in and working things out in a peaceful manner with Mick. And I am proud of Mick for not killing him when he was a youngster.
I wish they could be an example for a certain Kim and a certain Don whom I do not think have the maturity or ability to understand the consequences of foolish threats and posturing to themselves and the flock that these two roosters do.