A Soup Night In Which Meals Are Repurposed

So May loaned me a book to read called An Everlasting Meal: Cooking With Economy and Grace by Tamar Adler and I'm enjoying reading it. May said when she lent it to me that the whole concept of the book is what we pretty much always do anyway, which is to take what's left from one meal and turn it into another meal on subsequent days and so on. And this is true. I have always said that one of my greatest talents is taking leftovers and making more leftovers out of them. 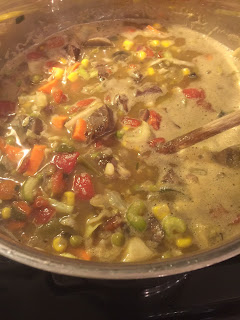 Tonight's version of an example of this talent of mine can be found in that soup pot. Soup, of course, is the easiest way to incorporate bits of this and that to be wedded together into something new. That started out as a venison roast I cooked with onions and garlic and potatoes and then added green beans and leftover zucchini and yellow squash which had been cooked with tomatoes to the broth of the roast. So, for at least one part of the soup, it is representing leftover leftovers already.
I did cook some lentils today to add to it, along with more garlic and and have also added some leftover quinoa, some cabbage, and some corn. Oh. And a few chopped baby sweet potatoes.
It will be a decent enough soup and I'll freeze a goodly amount to save for after Jessie's baby arrives.

So obviously I have felt better today and even went to town to run a few quick errands and then scooted home as fast as possible.

And that is what's going on in my incredibly boring life today. I will report that Maurice slept with me the entire time I was sick and did not scratch or bite me once but merely curled up either by my butt or my head. She did make that threatening noise every time I moved but that's just Maurice. She also kissed my face and lips on the first night of my illness as if she were trying to comfort me but we all know that's not possible.
Right?

Tomorrow August will be two! His party is on Saturday.
Can you believe that? That little sprite is going to be two years old?

I will get pictures to prove it.