In Which The Measure Of Trees Are Taken 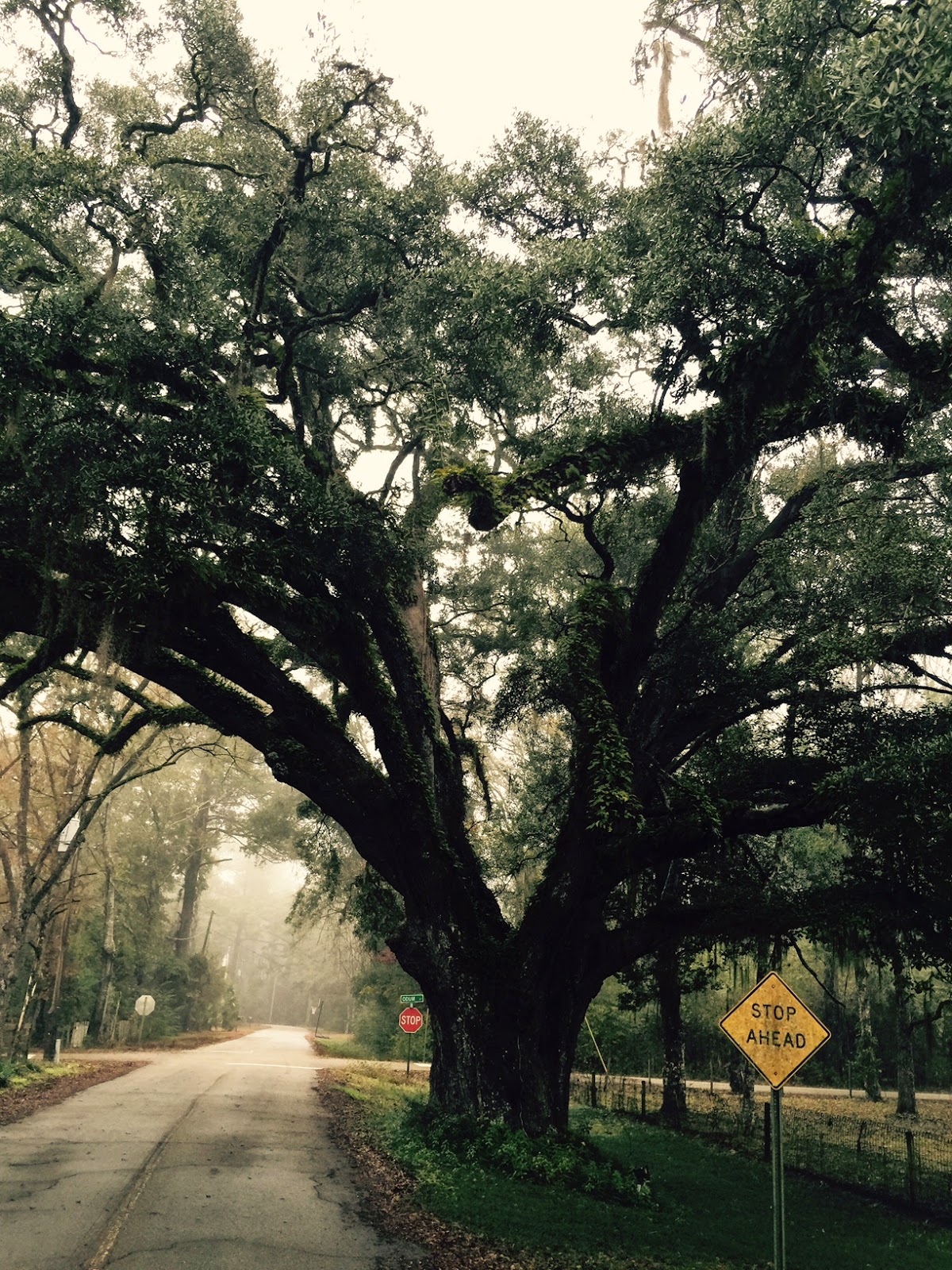 I'm almost afraid to say this but my anxiety has turned itself down a notch or two today. But here's the weird thing- my body is still holding all of the manifested physical symptoms and I hurt and I ache and I'm so tired.
The boys just left and actually, Owen spent most of the afternoon with his Boppy at a basketball game so I followed Gibson around but it wasn't very physical. We just drifted from chickens to goats to trees. Before he came though, I went out to just stretch my legs a little while we were getting a break from the rain. I noticed as I walked down the road in front of the house next door which is empty now, that some guys were measuring the incredibly beautiful and enormous live oak. 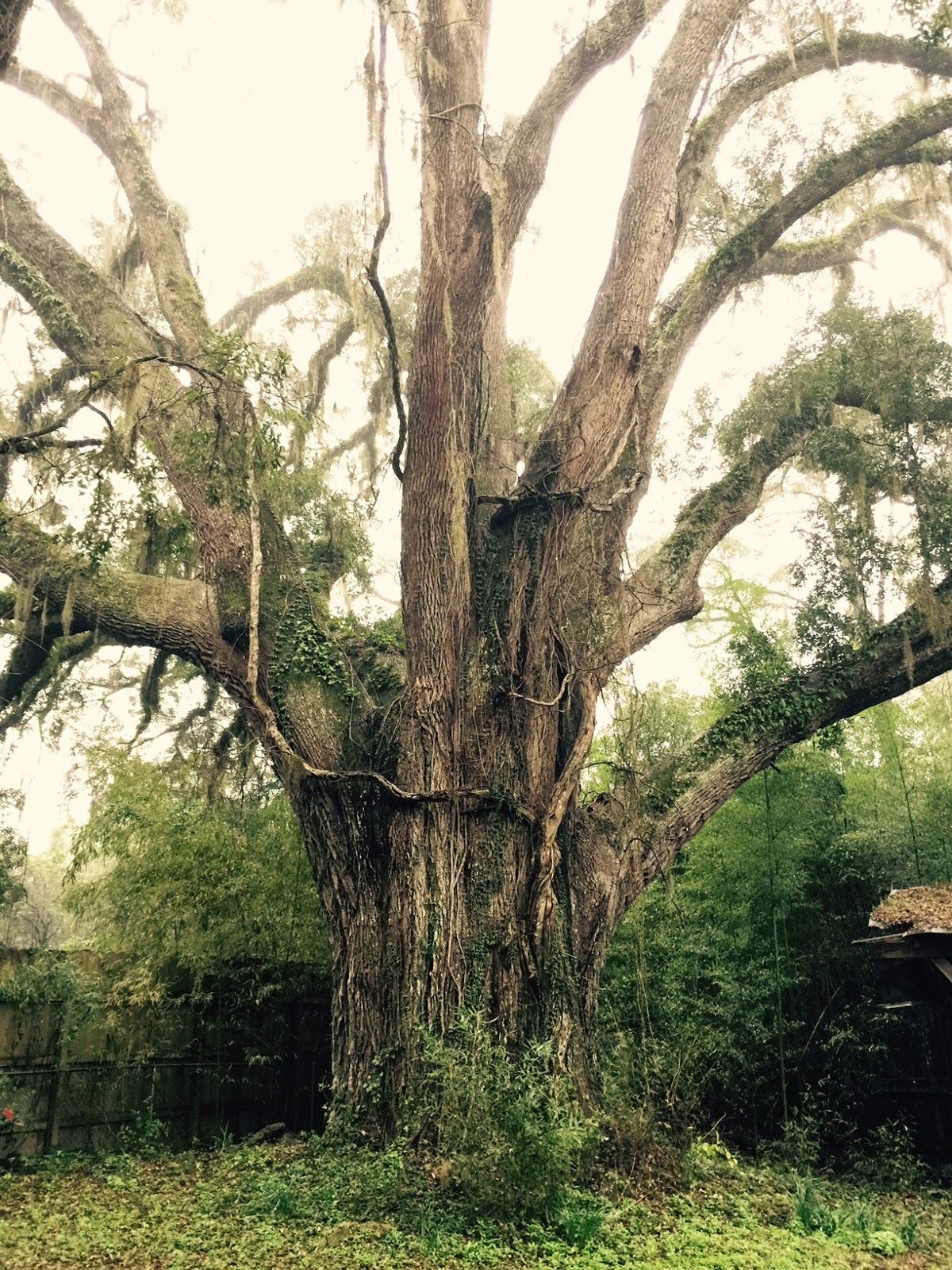 I stopped because that's what I do and introduced myself. There were three men, one of them from the Florida Forest Service, official and in a uniform and all of the men seemed very happy and cheerful and very excited to be measuring this huge oak. We all talked about it and admired it and then I said, "Well, I've got a tree next door y'all might want to see. I don't think it's as big as this one, but it's pretty big."
The men agreed they did indeed want to see it and one of the men's wives who was waiting in a car, came with us. We tromped through the wet, chilly day and I took them to my backyard and showed them my biggest oak. Well, it's actually on the railroad property and actually no one on this earth can truly be thought to own an oak but I am this one's most faithful witness and adorer. 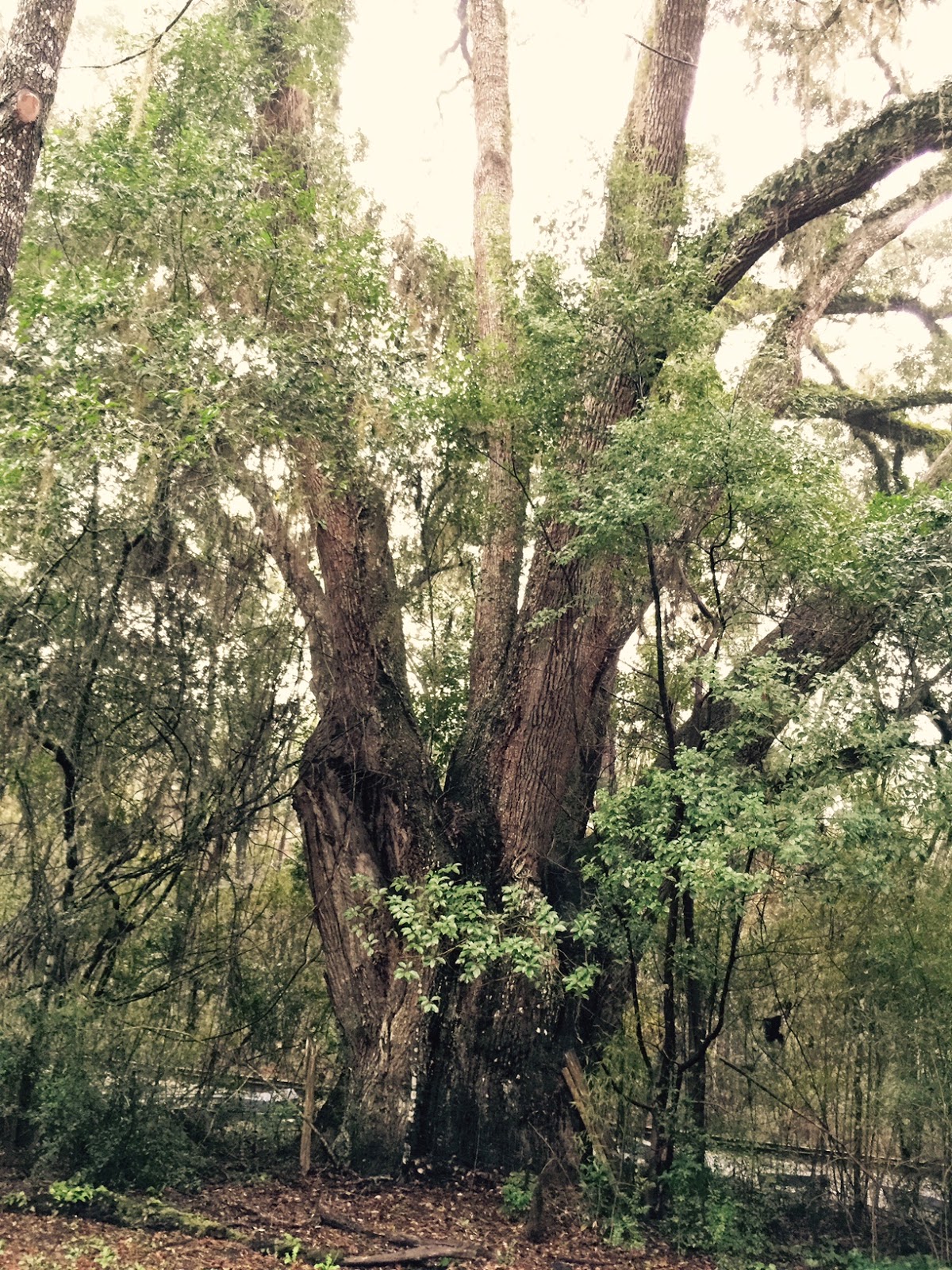 "That's big, all right!" one of them said.
"Let's put the tape on it!" said another.
Turns out it is twenty-nine feet, four inches in circumference which is four inches larger than the tree next door. I was surprised, truthfully.

It was a very nice thing for me to meet these cheerful people out measuring trees. They asked me questions about my yard and my house. The woman miffed me a bit when she said, "This must have once been a very stately house."
Once been?
Ah well.

Anyway, I went on down the road a little ways and it was all so very quiet and beautiful until thunder echoed across the sky in a great and continuous rumble and I turned around and came home. I took that picture of the oak at the top of the page on Main Street. I have posted its picture many times but I never grow weary of its beauty.

And I picked a camellia and brought it home and put it in a vase. 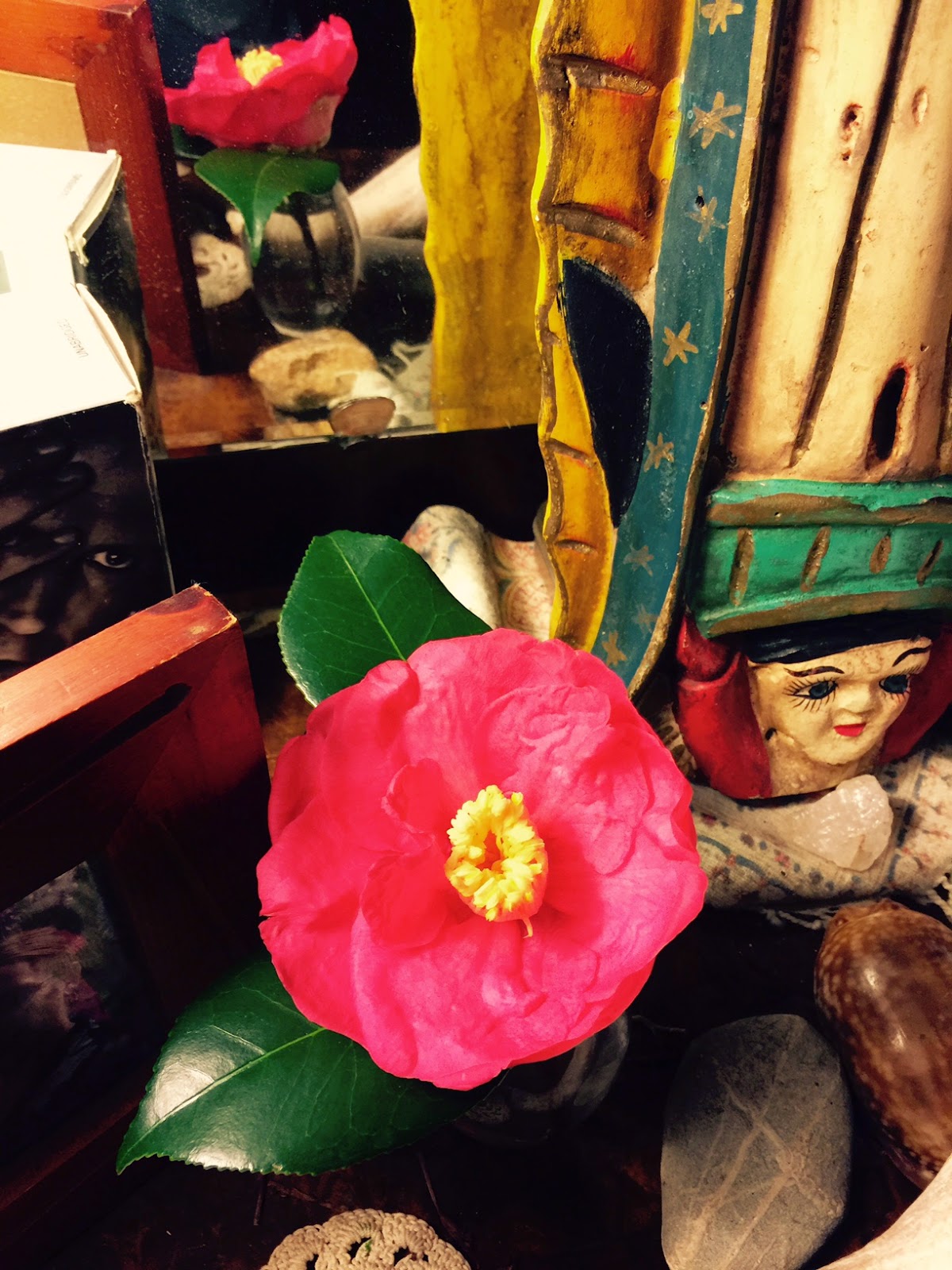 Finally they are beginning to bloom.

So that's been my day. Boys and trees.
Here's one of the boys. 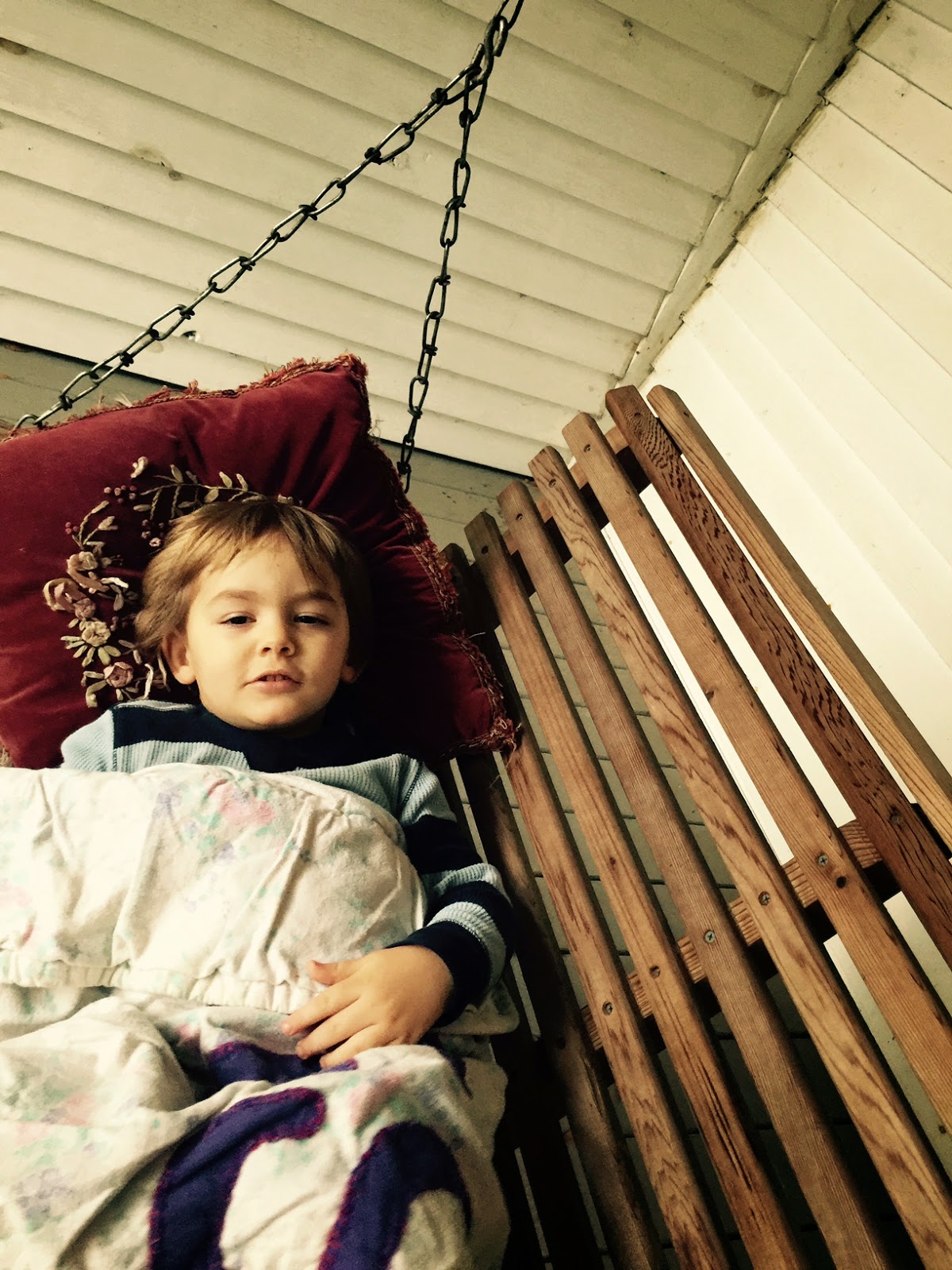 Gibson. He wanted me to swing him on the porch swing and so I did. He asked for a blanket and when I gave it to him, he snuggled down under it and said, "I like blankets." He sang me a startlingly great rendition of "Twinkle Twinkle, Little Star" and then he drowsed on the swing, looking out at the gray day, the dripping leaves, the traffic passing by until Boppy and Owen came home and then the games began.

I'm going to go make poached eggs for our supper. That's about all I feel up to tonight. And then I'll get in the bed and snuggle under the blankets.
Which I love too.

I have lots to do tomorrow but tonight I will rest and try not to worry about any of it.