Where Everybody Knows Your Name. And Grandchildren.

On Mr. Moon's and my anniversary I posted the same picture that I posted here on FB. It got something like 93 likes and lots and lots of lovely comments. Mr. Moon, who is new to FB, was skeptical that I actually knew who most of these people are. He started reading down the list and every name, I could tell him exactly who they were and how I know them, many of them from right here in blog world.
He was impressed.
I am amazed at how many relationships I have formed from this blog, many of them what I consider to be very true and real relationships, even if we never meet in the "real" world. And sometimes things get sent in the mail, the kind of mail that I pick up at the post office and that is always a joy. Today when the boys and I walked down there I found an envelope addressed to
Mary Moon
Lloyd, FL 32337

And it got right to me.
Thank you, Gail!
When I opened it up, I busted out right there in post office, laughing. I had Owen take a picture of me holding it. He did not ask what it said nor did I volunteer the information. If he had asked, I would have made something up.
Probably.
Anyway, here's the picture. It's sort of like a mug shot, isn't it? 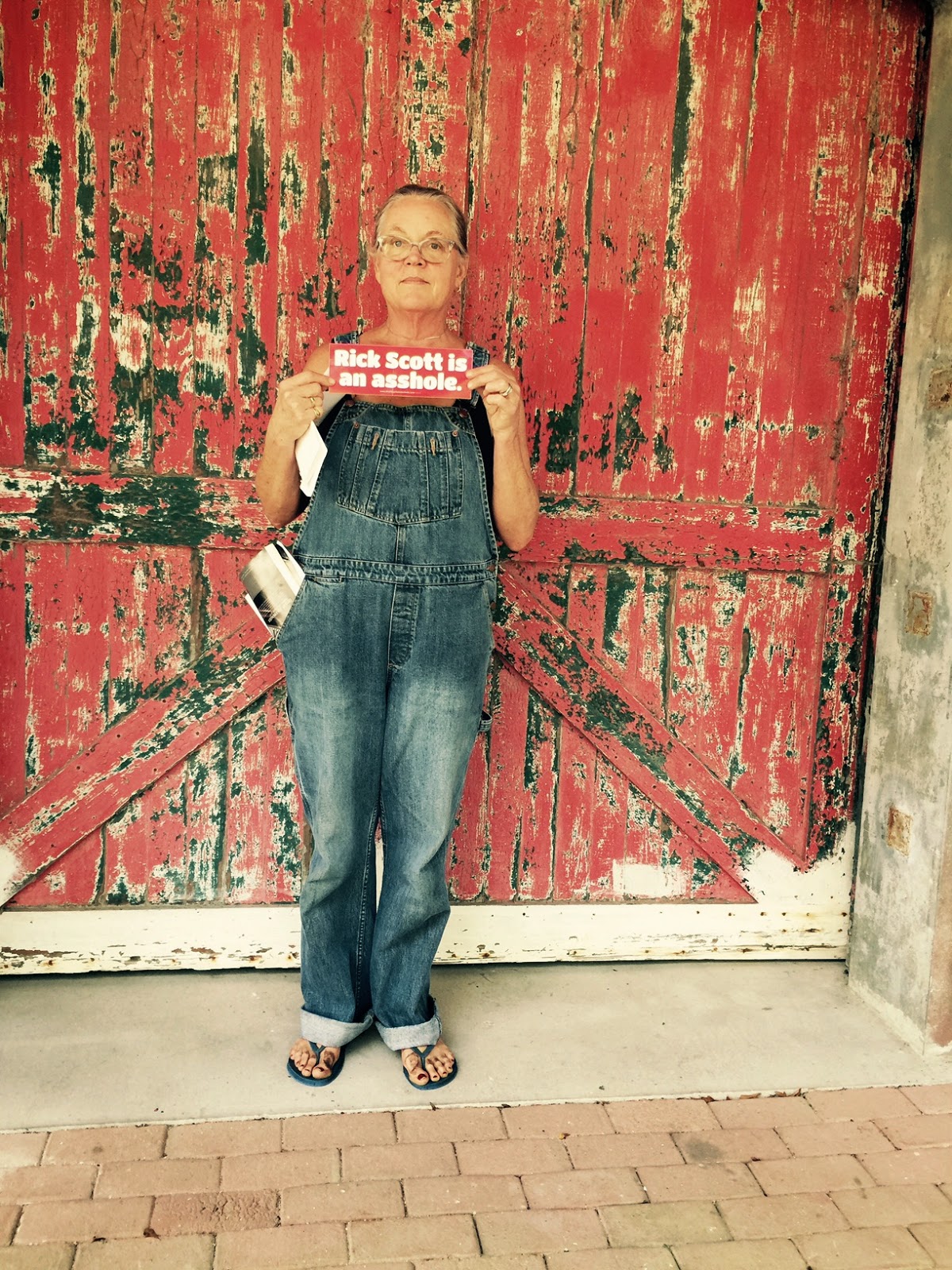 And yep, that's what I look like 99% of my waking hours. Check out the dirty feet. I did some yard work before the boys got here.

It turned out that Gibson has a good old fashioned cold. At least I'm pretty sure that's what it is. When he got here he just had a cough but then he started snot-sneezing. And he wasn't hungry but he wasn't unhappy or fussy either. Nor was he running a fever according to the MerMer hand thermometer. He was a little subdued but he seemed happy enough. We played and walked to the post office and walked home on the railroad tracks and did all sorts of fun things and suddenly, when we were playing outside, he said to me, "Mer, I take a nap."
I thought he wanted to lie down on the Chinaberry tree limb where he pretends to sleep and I asked him if that's what he meant.
"No," he said, "I take a nap on you bed."
"Okay," I said, and we all went inside and he laid down on my bed and I put Tarzan on and the little man fell asleep.

He slept for a little over an hour and when he woke up, he was running a fever. It's so funny how a kid can go through the stages of an illness just that quick. He smelled different. And he wanted me to hold him and so I did and he was like a very dense and crumpled leaf on my chest and I gave him a kid's Advil and within forty-five minutes he was cooler and didn't need me to hold him and then he actually ate a piece of pizza and dang, if Advil isn't a damn miracle drug, I don't know what is.

Here's what he looked like before the Advil really took hold. 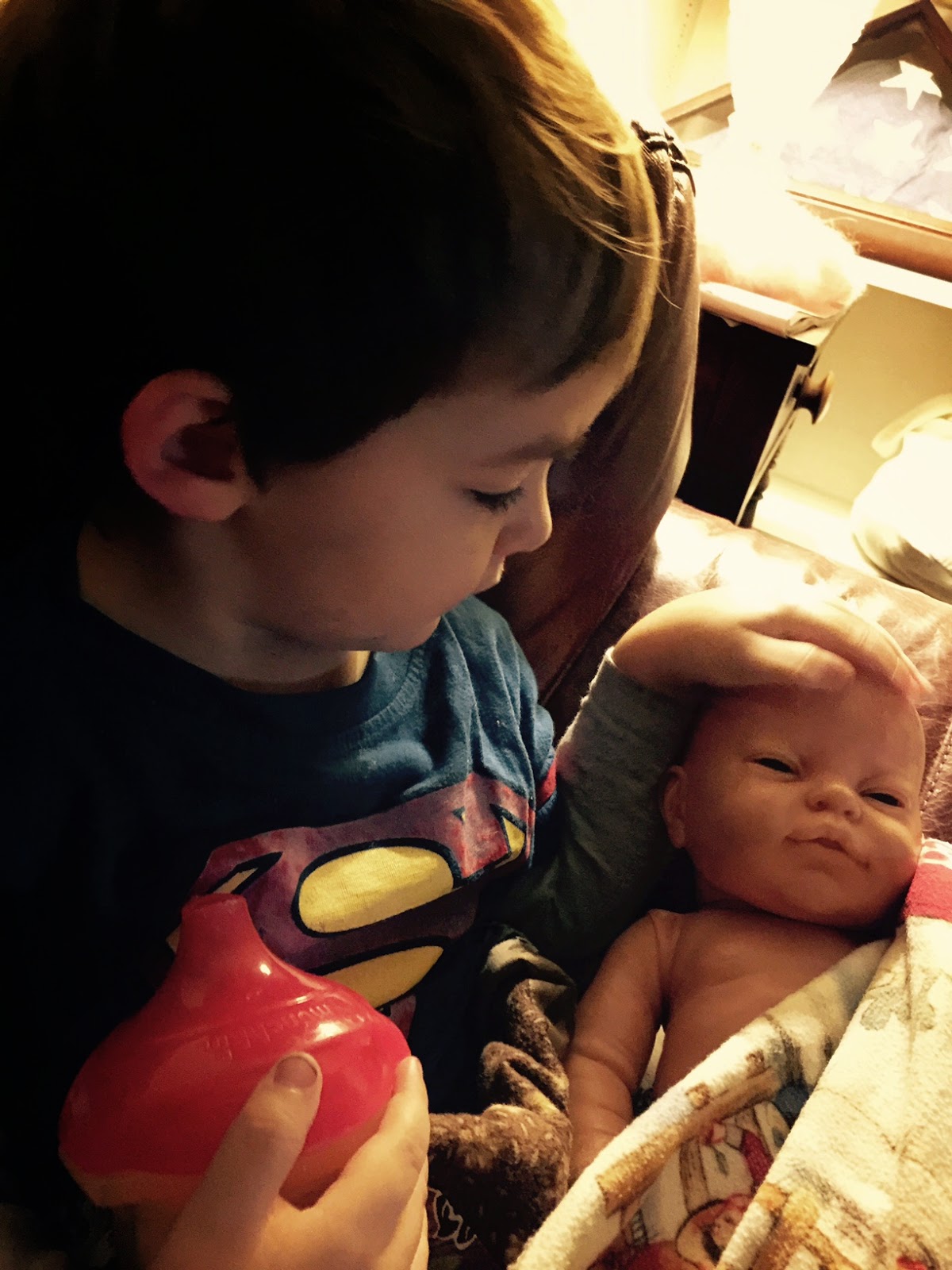 Here's another picture I took today and although you can't see a whole lot of detail, I love it. 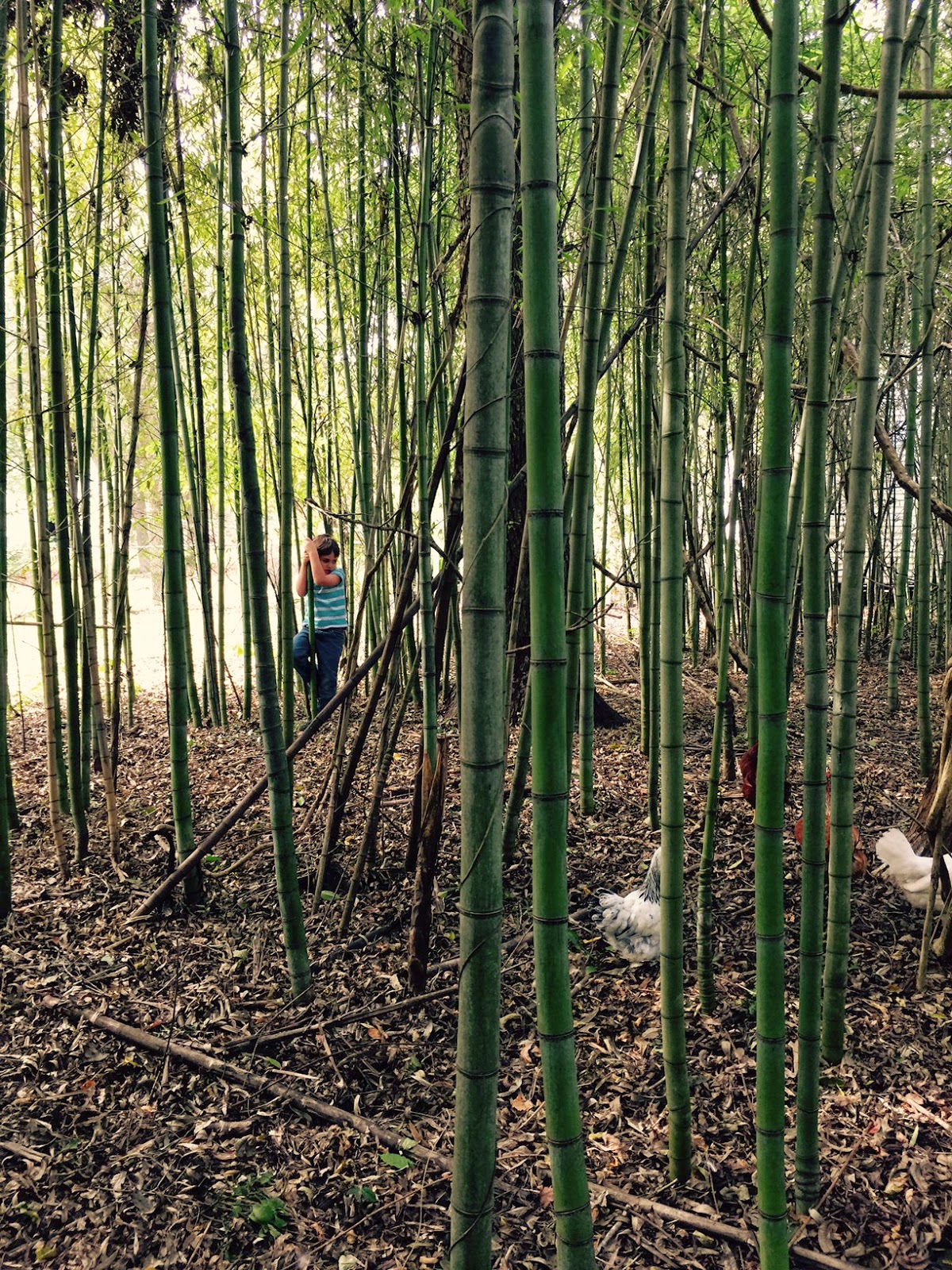 Owen climbing the bamboo with the chickens in the foreground. The light. The boy pretending to be Tarzan. The chickens scratching. Magic. To me, at least.

My precious darling cat Maurice killed another squirrel today and ate it from the top down to the guts and then went off to do something else for awhile. This was outside, by the way, but only a few steps from the back porch. While she was gone, Gibson and I got out the shovel and buried the rest of the poor little corpse. Neither boy seemed upset at all. Maurice was upset though when she came back to finish it off.
"Where'd it go?" she might as well have asked me. "Where the hell is my squirrel?"

I think she's still looking for it.
And tonight I just hope she doesn't vomit squirrel brains on my bed.

Too much nature. Or just enough, depending on your attitude, I suppose.

I feel so grateful tonight. And quiet. I've spoken to my husband who is not having good luck as to hunting but who is very happy to be in the woods. The full moon is messing with the deer's feeding but he got to see some lovely wild turkeys today. I got some of the deaded plants cut and trimmed and pulled from the yard this morning and a few branches picked up too. I have the entire weekend to finish all of that up. As if it ever were really finished. I know the moon is rising up full-bellied but it's too cloudy to see. It's going to be chilly again tomorrow. Down in the thirties again tomorrow night and one of the plants I cut and pulled today was my red passion-flower vine which never blooms until it's almost time for a freeze to nip it back and this year, the freeze happened before the bloom.

Again- I am not lonely at all. And a huge part of that is being able to write these words and send them out, knowing that someone will read them. Someone, maybe, who has never even been to Florida or at least not to my part of Florida. Someone who has grandchildren and knows exactly what I mean or someone who has maybe never had children at all but who can understand a little more what it's like, reading these words.

I feel very tender about all of this. You are part of it.
I can't thank you enough.