Slow, Not That Steady 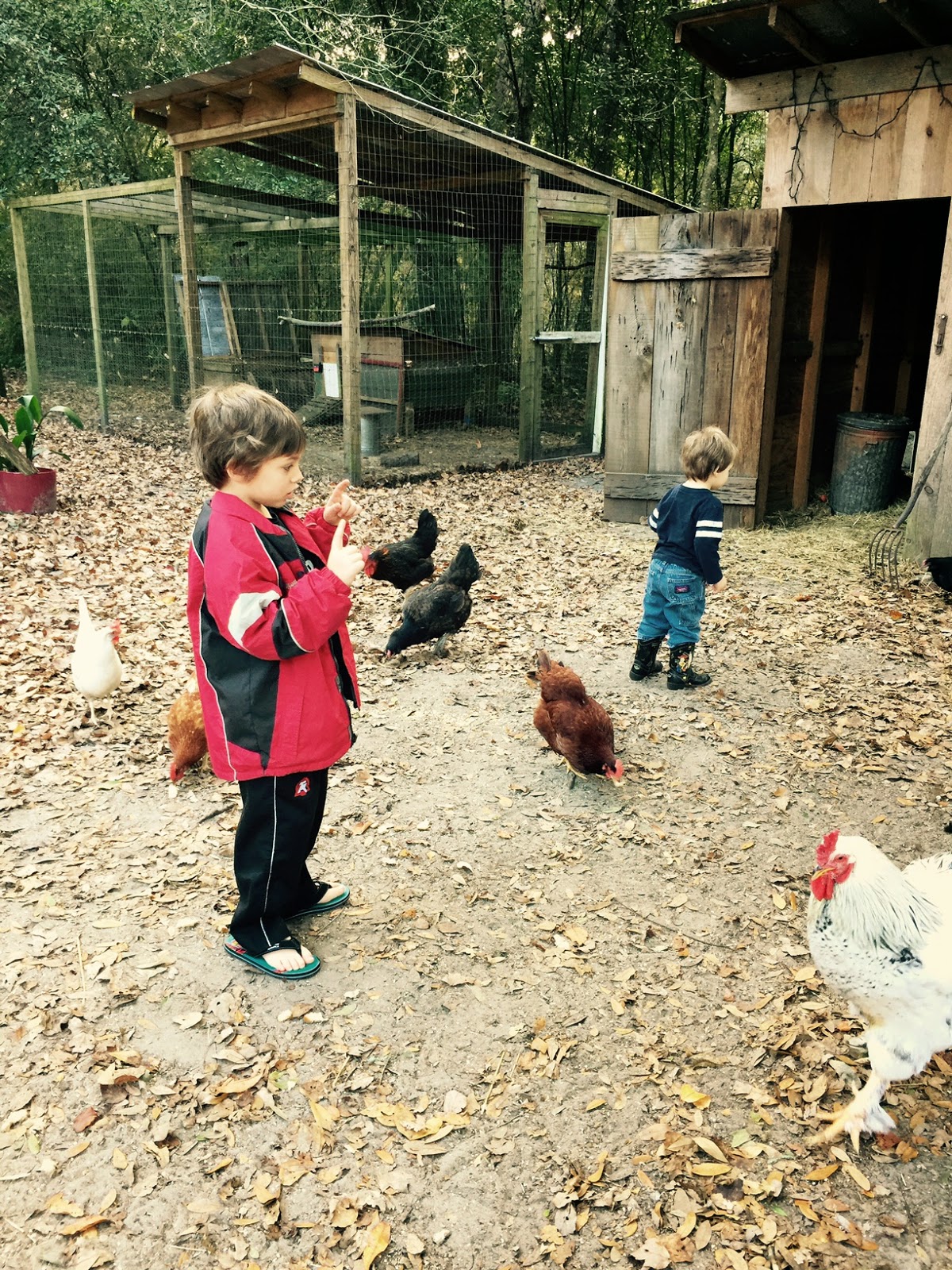 Since that picture was taken this morning, you can see that we all survived the night. Owen was counting the chickens and Gibson had been feeding them their corn and some bread. Owen can name all the young chicks and some of the old ones. Thirteen in all, so that's something. Mr. Moon sure can't. Sometimes I think about the fact that if I died, no one would know the chickens' names. How sad that would be.
"Is that Ozzie or Sharon?"
"I don't know. Let's ask Owen."
Of course the chickens would not care one bit as long as someone was feeding them.

I did not have a great night. I had heartburn. This is what I ate yesterday:
Curried squash and sweet potato soup for breakfast.
A cold pork chop for lunch.
Chex Mix.
Frozen pizza.
Did I deserve heartburn or what? Yes. I did.
About the time I got back to sleep, a train went by and Gibson woke up and grabbed me. I held him and snuggled him and he went back to sleep. Owen didn't stir as far as I know. I tucked him in bed and read him a book and then told him the Mr. Peep story. We got as far as Mr. Peep and then the goats and he was asleep. The curtains had fallen down over his bed and I was putting them back up after he fell asleep and he woke up enough to say, "But Mer, you didn't do the cats or the humans."
And then he fell back into dreamland.
This morning he asked me what animal he went to sleep on. I told him that I hadn't even gotten through the goats before he fell asleep. I told him about him waking up just enough to tell me that I hadn't done the cats and humans and he said, "That's a sweet story."
He cracks me up.

So. They're gone now but before they left we had pancakes and bacon and fed the chickens and let them out of the coop and played on the swing set and did other things. The house pretty much looks like it has been hurricane-pummeled. I need to get busy around here. When Mr. Moon left nine days ago, I had thought I'd finish weeding the garden and fertilizing it, do some work on my book, walk every day, get my diet together, etc.
But no.
He's going to get home tomorrow to be greeted by a woman whose face looks like she has some horrible disease, a yard where everything is frozen, dead, and brown, an unweeded garden barely making it, a wild kitten in the bathroom, and a messy, dusty house.

I better make him a good supper, right?

Kitten is still alive. Every time I go to check on her, she's laying in a nest made of formerly-clean washcloths on a shelf but as soon as she sees me, she leaps into the shower to huddle behind the curtain. This is going to take time and patience. Bless her scared little heart. I hope she can learn to trust and purr.

I suppose I better get busy around here. It's windy and chilly and working outside doesn't hold much appeal but I could do a little tidying and cleaning. And a nap is definitely on the agenda for today.