Well, He Is On HIs Way

I dropped Mr. Moon off at the airport and I only cried a little and as I was getting in the car I said, "Just remember how much I love you," but he was already texting and trying to deal with his bags and then he looked up and smiled and said, "I love you too."
On the way to the airport he said, "I really want to tell you how much I appreciate you letting me go do this. It's something I love so much and who knows how much longer I'll be able to do it?"
I didn't even want to go there. I want him to be able to hunt forever and ever and ever and all which that might imply but of course, if wishes were fishes...

Hank and I went to lunch at a Mediterranean restaurant and the food was delicious. A beautiful plate and the server was beautiful and described a dish as "smooshed fava beans" and we had a very good time talking and laughing. Each of my children are so very precious to me and are such amazing people. Of course I'm their mama but people tell me that all the time. And they are each and every one completely different. Like night and day and different planets but they are all filled with starshine and sunlight and they are my glory.

I went to the library and to Publix and look what I bought. 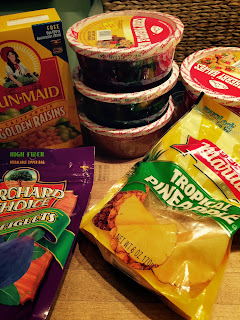 Other stuff, too, but that's most of the fruit that will go into fruitcakes. Why, why, why?
Because I can and I want to. I will bake them and wrap them up with rum-soaked cheesecloth and put them in tins and let them sit for awhile. I think I might make small ones and give them away. Who knows?

I came home and felt as if I was under a deadline and for what, I have no idea. I unloaded everything and put everything away and the house felt lonely, although not really so much. It is hard for this house to feel very lonely with so many spirits of the floor boards and walls and so many lights I can turn on and music, too, if I want. It is going to freeze here tomorrow night, maybe, and so I brought in all the smaller plants and now I am living in a jungle. 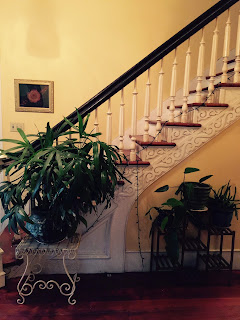 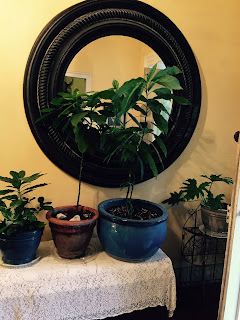 And that's just a few of them and not one of them is going to get the light it needs but I know they will survive and most of them would not if they were outside. My mudroom has an eight-foot long table on it which is also filled with plants. I wonder how many lizards I brought in. Luckily, I do not mind lizards at all and Maurice simply loves them.

I have a pot of daisy mums that survived from last year and it is in full bloom. I left it on the porch. 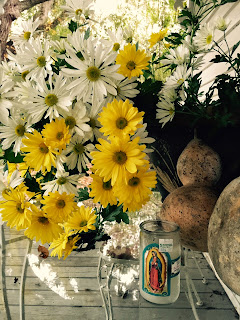 Tomorrow I will drag the huge ferns and the giant split leaf philodendron mother to the wall on the porch and cover them all up with sheets and blankets. It has been a good year for the hanging ferns. They are so happy and luxurious and I hate to think of the toll winter will have on them but there is really no room for them in the house. Some of them hang four feet from their pots and I'm not not even kidding you.

Another thing I did this afternoon was to dig out the old journal that Lon gave me for my birthday in 2001 which I never used until January 11 of 2013 when I pulled it out and started writing in it and drawing pictures in it, even coloring them 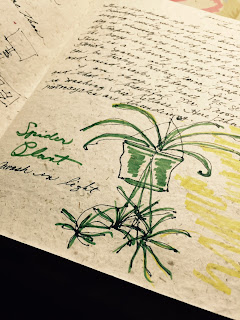 and I cannot draw for shit but on January 11 (yes, I am repeating myself) I started writing in it and on January the 14th, this is what I wrote and drew 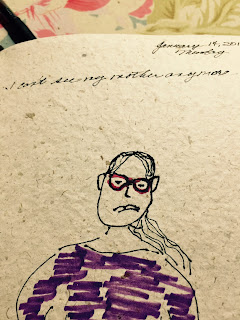 And I wrote and wrote and wrote in this journal about that. The story of her death and how horrible it was and I kept up with the writing for a little while longer and then put the journal away but today I got it out and wrote in it again. Hank and I talked today about writing, real writing, with pen and paper, the way we used to do all the time. So I went and found the journal and got out my beautiful red ink pen that I bought in Asheville, North Carolina, a true fountain pen, and the paper of this journal sucks and holds the ink which flows so beautifully from the nib.
Maybe I'll get out my colors, too. Who cares if I can't draw? It doesn't matter.
It is all a real thing which I can hold in my hand and go back and look at and read.
I don't think I've ever gone back and looked at what I wrote when my mother died. Maybe I should. Maybe I shouldn't. But it's there if I need it and I do remember how sad it all was, the exact opposite sort of death she had ever wanted and how the song "Sister Morphine" kept playing in my head.

Well! This is morbid as fuck!

La-di-dah and la-di-dah and all is well here in Lloyd. Chickens tucked up and I'll turn the heat on soon because I am a wimp, until it's time to go to bed and then I will turn the heat way down and open the window above my bed and crawl into the cave of goose-down with my cat who does not care about me at all, just ask her, but who suffers my scratching and stroking gladly on cold nights and who, according to Mr. Moon, kisses me on the lips to make me stop snoring.
"It works!" he says.
"Harumph," I say.
For ten nights I will snore all I want and not worry about it a bit and I guess that is some solace in this great pond of aloneness with all of the green plants silently breathing out oxygen for me to take in as the cat and I breathe out carbon dioxide for the plants to breathe in and thank you for being here.