The wild birds are doing their sunset chirping as the chickens do their going-to-roost fuss and wing-flap. I can hear them rustling as they settle into their places to sleep.
If I have chickens for a thousand years I doubt I'll ever understand them completely. Why do they decide to sleep in this place and with this other chicken and what makes them decide to lay eggs in one little straw-hollow in one nest one week while another week they all choose different places?
Figuring out things like the personality differences is not so difficult. Nicey is very gregarious. Ms. Bob is shy. One of the Chi-Cha's is more bold than the other and will come inside if I leave the little cat door open, following Nicey and is apt to explore away from the yard. I found her and Butterscotch and Lucille in the little strip of leaves in the church parking lot next door, right beyond the wire fence. They do not know what a fence is and if it does not really provide a barricade, they slip out and go where they want. Still, I am closing the big gate to try and provide a psychological barrier, at least, so that they do not try to cross the road again.
I just went out into the gathering darkness, only the sky to the west harboring some light 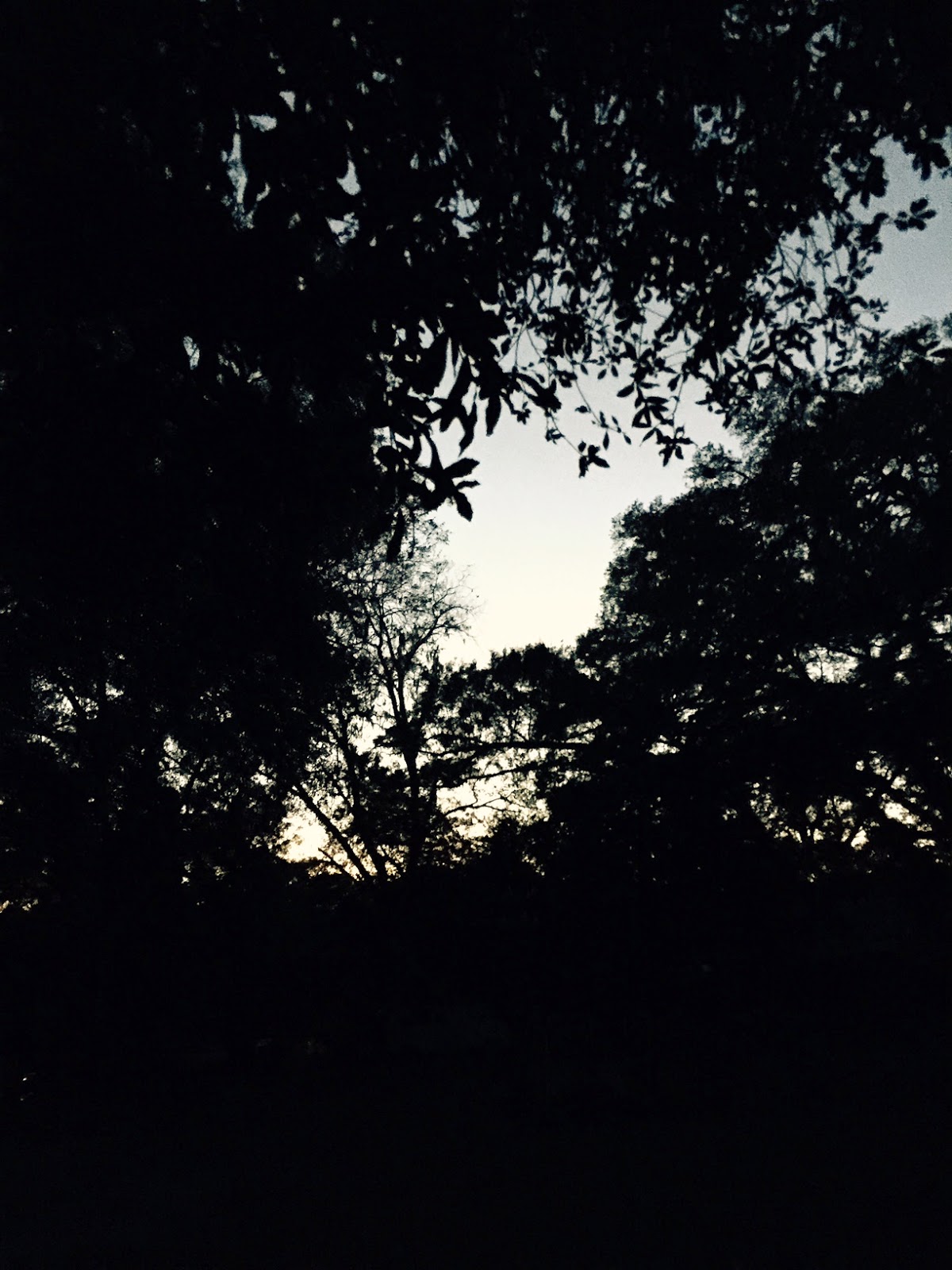 to close the chickens up. And here are a few of my sleepy birds. 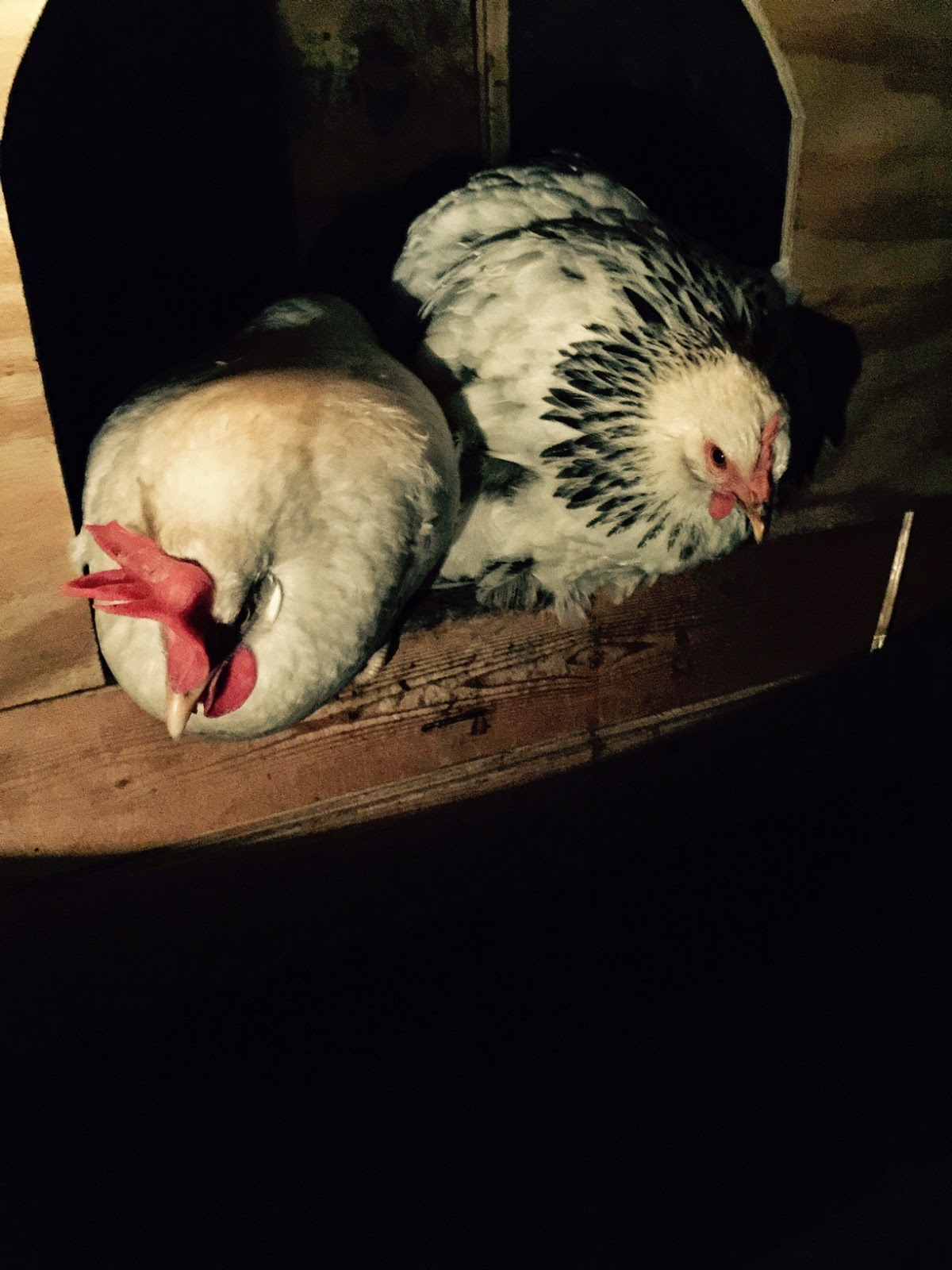 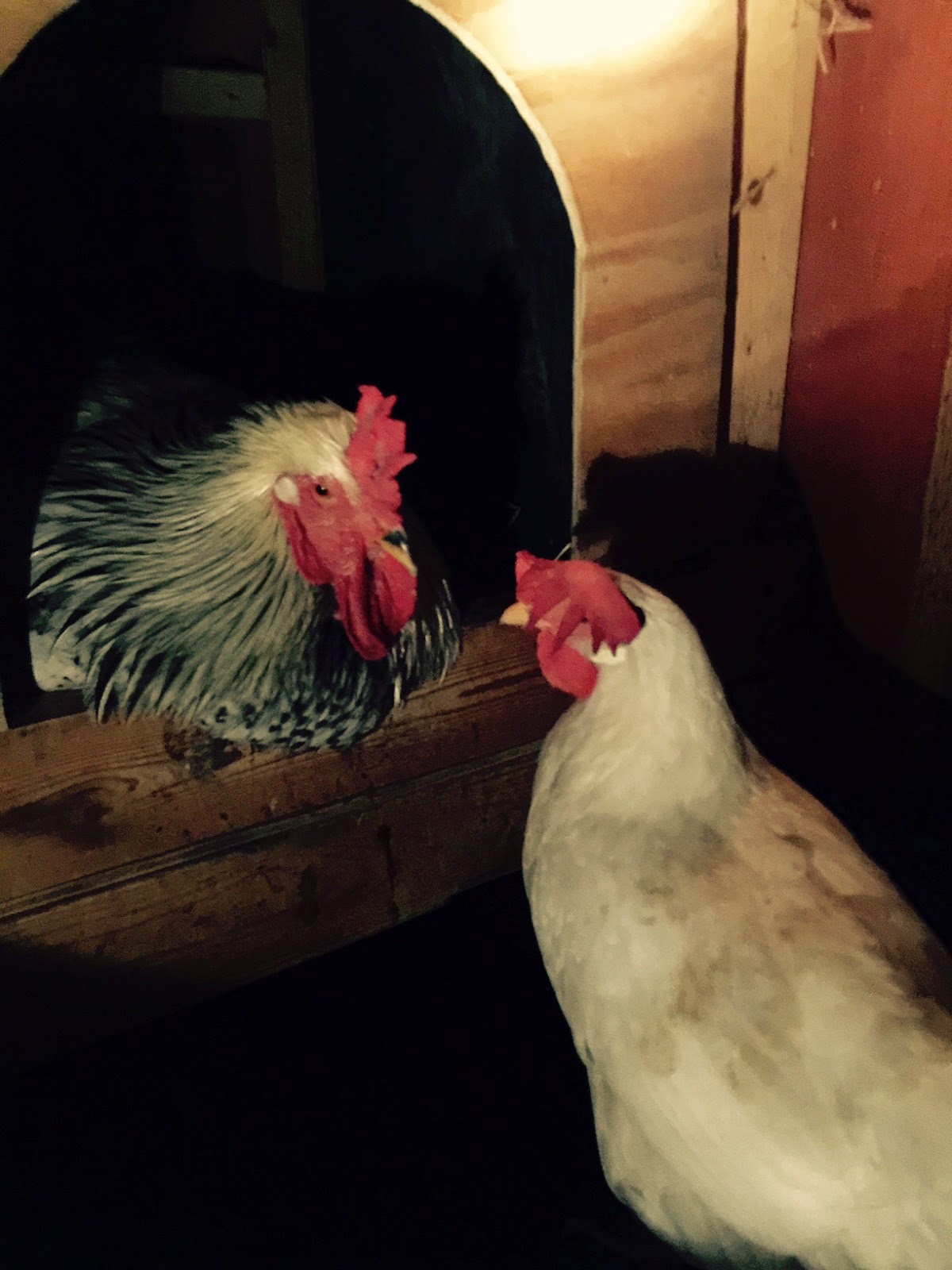 Elvis and the other Chi-Cha sharing what looks like a tender moment. Right after I took the picture, Chi-Cha jumped up into the nest with Elvis and as I closed the doors, she was settling in behind him.

Aren't they beautiful, my chickens? Miss Sharon, one of my older hens, is looking horrible though. She doesn't act sick but my god, the moult has been hard on her this year. Her neck is naked but for quills, she has a random feather hanging here and there. I have no idea how long these now-pet (for they never lay anymore) older girls will live.
We shall see.
If this were the olden days, those hens would go right into the stew pot but I could no more eat Ozzie or Sharon than I could eat Maurice. Which is to say that if I were starving to death, literally, I probably would eat any of them but not while one squirrel survived to eat instead.

Speaking of eating, I met Hank at the Indian buffet (one would think that my new goal is to weigh 700 pounds by Christmas) and we had the best time and the best meal. I really truly see such a difference in my boy. This move for him has just been tremendous. Then Jessie and I went to Costco and she wanted to look at everything which is quite a deviation for me. Lily and I have our Costco routines but Jessie is new to the game and wanted to check it all out. She got a new jacket and we bought a pair of jeans for Gibson who is out-growing all of his clothes. We got nuts and tomatoes and crackers and she bought chips and salsa and we sampled the ham which was, as ham always is, which ALL pork is, delicious to the point of evil.
And look what has arrived! 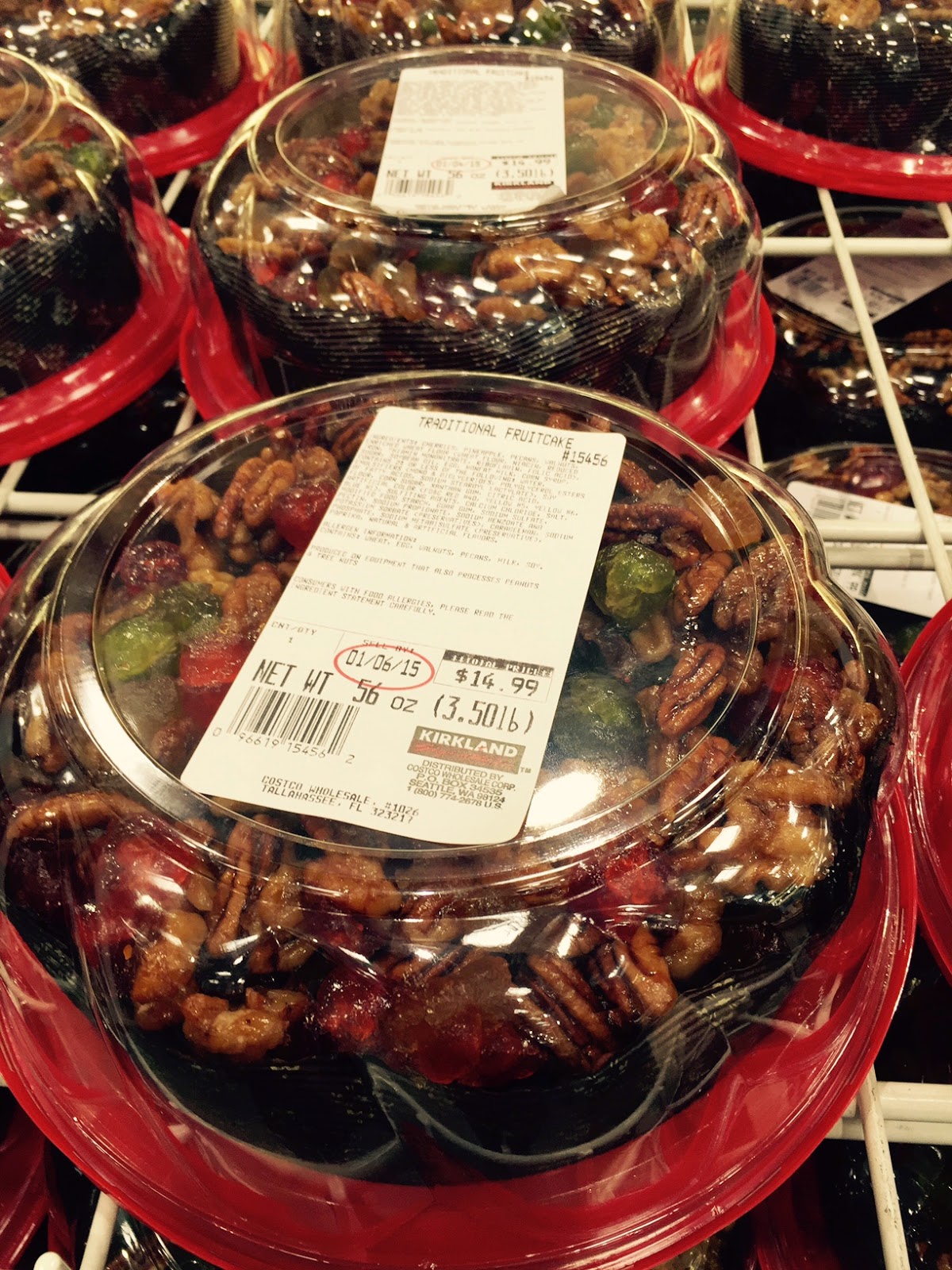 The fruitcake which is so goddam good I see no need to make my own although when they start putting the candied fruit out in Publix, I will be tempted. Who knows? Maybe I'll make a few, just for old time's sake. If you are one of those people who does not like fruitcake, that's okay. I will eat my share and yours as well.
As we walked through the store, Jessie said, "Oh look! They have Christmas lights!"
"Fuck yeah," I said. "It's fucking Santa and Jesus Central here."
I can't believe my children actually go out in public with me. I am becoming more and more profane and unless there are children in the vicinity, I see no real reason to curb my tongue. Honestly, it's probably a reaction to the perception of aging. Twice recently I have been told that I am "so cute" which is what my grandfather always said to my grandmother when she said something that he thought was stupid. It was such a patronizing thing for him to say to her, and even as a little child I cringed when he did it and the next time someone tells me that I am cute, I am going to give them a swift kick in the fucking nuts.
Or maybe not. But you have been warned.

Anyway, Jessie and I walked around the store and talked about all of the things we do when our men are out of town (Vergil just left on business today for over a week) which is mainly to eat foods we shouldn't eat. We did NOT buy the Cheesecake Factory Sampler Cheesecake OR a fruitcake OR tiramisu OR dark-chocolate-covered "super fruits" but when we got to Publix after we'd finished up at Costco, we did buy chicken pot pies.

I am heating the oven as we speak.

All the birds are quiet now. It is getting colder. Maurice is huddled up on herself and I have laundry going because of course. Mick Jagger has a throat infection and the Stones have had to cancel their Melbourne, Australia show. This worries me. Which is ridiculous. I read a review of one of their Perth shows in which the writer of the piece said that he couldn't believe the Stones were still so energetic, so amazing, so nasty.

I guess that they, too, are fighting the stereotypes of aging.

Or hell- maybe we're all just being who we've always been and are even less concerned about what anyone else thinks.
I would like to believe that is true.

Stay warm. Sweet dreams. Don't call anyone over the age of four "cute," bake your chicken pot pie in the conventional oven and not the damn microwave unless you have no choice, try all the different chutneys you can at the Indian restaurant, choose where you lay your eggs and whom you sleep with carefully. And don't let age prevent you from being as nasty as you want to be.
That's all I got for you tonight.