It's A Man's World 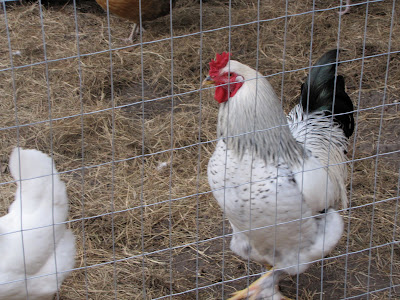 And Mr. Moon needs a lot of stuff. Believe me. When he asked me to marry him he told me that he could fix houses and cars and that bottom line- these are the two things that people have the most money invested in and that in being able to fix these things, we would never go hungry.

Since then, he has opened a tire and automotive business which he ran for years and also worked for awhile with his daddy when he was alive, doing house repair and building additions to houses and he has sold cars too. That's what he does now. He works from a bank where people call and say, "Mr. Moon, I need a blah-blah-blah car." And Mr. Moon finds them that car and everyone is very happy because he doesn't sell crap and he knows what he's doing when he looks at cars. And folks- CarFax lies. But Mr. Moon's eyes, hands and paint-meter do not.

So anyway, a man like Mr. Moon needs a garage. And the man who bought our house in town when we moved out here was a builder. We had a few acres behind the house we sold which we were going to hang on to but the builder dude wanted them too so he traded Mr. Moon a garage for those acres. And thus was built and born The GarageMahal. 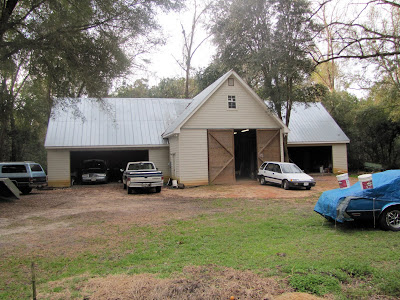 I don't know who first named it that. Hank, was it you? Perhaps it was Mr. Moon himself. I don't know. But it is truly huge. I think it is bigger than the house and still, it is not quite big enough. If it were as big as the entire world, I doubt it would be big enough because I have come to realize that a garage is not unlike a purse in that the bigger it is, the more you will find to tuck away in it.

Mr. Moon is out there this morning, working on a car. He spent the last few nights working on Hank's car. Last night he finished up the brakes and needed me to come out and help him bleed them. I sat behind the wheel and Mr. Moon would say, "Pump, pump, pump, pump, pump! Hold it!" And I followed his directions and soon enough the brakes were bled and all the lines were cleared of air so that when Hank steps on the brakes, his car will stop.

I do not understand any of this. You'd think after being married to a man who sells and works on cars for twenty-five years that I would know something about cars and their innards and the mysterious ways of their engines and gears and wheels and batteries and alternators and so forth, but I do not.

Right now I hear some power tool running. I think it may be a...shit. I have no idea. But it's hooked up to a big air compressor which lives in one of the corners of the garage. See- I don't really get involved in that world out there. I go there if I need to get venison or fish out of the freezer. I go there if he needs me to bleed a brake line. I go there is I need to find a nail or a hoe or something.

And when Mr. Moon was gleefully planning this garage I walked around saying things like, "Jesus Christ, why does he need such a huge garage?" and I admit I was a bit resentful and I'm not sure why except that this garage was going to alter the landscape of these two acres which I had fallen in love with and I was not happy about that.
But now I am comfortable with that behemoth of a building out there which holds all the toys and necessities of a man like Mr. Moon. He has the big boat for going out to sea in and his daddy's bass boat which he will NEVER give up and he has a jon boat and he has the project car and he has his old truck and he has his old Suburban and the freezer and the beer and bait refrigerator and the air compressor and a ton of projects which I personally doubt will ever be completed and he has a radio and he has his tools and, well, it's sort of hard to imagine that in the almost-six years we've lived here he has filled the GarageMahal to overflowing and when he works on a car he has to pull the project car out and cover it with a tarp. 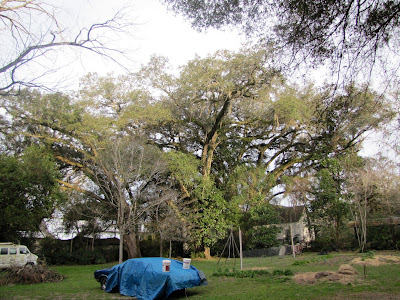 I can't imagine not being married to a man who can fix things. Who can build things like the place where our chickens live which we have christened the Coop Mahal. And a man like that needs a place to keep all the things he needs to build and to fix. Being married to a man like that is as firmly planted in my genes as is the need to get out in the dirt when it begins to warm. And as I have said before, although Mr. Moon did indeed begin to fall in love with me when he saw me make biscuits, it was when he saw me shoveling horseshit for a garden he'd tilled for me that he truly knew I was meant to be his wife.

We are nothing at all alike, Mr. Moon and I, but we somehow fit together perfectly, despite the fact that he is a foot and a half taller than I, a man who doesn't like to sit and read but who can build a chicken coop, repair a car.

So I have my world here in this house where I cook and do laundry and where we eat and sleep and I write and read and take care of my grandson and he has that world out there where he does mysterious things with tools. I like to think we have the best of both worlds- a man's and a woman's.

And I have a strange feeling that before I know it, my baby Owen will be a big boy who will refuse to stay in the house with his grandmother and who will, instead, want to be out in the GarageMahal with his Pop-Pop, learning to fix and repair and build and probably pee on trees behind the garage.

And that will be okay. I'll go out and take them glasses of ice water on hot days and there they will be, sweaty and wiping their faces with rags I've washed and folded. And I just KNOW that Owen will look up at me as if I were an intruder of sorts and he'll be bonded to that man out there because that man has ALL the good toys. They'll be in the Man's World. But then they'll eventually come back to the Woman's World and eat their dinners and fall asleep on the couch, satisfied and happy and they'll be civilized and pee in the toilet because even men like Mr. Moon need to have a cozy nest to eat and sleep in when they're done with their manly doin's out in the garage.

And the world will be set right again, at least MY world where I am almost loathe to admit how gender-role bound we are, but I'm too old to not admit the truth and there it is. 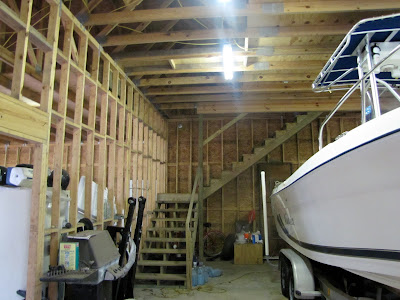 And by God, I'll teach Owen to make cookies, too. And even biscuits if he'll let me. Because who knows? He may find a woman who likes to work on cars and who will fall in love with him when he makes her biscuits.

You never know how these things will work out. And that's another truth you can take to the bank.