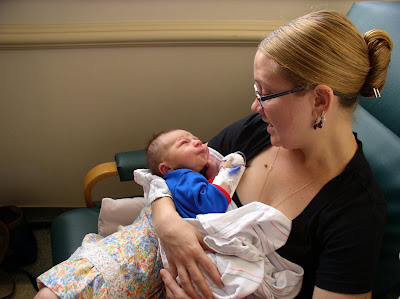 Aunty May finally got to see Owen today. She came up to the hospital while I was there and she held him and she cried.

And then Owen pooped while she was holding him. Lily was just saying he hadn't pooped in a long time and it was worrying her a bit and then, as if he was trying to be a good boy, he let loose. His face got all red the way baby's faces do when they poop and he had a look on his face like, "WHAT?!! Are you freaking KIDDING ME? I have to poop TOO?! GOD, life is so hard!"

And Lily changed his diaper and he settled right back down into a snooze. It's hard work, pooping. Everything is hard work when you're a newborn. Back in the womb there was no work at all. Just being was enough. Sort of like going on a cruise. All you have to do is let them pump the second dinner seating into your umbilical cord and you're good to go. "More lobster, Mr. Hartmann? Here, let me magically make it appear in your belly. Caviar to go with that? Shot of icy vodka? No problem. The temperature okay for you? Oh. It's always perfect. That's right. Comfy? Good. We aim to please."

But he's living on planet earth now and he has to work for his dinners (which is the name Mr. Moon's mama called nursey titties- "dinners" - and how much do we love that?) and work to poop and it feels so disturbing when someone tries to change his clothes or wipe his precious little ass or put socks on him. ARRRGGGHHHH! They're doing stuff to me again!

Anyway, so it goes for each and every baby born. They know what to do to make the milk come, they do know how to pee and poop and cry when necessary. Owen cries like this: "Nanananananana!" Like a goat, sort of. He's my precious little billy goat. He's easily comforted, though, and mostly what comforts him is ninny, also known as nurnies or nursies, also known as dinners, also known as chi-chi's, also know as the tit. Whatever you call it, he likes it, he loves it, he wants some more of it.

I went over to Lily and Jason's house after I visited them at the hospital and made up their bed and fed their cats and cleaned out the litter box and ran a few loads of laundry and went to the store and bought them food so they won't starve. And juice. Gotta have lots of juice when you're nursing. I remember when Hank was born and they sold giant cans of concentrated grape juice at the Co-op and I would make a gallon of grape juice a day and drink it. My favorite thing to eat was a patty melt. And I had been a vegetarian before I got pregnant. I'd fry that meat up and put cheese on it and eat that between two slices of grilled rye bread. Oh my god. That was food of the gods. And fruit salad. Patty melts, grape juice, fruit salad. With raw cashews in it. And I was 21 and nursing my hungry newborn and I was back in a bikini before the summer was half over. Ah yeah, those were the days.

Anyway, Jason and Lily came home with Owen and I took pictures 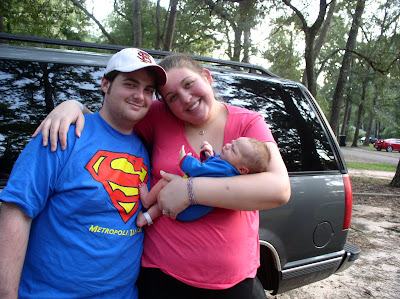 and I told them what I'd done and then I left. It was mighty hard to leave. Not because I don't think they can handle things on their own. I know damn well they can. It was hard to leave because watching them brings back so many memories of my new-mothering days. I remember when Hank was just a few days old and had such a fussy time and I felt so inadequate but something told me to get into the bathtub with him and I did. I held him in my hands and let his body float in the warm water and he quit fussing and his eyes opened up as big as saucers and I know he was thinking, "This feels so familiar. This feels so good." And he was happy. My baby, my instincts.

I told Lily and Jason today what I always used to tell my new mommies and daddies at the Birth Center when I worked there, which was that no one on earth has ever raised this particular child before. I would say, "Look at this perfect baby your body knew how to create. And you know how to take care of him, too. Listen to your gut."
And that's what I told Lily and Jason. That if someone gave them advice or told them something that their gut disagreed with, they should ignore that advice and do what their gut says. Even if I say it. And if they need to tell me to shut up and butt out, to do it. I may have raised four kids, but I have never raised Owen.

And that's the damn truth.

So I left. Owen had on a cotton diaper and nothing else and he had no heplock on his tiny arm, no monitoring device or clamp on his navel. Just pure Owen and a white cotton diaper, soft from use by his Aunty Jessie.

I'll go back tomorrow with my favorite Mama's Post-Partum Meal: Steak salad, homemade Challah bread and prune cake. Don't you laugh about prune cake. That is some good cake.

What a great day. Owen came home. He is healthy and strong. His mama and daddy are fine, smart, and capable and they love him to pieces. Lily doesn't even look like she missed two nights of sleep, much less just had a baby. She is glowing like a sunrise.

And it's Billy's birthday, too. Happy birthday Billy.

I hope all is well with you, too. I shall get back to reading blogs and answering comments soon.
Until then, know how much I appreciate you.