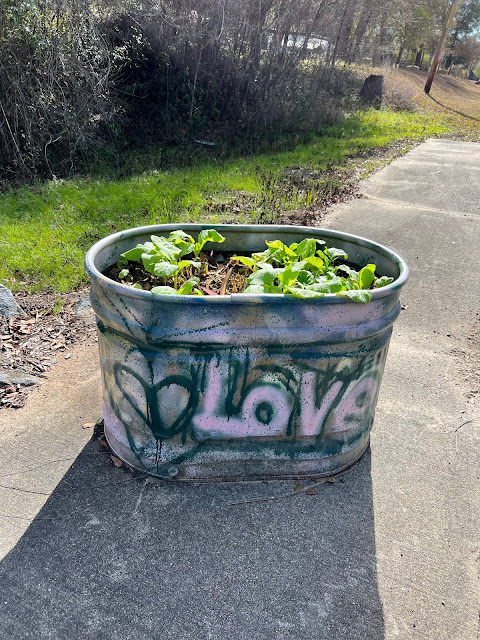 I decided today to walk an old route of mine. I took this route for years and many of you probably remember it. It went through an old, deserted gas station's parking lot to a path in the woods that took me to one entrance to a horse farm and then I'd retrace my steps and go back around the other part of the loop to a different entrance. I did this walk so many times that I could have probably done it blindfolded. My neighbor Abraham used to shake his head at me for doing that walk. He'd often park at the intersection of Main Street and Highway 59, just to watch the traffic, almost right across from the fally-down house and I'd stop on my way home sometimes to say hello. He didn't feel like it was safe for me to walk back there. He grew up here and I probably should have paid attention to him but no harm ever came to me. There are places I have walked that felt hinky to me but that isn't one of them. I always thought maybe I'd see a bear but I never did. Supposedly bears do roam in that area. But I think it may have been the two legged animals that Abraham worried about. That area is right off the interstate exit and who knows who comes and goes there? The old parking lot attached to the deserted gas station has been gated. I think someone bought it. So I don't walk through there anymore but I can get to the same route by going down Old Lloyd Road and then up Subdivision Road and I've done that many times. Ms. Shelly lives on that road which is how I met her. She spends a great deal of time raking her yard which is as tidy and tended as a beloved child, readied for school. She has spent her life working hard from the time she was a child and I have loved talking to her when I saw her out in her yard. We became friendly and she even walked with me once. She's about my age and has lived in Lloyd her entire life.
But then because I needed a change, I decided to start walking on White House Road which was another beautiful walk although I had to drive a few miles to get there.

But today I wanted to go visit that area and see what had changed because I knew that a lot had. The last time I walked it, there'd been a pond dug and woods cleared. Also, the woman that I met that time in front of No Man Lord's whom I immediately liked so much told me that she lived on that road and I sort of wanted to see if I could guess which house was hers. Unlike Shelly, this woman is young. Twenty-something. She's strong and beautiful and determined and I see something in her that I wish I had in me. An independence of soul, perhaps. I don't know.

So I passed Shelly's house and then, on a piece of concrete next to a culvert I saw two animal watering tanks, both painted and planted with mustard greens. I felt like the next house up must be where she lived. And lo and behold, right after I'd passed that house, she pulled up in her car. She'd seen me walking.
"Hey, Miss Mary," she said. I was so happy to see her. I saw her at the post office a few months ago and we'd had another good chat. I swear, sometimes I think I was put on earth to have deep and intense conversations with strangers that get straight to the heart of things, including my own heart. And that's how I'd felt about this woman.
She charmed me. She absolutely charmed me.
Sure enough, that was her house. And sure enough, she'd planted the greens.

We talked for maybe ten minutes or so about how things have changed on that road. From where I was I could see that what was formerly scrub and woods was now cleared land. 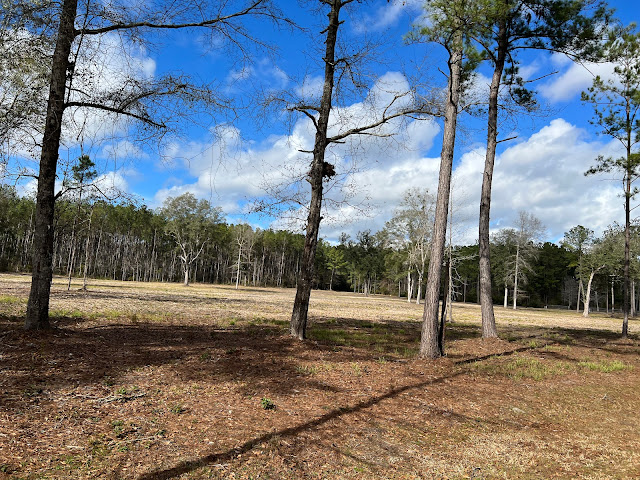 Damn, I wish I'd known they were going to do that. There were the most beautiful wild azaleas growing there and I would have dug up as many as I could have.
We also talked about chickens and dogs and what the freeze had done to our greens and then on to age and she asked me how old I was. I told her and then I said, "My body feels that age but my spirit sure doesn't. When I look in the mirror, I am so shocked."
She laughed in that low, chuckling way of hers and of course, I teared up because I cry at the drop of a hat.
When it was time for me to walk on, she said, "Now don't you exercise too hard," and I said, "The chances of that are pretty low," and she laughed again, turned around and went home.
I walked on back to the wood's path and part of that looked pretty much the same although when I ducked off the trail into the woods to pee where I always have, there was a line of barbed wire up where before there had been nothing. I suppose they'll be clearing that next. 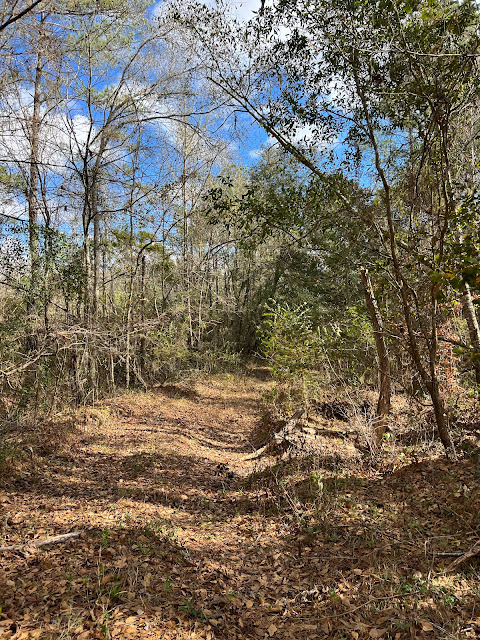 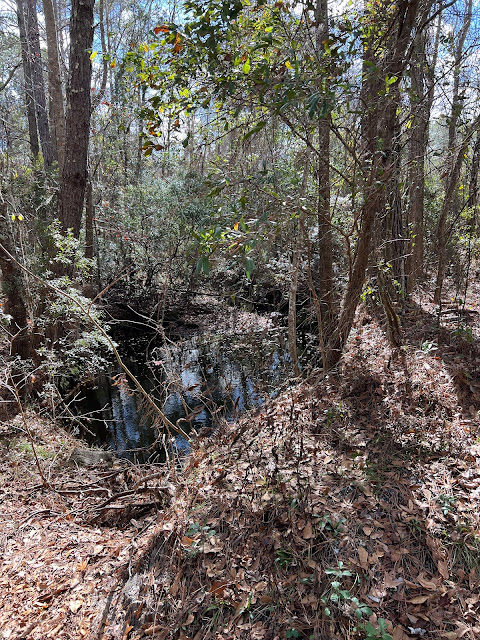 And then, again, I retraced my steps and walked back to Highway 59 and stopped at the post office and came on home.
I planted another row of arugula and a row of lettuces. We shall see if anything at all comes of that. I picked greens and turnips to cook for our dinner and I have them simmering. It's drizzling a little bit and I hope my seeds get watered in.
I hear that Levon had NO tummy pains last night or today and I've told Jessie that it was those four desserts he ate at Chow Time that cured him.
I'm pretty sure that's not true but it is funny.
Tomorrow I'll pick him and his brother up and spend some time with them. I'm looking forward to that.
Here's a picture of what the sky looked like today. 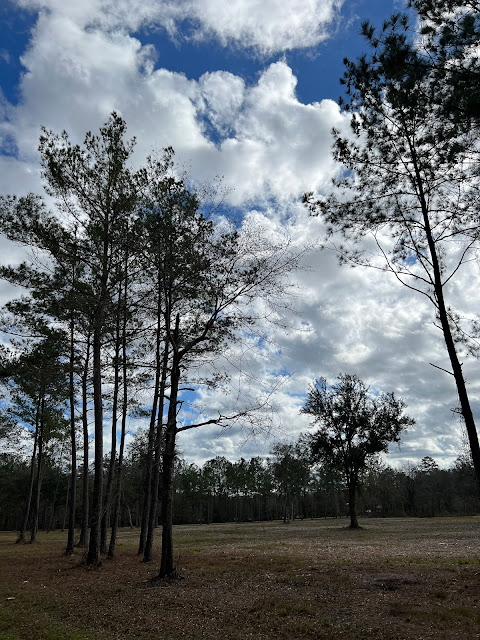 In the last few pages of "The Morning Star" by Karl Ove Knausgard, I read a passage that knocked me on my ass. I'm going to post it here and I'd like for you to tell me what you think about it if you want to. I have thoughts. Sorry I cut off a few letters. I feel certain you can read it anyway. 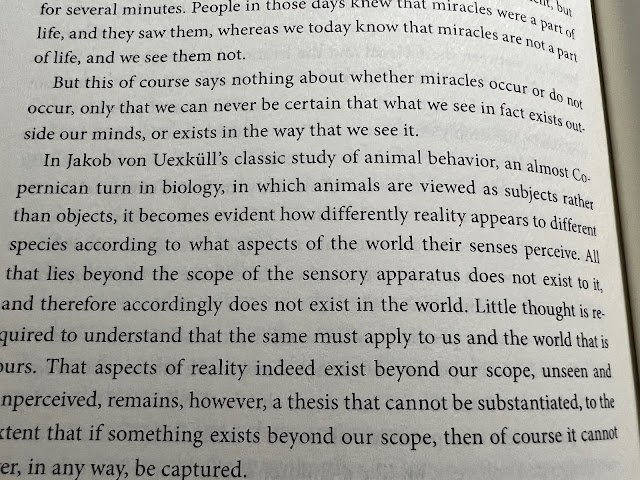 It's not the part about miracles that struck me, but the part about how if our senses cannot perceive a thing, we cannot know it exists, which does not mean that it doesn't.
Discuss.
Love...Ms. Moon