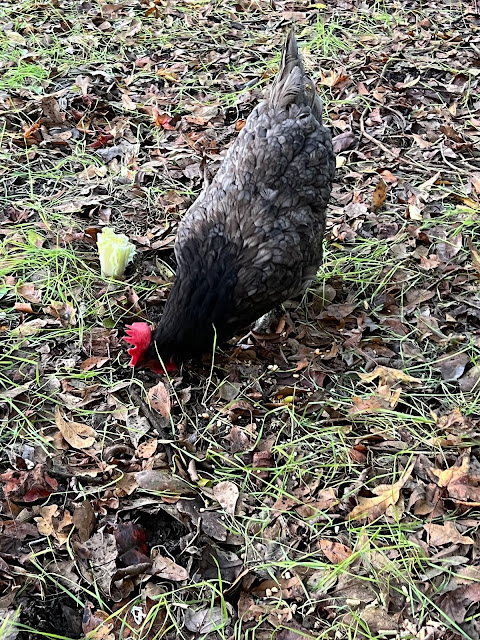 Last night before I got supper on the table (and by the way- french fries made in the air fryer are supremely delicious) I went to check on Miss Moana. I was so hoping she was in the hen house where I could close her in most safely but I knew that at Jessie's, she had been refusing to go into their roost at night. But there she was, drowsy and safe on the branch that Mr. Moon put up in there for the chickens who did not want to sleep in a nest. So I was able to close the sliding door between her and the coop run which made me feel secure, and I hope it made her feel that way too. I keep telling Mr. Moon that I think she remembers being here when she was young and he says, "I know you want to think that."

Anyway, this morning when I went to let her out she was waiting right by the sliding door and hen-strutted into the coop and proceeded to peck at the treats I gave her. I hope she's happy. Or at least as happy as a cooped, single chicken can be.

A few days ago, I asked Glen if perhaps he'd like to go to a movie today. I had a yearning to go see "A Man Called Otto" with Tom Hanks based on the book, "A Man Named Ove" by Fredrik Backman. I had read the book and as so many people did, fell in love with it. It's been so long since I read it though, and because my memory sucks so much, I could not remember a whole lot about the book except for the basic plot and of course it was set in Sweden while the movie is set somewhere here in the US.

Up until a few minutes before we had to leave to get there on time, I was being wishy-washy about going. We go to the movie so seldom that I always want it to be a true movie experience, popcorn and all, but we'd just finished our Sunday big breakfast and the idea of popcorn wasn't that appealing and I thought, well, we should just stay home and I'll do some yard work, but then I thought, what the hell? So we went. 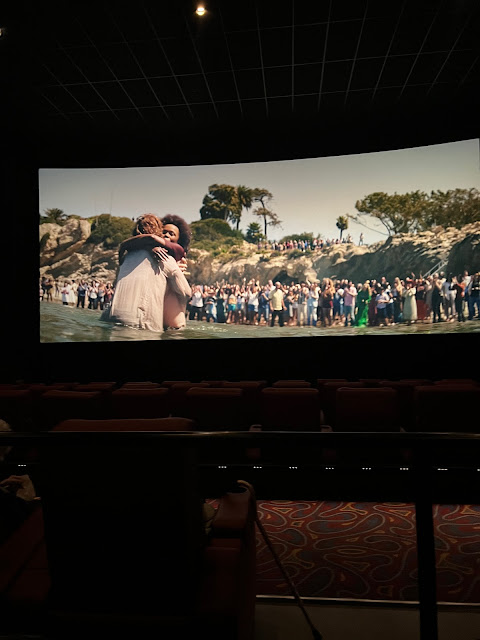 That is not from "A Man Called Otto" but from a preview of some Kelsey Grammer movie supposedly based on a true story about some pastor opening his heart and church to hippies.
Hard pass on that one for me. Thank you.
We did get some popcorn. Just a little bag but it had to be done. The man got an Icee and I got a root beer and he had to show me how to make my seat recline so that I could use the footrest.
Jesus but movies have changed. I still remember the worn "velvet" seats that flapped up when you got out of them at the Ritz in Winter Haven so that they could be swept under. The popcorn is still delicious though, covered with fake butter, and a root beer is a root beer. The prices are astronomical now, of course. You could probably get a decent motel room for what two tickets, a small box of popcorn and two drinks cost. But hey- if you only go once every four years or so, it's not such a sin.
None of the previews looked like anything I want to see. Who comes up with these ideas? Adam Driver and a little girl on some distant world where they have to kill dinosaurs? Jesus returns as a hippie? Okay, there was another one that didn't look so bad but I'll be happy as hell to wait until it comes on Netflix.
We held hands and I even put my hand on his THIGH and thought about how doing that in high school would have totally ruined my reputation.
I don't know about Mr. Moon but I got a frisson of excitement, being so daring in public.
I liked the movie. A lot. I'm one of those people who pretty much love Tom Hanks in whatever he does. But the woman who played the second leading role, Mariana Trevino, was so good. I fell in love with her. The plot is hardly groundbreakingly original. A bitter older man discovers that his life still holds worth and meaning. I think that Bill Murray did it far better in "St. Vincent" but it was still a moving film. I cried in quite a few parts and Glen got a little teary too. At the end, I was almost afraid I was going to start sobbing out loud but I am a very emotional person and cry all the time so that didn't mean a whole lot. I do not like movies that I feel jerk my tears but I felt that the emotional scenes were fairly organic in this one.
I had a really good time, and I have gratitude towards my husband for taking me to see a movie that probably would not have been his first choice to watch. I just told him that I really appreciate him taking me to see it. "Wasn't that fun?" he asked. "But it made me cry too much."
"You know I fell in love with you because you could cry," I said.
Then I thought for a second.
"Well, partially."
"I know," he said. And he does.

I do love that man. About an hour ago he made me laugh so hard I almost choked. I'd tell you what he said that made me laugh but that would not be appropriate. Or prudent. Private joke and all that. I could write a novella on why I laughed so hard. Maybe someday I will.
Long time love can surely be a fine thing. As can going to a movie on a Sunday afternoon.
Both can make you laugh, both can make you cry, if, it's a good love and if, it's a good movie.
That's my opinion, anyway.