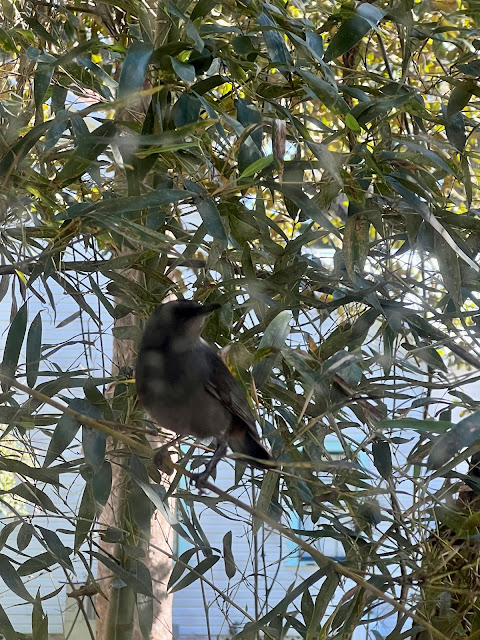 This morning the same little bird was back at it, trying to come into my bathroom. Either that, or trying to smash the bird in the reflection of the window. I'm not sure that's it, though. I've now seen the bird do the same thing on cloudy days when the sun wasn't shining enough for the bird to see its reflection. Whatever the impetus, it is a determined thing. It always perches on that same slender bamboo stalk. It gets itself settled and then makes a few tiny ruffling movements and then POW! Up to the window it flies, bouncing its tiny little head off the glass. And then it flies straight back to that same stem and settles itself and begins the whole process again. This goes on for hours.

Curious, indeed. As Hank pointed out when I sent everyone a picture this morning, "Well, it is a very nice bathroom."
Perhaps it only wants a shower.

It was another beautiful day and so I took a little walk. It would appear to me that No Man Lord may be building something. He moved the RV that he lives in and where it had been sitting, began to dig what looks like a foundation. There are lines going from corner-to-corner. I never do know what he is doing. I did not see him out today. He has a group of guys who come and hang out with him regularly and I suppose they are helping him with this project. I could see him building something very, very slowly, like they do in the poorest sections of Mexico where they earn enough money to buy a few cement blocks and begin there, adding to walls and roofs as they can afford.
I can also easily see him beginning something and then walking away from it. His projects come and they go. I remember talking to that woman I met in front of his yard one day that I liked so much. I asked her what Harvey was doing. Harvey is his real name. "Oh you know," she said. "Same thing Harvey always does."

It hasn't been much of a busy day. After my walks, I always feel as if I have accomplished enough which of course is silly, but that's the way it is. I took Moana some treats from the kitchen and then I turned the compost out by the garden and planted some onions that had sprouted. I have no idea why it's so fun for me to grow plants that arise from my kitchen but it is. My greens are still hanging in but barely. Almost all of the lettuces were shocked to mush. The collards and mustards and turnips are coming back, and so is the kale, I think. But slowly. The arugula just looks like hell and I should replant it. I think there's enough time to get enough of that for more salads before it gets too warm, especially the way it springs forth from the ground so quickly.

And then I decided to trim the rest of the segos in front of the porch. This time I took before and after photos. 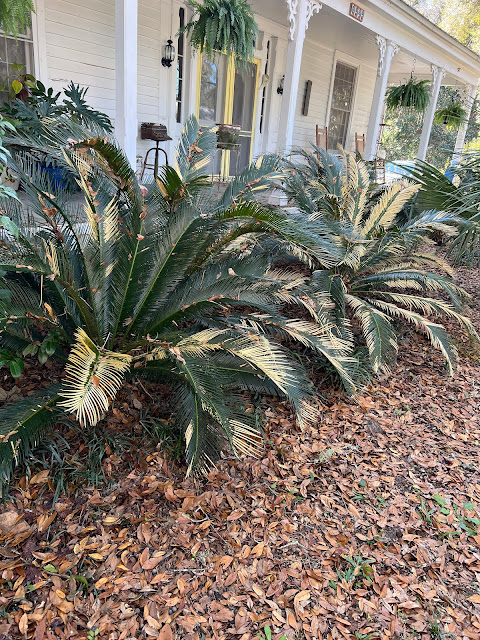 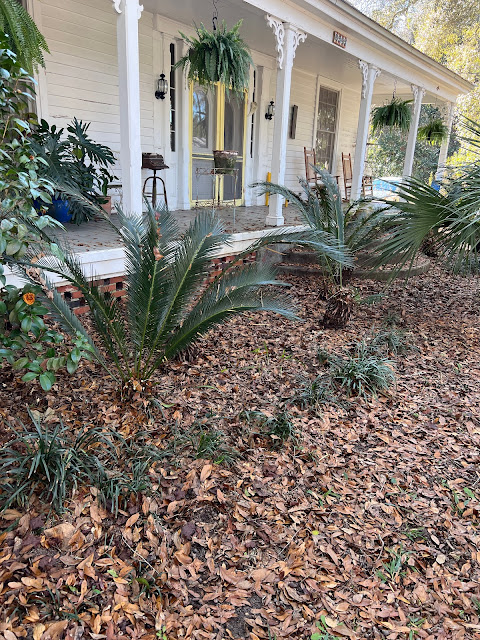 I cut them back hard. But all of those fronds that had yellow in them needed to go. I've seen them trimmed of all fronds in winter and they seem to survive just fine. I just asked google if sago palms were around with the dinosaurs, and yes. Yes they were. The dinosaurs did not survive the comet hitting the earth but the sago palms did and I am not in the least surprised. I bet the dinosaurs hated them too. Mr. Moon was going to use the last ones I cut to camouflage a duck blind but before he got to it, he discovered that dogs are allergic to them and they do use dogs in duck hunting to retrieve the birds and so that would not be a good idea. I am pretty sure that people are allergic to them as well, as I have so often said. One of the least pleasant things in the world is getting stuck with one of the needles through gloves. It's just a horrible feeling.
I do believe I got my wish about the Canary Island date palms. They are both dying, I am pretty sure. Good riddance, I say! I was cutting fronds off of them today when I found a little wasp nest from last year on the underside of one. 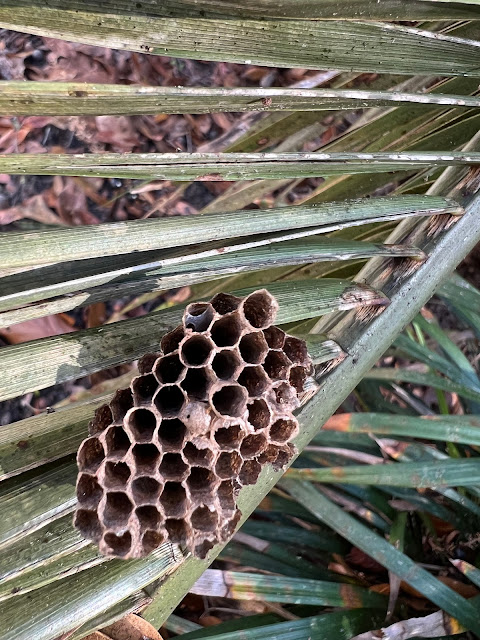 Although I do so much admire their architectural abilities and the fact that some varieties are pollinators, I just hate the little bastards. It's bad enough when I get stung but I hate the idea of the children getting stung which they sometimes do. A few years ago, some wasps had obviously built a nest on the underside of a frond of cabbage palm to the right of my porch steps and I brushed it on my way up to water the plants. I got stung and whenever I think about it, I get an electric shiver all over my body. It's just so RUDE!
My sea grape seeds continue to break through the soil. At the moment I think I have five showing. They look like little mushrooms with a dirt cap until you see the green undersides. If I can get one sea grape plant to plant in a pot, I will be so happy. But just seeing them sprout has been a happiness on its own.
As Kurt Vonnegut once said, "Life. There is just no stopping it."
Or something like that.
The sun is setting. I wonder if the sight of that will always remind me of Ross now. I have been remembering to look up every day, quite consciously, to regard and appreciate what I see. It is a very small moment of mindfulness meditation, I guess.
I need to go close the sliding door to ensure Moana's safety for the night. I have to admit that it is rather depressing to keep her cooped up all day. Perhaps I should ask my friend Kelly if she has a spare hen who is perhaps old or a bit infirm to come and keep Moana company.
I don't know.
Meanwhile, I shall do what I can to make her as safe and happy as I can.
Love...Ms. Moon