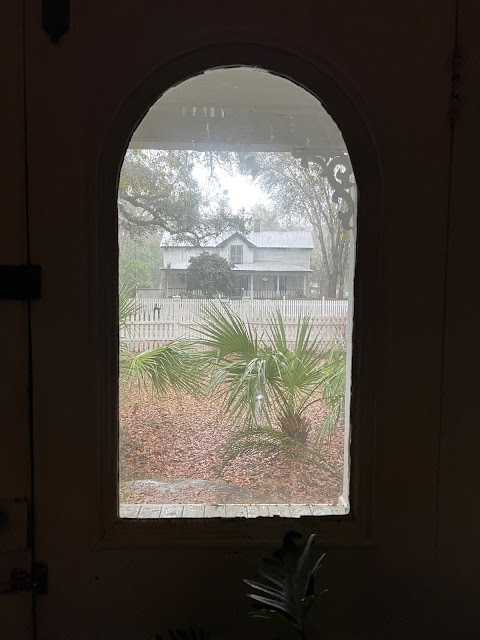 We have gotten the rain today! At times it has been pelting down hard. It's tapering off right now but I just saw a scroll on the TV when I went to kiss my husband that said Jefferson County could soon get a thunderstorm. We've been having thunderstorms all day, sharp spikes of lightening like flashbulbs going off on the red carpet, followed by great booms and rumbles.
Which is how it goes in a thunder storm.
I also saw that there is a tornadic thunderstorm in the vicinity of Nashville, Georgia. I have never heard of a tornadic storm nor did I know there was a Nashville, Georgia and yet, it would appear that there are both. Nashville, GA is between Moody Air Force base and Alapaha, Georgia. It's not even that far from us. It has a population around 7,000 and is called the City of Dogwoods. It's fairly close to Valdosta, Georgia where I once got married in their lovely courthouse.

You needed to know all of this, right? Oh, I could go on for days about nothing more than the odd place names in Florida and Georgia. We are blessed with many names that come from the languages of the indigenous people who were living in the area when the good ol' white folks came along and claimed the territory as theirs. Tallahassee, for one, which supposedly means "Old Fields". We also have Okeechobee, Sopchoppy, Wacissa, Weeki Wachee, Alachua, and of course, Apalachicola. But we also have Two Egg and Yee Haw Junction. We Floridians laugh and laugh when people mispronounce the simplest names like "Sopchoppy."
All right. We don't really. Well, sort of. Because you know- there's not that much to laugh about here in Florida except for meth users shoving alligators into drive-through windows and iguanas falling out of trees during freezing weather and so forth. Neither our humor nor all of our citizens are very sophisticated.
But oh, we're certainly a funny bunch.

So. How are you tonight? I'm fine, I think. Vergil may or may not have covid. The kids have been sick-ish too so I guess they may or may not have covid. Or had it. They're better now. Jessie doesn't feel that good either. If Vergil does have it, then Glen and I have definitely been exposed. It's so weird that neither of us has gotten it.
Yet.
And after all the boosters we've gotten, I would be surprised if we got it and it was a severe case. But who knows?
Not me.
Honestly, y'all. I do not know shit.

Okay. Wait- here's something I know- that cherry pie was damn good. Also? That the Dollar General stays open until 10:00 p.m., meaning that Mr. Moon was able to go buy ice cream to go on the pie. As much as I fought that store opening, it has not been the end of the world and a few times it has been a true convenience for me. I have not spent a lot of money there but if you need children's tylenol in a hurry, you can get it there. Or, you know- ice cream.

I also know that Kamala Harris was in Tallahassee today, to mark the occasion of the 50th anniversary of Roe v Wade and to pledge support from Biden to keep abortion legal, safe, and available to all women in the US. She spoke at a place called The Moon, which is mostly a concert venue. A rather intimate concert venue. I have seen some amazing music there. My daddy, B.B. King. Ladysmith Black Mombazo. The Neville Brothers. Joan Baez. Etc. But today Kamala had the stage.

I haven't been talking very much about politics or current events lately. I am overwhelmed with despair, I think. More mass shootings, classified documents found in Biden's home and offices, the goings on of the Republican led House of Representatives, the ongoing battle in Florida for the rights of voters, the LGBTQ+ community, and anyone who has a brain in their damn head.
God. It's hard.

But here we are! We got rain and I myself am fine and so is my husband. I really need to go cook our supper. I'm running late.

I wish peace and health and comfort to all of you on this Sunday evening, even as the world seems to be falling apart. There is still good. Let us be representatives of that if we can be.