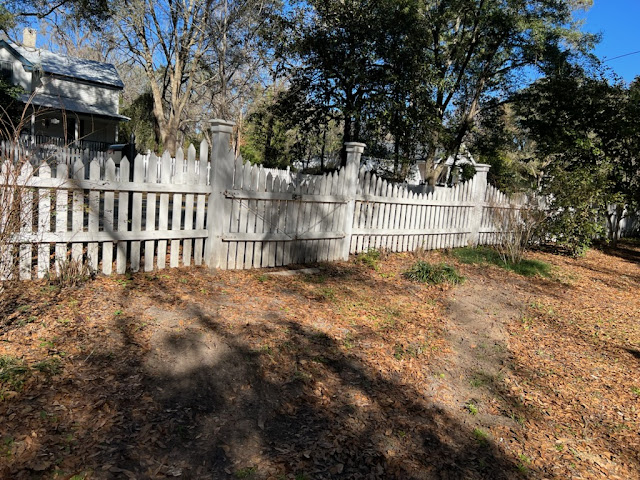 What do you see in that picture? There's a camellia way over to the right and two Spireas which I can only identify because I planted them. Soon they will be putting out their tiny bridal bouquets and little green leaves but for the moment they are still only very thin brown stems. There is also some border grass growing where it should not and some other assorted weed-like plants, a fence, and a gate.
Do you know what you DON'T see there?
CANARY ISLAND DATE PALMS!
Between my evil wishes and the freeze and quite possibly some sort of disease or parasite, they are dead and gone. Mr. Moon got out there today and hacked at the roots and then chained them to his truck and pulled the fuckers out.

Never again will I be pierced by one of their needles and never again will I curse myself for planting them. Haha! Now of course I need to try and figure out what to plant in their place. I'd love to plant more cabbage palms because to me, they are Florida. But I suppose a few more camellias wouldn't hurt. Or cedar trees, which I love.
Oh dear. I suppose I shall have to go to the nursery and wander around to do research. That area does not get a whole lot of sun due to all of the oak trees in our yards here. Really, camellias are probably best suited as they do not mind being underlyers. In fact, they prefer that.
I have discovered what the name of the camellia was that my former next-door neighbor cut down when he moved in. I loved that camellia. Anyway, it was a Purple Rose Dawn. Here's a picture of what they look like. 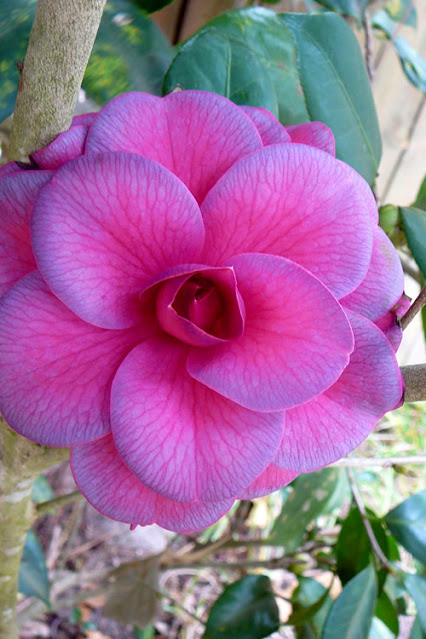 I mean- how exquisite is that?
Neither camellias or palms are fast growers, or as I always say, "Not an instant solution to your landscaping needs." I remember a former neighbor who would buy small plants and trees for her yard with the words, "I'm young. I can wait." I laughed because I was too.
Well, I ain't young anymore.
The other night Mr. Moon and I were discussing this and he truly does not like the idea of planting cabbage palms because before they grow tall enough, the fronds can block pathways. As they very much have in the case of the two I've planted in front of the porch. I keep telling him that someday, they will be tall and stately and that will not be a problem as the fronds will be high up in the sky.
"Not in our lifetime," he said.
"That's not the point," I replied.
He laughed.
But of course it is true. I mean, it's a cliche by now but we don't plant trees for ourselves. We plant them for the people who will come after us.
I was so lazy today. I did not do one bit of yard work or house work either. I did go outside to admire what Mr. Moon had accomplished with the Canary Island date palms and also, clearing the saplings from underneath the fig tree. I took a picture looking up through the fig's bare branches to the oak trees and the bluest sky imaginable above. 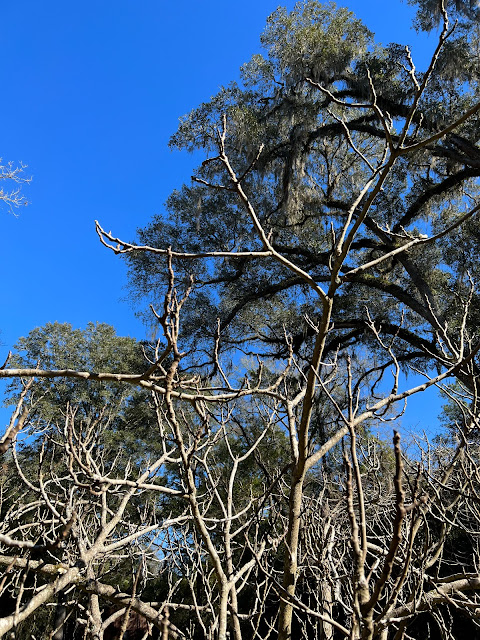 "I hope you feel better, Fig Tree," I told it.
I think it does.
And so it has been a Sunday and not a bad one at all. It's been a tiny bit warmer which is nice. I am nowhere near ready for hot weather but like many plants, I am not cold-tolerant.
I did some more mending on Mr. Moon's jeans. He absolutely told me that he wanted me to patch a heart on the rip he made. My old man is not what you'd call a hippie so I was surprised but delighted. We do still surprise each other sometimes.
We were talking today about how lucky we are to still love each other the way we do and I said, "I don't think it's that common."
"I don't either," he said.
"We're nice to each other," I said, "And maybe that's the secret."
He laughed and said that may be true. "We're sweet," I told him.
And generally, we are. It's really sort of amazing when I think about it but we truly do cherish each other and try to demonstrate that in our actions. But as when asked about child rearing, if I had to give my opinion on how to have a long-time happy marriage, I would have to admit that I only know how to have a happy marriage with the man I'm married to, just as I only know how to raise the four children I raised and even there, I do not pretend to know how to raise them best. I did what I could and loved them, loved them, loved them. However, mistakes were made.
Many mistakes.
At least with marriage, you get a long period of time, if you're lucky, to figure things out, to learn what works and what definitely doesn't, to let time sand away the sharp bits and encourage the growth of the good ones. With kids- well, basically after they move out of the house, they are exactly who they are and although we all change and grow as we age, there's little that a mama can do to alter that process.
And here we are again as I start talking about yanking palm trees out of the dirt and end up being all philosophical and shit about marriage and child rearing.
Mr. Moon is going out to shut the door to the hen house for Moana. Last night I did it and here's a picture I took of her feathers. 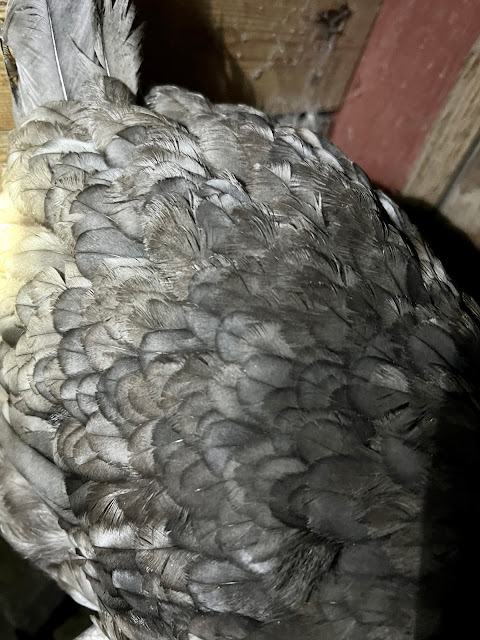 Talk about exquisite! And they are even softer than you would think. Moana is a sweet talker and we are enjoying having her here with her sweet hen ways.
Maybe sweetness is the secret to it all.
Who knows?
Not me.
Love...Ms. Moon
Posted by Ms. Moon at 6:27 PM