There Will Be Blood And A Spirit In The Sky 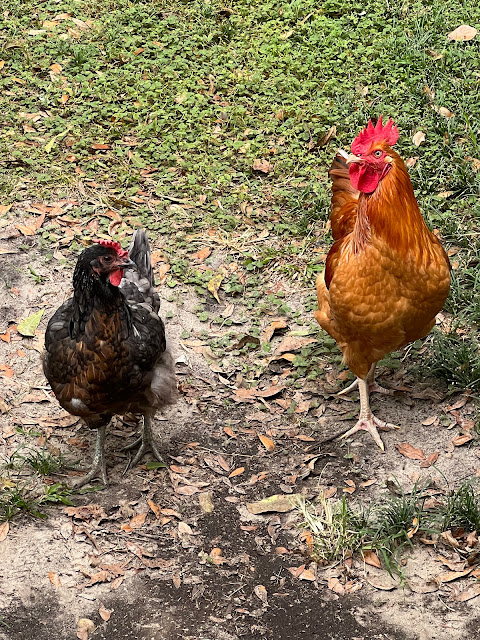 The Happy Couple
Twice in two days now I've not had time to answer comments which I am not comfortable with. But sometimes it happens. I got home a few minutes ago from town where it was Levon and August pick-up day.
But before I get into that, let me show you these pictures from last night. 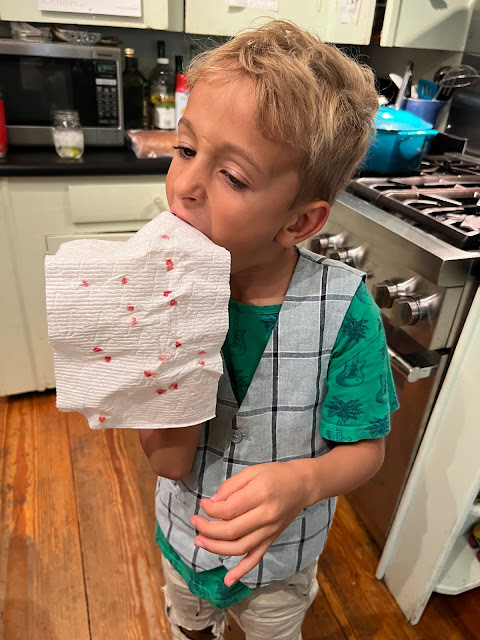 When August walked in the door he announced that he had another wiggly tooth and did I have a paper towel because he wanted to pull it. He's lost three teeth now in a short amount of time. His dad pulled his first one, and he pulled the second one and he was determined to pull this one too. He made many attempts as you can see from the little toothy blood prints all over the paper towel. Jessie and I, who both graduated from four-year nursing school programs were being squeamish about it and advised him to just wait a day as it wasn't coming out easily.
"No way!" he said. "Now when it's this wiggly."
And then he did it and he got the requisite warm salt water to rinse it with and then he looked like this. 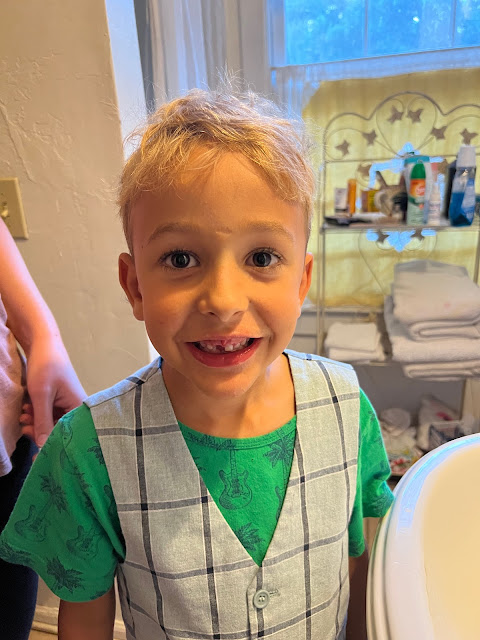 Mr. Snaggle Tooth! He was deservedly proud.
Glen and Vergil got the whatever-it-was-they-needed-to-do done on the Camaro which started right up again and they came in the kitchen, happy and hooting. Well, Mr. Moon was hooting. Vergil was mostly just smiling.
Shots of bourbon were consumed in celebration.
Jessie gave the boys their showers and put them in their pajamas while I cooked the dumplings and then we all sat down to eat. 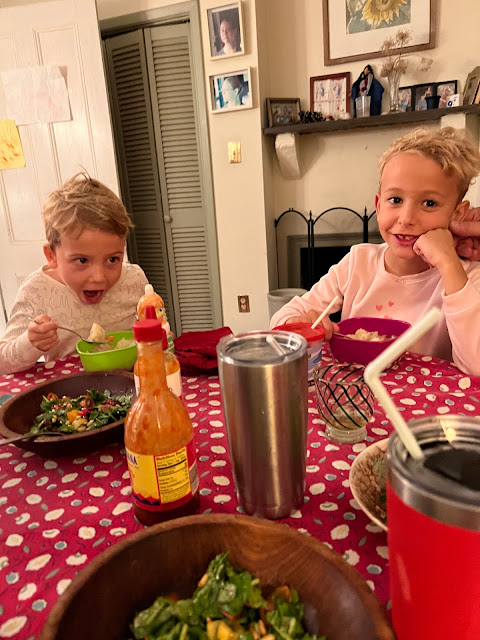 Happy, happy, happy.
It was about at this point though that August and Levon began to hit their wild-phase of the evening. The combination of being tired and doing something different and exciting on a SCHOOL NIGHT overcame them and after supper they were bundled off into their car seats and driven home to sleep.
When I picked up Levon at school today he said, "This is so silly!"
"What's silly?" I asked him.
"Seeing you today when I just saw you!"
"It is silly," I said. "Yet here we are."

We went to Lily's Publix and got to see her and I bought a few things I needed and got a sandwich and then Levon and I went to the library on that side of town where there's a cool little playground. Levon did all the stuff 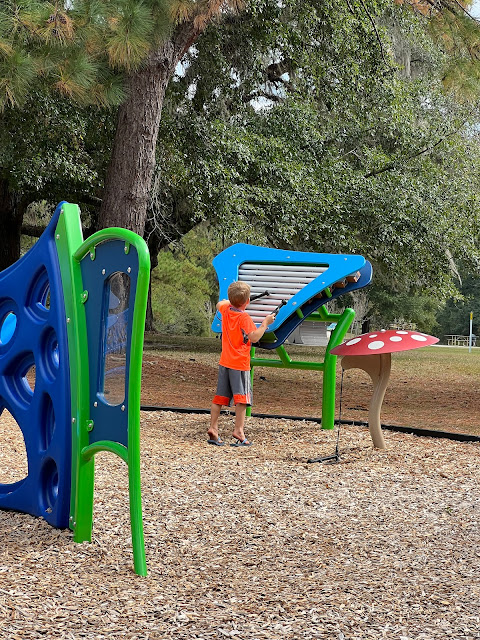 while I ate my sandwich and then we went into the library where we both picked out some books. He helped me check them out with the self-check out and while we were doing that, we looked up to see my ex's wife who laughed and said, "We were just talking about you!" They've been in Vermont all summer and it's been a coon's age since I saw them even before that so it was nice to see her and we did a quick news-exchange. When we left the library, there was the ex too, who was waiting on his wife and it was good to see him.
When Levon and I got back to his house, we read a few books and then I let him watch some horrible fifteen minute super hero thing on Youtube and then we went to get August.
Now, Mr. Moon had told me that when he was on his four thousand mile road trip, they had listened to a whole lot of seventies music and that he'd really enjoyed it. So today in the car I turned on the radio to the oldies station and Levon and I both enjoyed that. I asked him at one point if it was too loud in the back and he said that no, it was too not loud enough.
That's my boy.
We heard Martha and the Vandellas and the Righteous Brothers and Norman Greenbaum and Barry White and Chuck Berry and the Mama's and the Papa's. Also, Jumping Jack Flash by the Rolling Stones.
We were rocking out there in the old Prius.
And hey- Jerry Lee Lewis, aka The Killer, died. Honestly, I had no idea he was still alive. What the hell? He was eighty-seven which is a mighty age for someone who lived his youth the way he did.
Here is my opinion about Jerry Lee Lewis: If you took Richard Penniman, aka Little Richard, made him straight, white, and one quarter as talented, you would have Jerry Lee Lewis.
And that is still quite a bit of talent.
Of course, Little Richard was never suspected of killing a wife but that's a whole other story.
Lily has sent out pictures today of her kids in Halloween get-ups.
Here's Maggie with ghost buns. 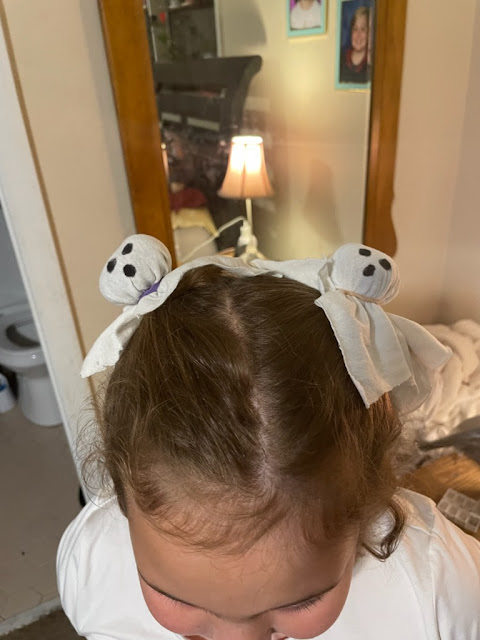 How cute is that?
And from this evening where they are at a school sponsored outdoor Trunk or Treat Movie evening: 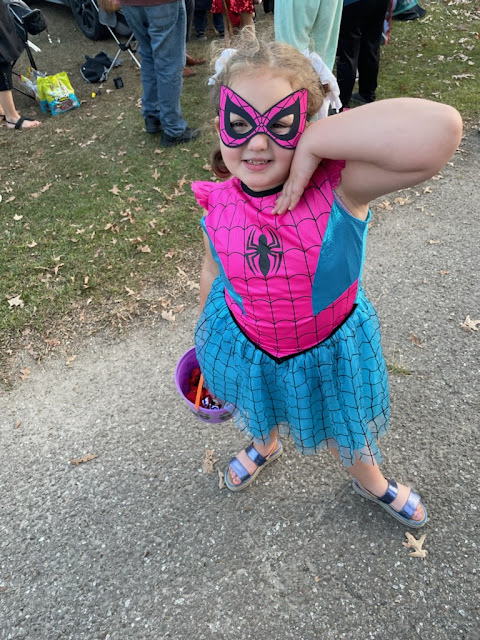 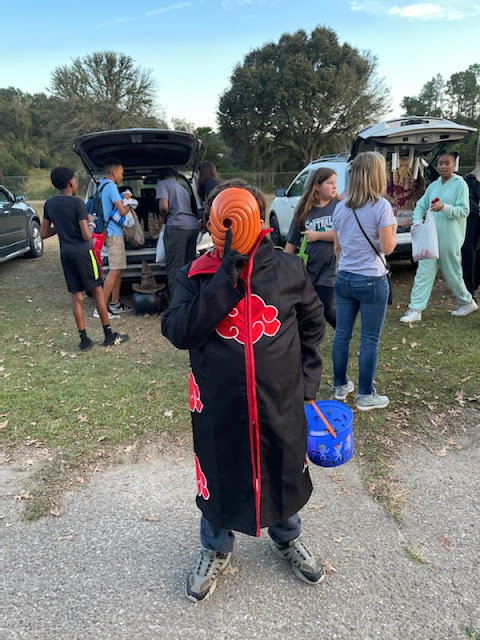 Maggie's costume seems somewhat self-explanatory but I was at a loss about Gibson's. Lily said that he is some sort of anime character to which I replied, "I have no knowledge of these beings."
I have bought no pumpkins to carve, no candy to give out. Let people believe that my house is haunted as it is and as such, should not be approached for mortal treats.
I definitely would not be adverse to handing out candy- it's just that no one has stopped by here in years and if I buy a bag of Reese's miniatures, they are only going to be consumed by me and the man.
Which is not really so bad. But.
Happy Friday, y'all.
Love...Ms. Moon
Posted by Ms. Moon at 7:28 PM