A Bitch Will Cut You. You Will Survive 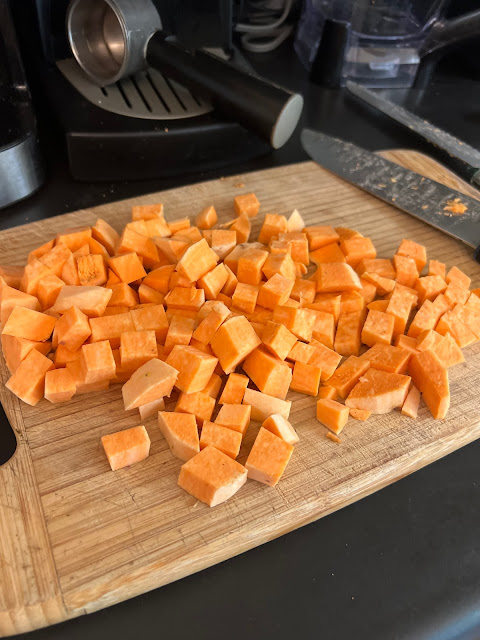 A few weeks ago I was using one of my favorite knives in the kitchen which had just come back from being professionally sharpened. I love this knife and it had a razor edge on it. Mr. Moon, handing it over to me when he brought it home from the kitchen supply store where it had been sharpened said, "Don't show me if you cut yourself."
I scoffed, as one does. Who me? Cut myself?
Okay, okay, it has happened before. What person who has spent any real time in a kitchen hasn't got a knife or burn scar or two? It's practically a badge of honor.
Still, I was not expecting to do what I did the very night the knife was back in my kitchen. I'd made supper, we'd eaten, and I was cleaning up when the I picked up the knife from the cutting board (not the knife you see above) and it slipped out of my hand, fell to the floor, and stabbed my leg just above the ankle on its way down.
I have no idea how that was even possible. And yet- there I was, shocked and with a rather gaping knife wound in my leg that was just starting to fill with blood. I had a band-aid stretched tightly across that thing in seconds because not unlike Mr. Moon, I did not want to see it either. Later on that night I put some of that liquid bandage super glue on it and realized that if I was a normal human, I'd probably get stitches. It wasn't a long cut, but a deep one.
It's still not quite healed.
Sigh.

Anyway, today I chopped one of our large sweet potatoes to go into the creamy cashew butternut squash soup that I love so much. I always add sweet potatoes to it and with our nice huge garden ones, one will do for sure. I did not cut myself. The kitchen smells delicious because the soup has all the good spices in it- cumin and turmeric, coriander and fresh grated ginger, curry powder, (sorry Boud, I buy mine, I don't make it), onions and garlic, too, of course. The vegetables have all cooked to tenderness and now all I have to do is puree them and the cashews and add the coconut milk.
My first alone night's supper.

I made a big breakfast this morning for the hunter who was about to get on the road. He had joked about me making him biscuits this morning and so I did. He didn't even give me his usual, "Oh, I'll just eat cereal," comment. He really did want those biscuits. We ate our breakfast on the porch and I held my hand on his knee as we ate. I'm going to miss that guy.

And he's off and here I am with my soup and my cats. Dang Maurice has already displayed her displeasure at his leaving by biting my hand. She is NOT happy. Mr. Moon has become hers, as far as she is concerned. 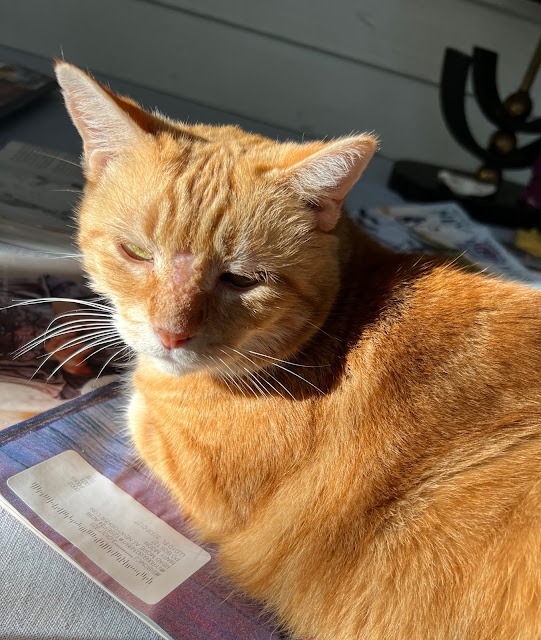 I was being so sweet to her. She was in front of my laptop, making inquiring noises which I took to mean that she was asking where her man was and so I was petting her head and telling her that he is gone for awhile but that he will be back and boom! fang in the hand!
"You little bitch," I told her as she bolted off the table.
I did not mean to speak to her that way. It just came out. I do feel, however, that it was not an inappropriate thing to say under the circumstances.
If it's not a rogue knife around here, it's an orange cat.
There's a black cat that's been hanging around for quite awhile now and I know that if I started feeding him he'd never leave at all. Glen claims that he's the cat of our next door neighbor who used to have a sort of claim on Jack whom she called "Hobo." He permanently moved over here though and I think that's probably because she has about ten dogs. And we all know how that's worked out which is generally terrific except for the fact that he and Maurice hate each other's guts. Check out her nose which is now permanently scarred from their fights. I would not mind having another cat but it just would not be prudent, I think.
Back in the olden days, when Mr. Moon would go off hunting and I had small children at home, it was not unusual for me to take the kids to the animal shelter to get another kitten to love. This was a very passive-aggressive act on my part, I admit. I am older and wiser and more placid now and do not feel the need to do things that say, "Well, I'll show him!"
Ha! He showed me by tolerating every cat I brought into the house. Perhaps not with great joy but grudging acceptance and eventual true sweetness.
So here I am and it is fine to be alone. I can hear traffic from the nearby highway and the sound of my dryer tumbling about with overall hardware smacking the side. A bird with a sweet song is putting the day to rest as the sun goes down. Squirrels are still running up and down trees, their little claw-paws scritching the bark as they go. And oh! I see the black cat again, this time by the chicken coop where Lucky and Grace are getting ready to go to roost. There is a part of me that truly wants to start welcoming this obviously needy cat into our home with bowls of food on the porch steps. I am not convinced that he or she lives next door. I do hear our neighbor calling a cat or something, anyway, some evenings and mornings. Perhaps like Jack, the cat is looking for a more peaceful place to live or maybe it just does not like our neighbor's politics. I always tell myself that this is why Jack moved here. He is a Democrat and definitely NOT a Trump supporter.
Earlier, I noticed some blooming fire spike in the little jungle yard of the original kitchen, caught and set aflame by the lowering sun. 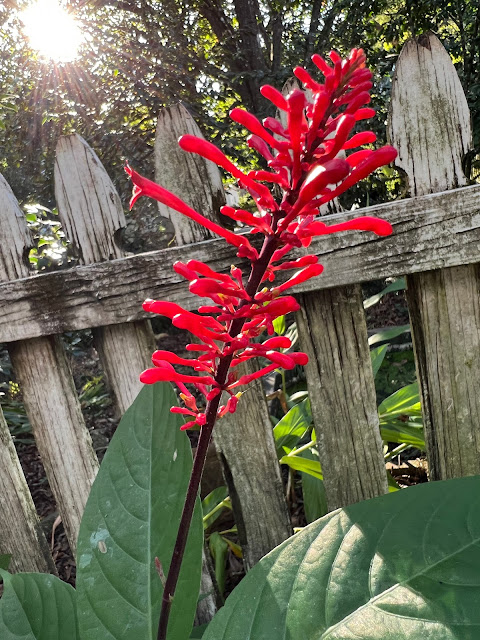 I was glad to see it. All of the rest of the fire spike in the yard was so damaged by last winter's freeze that none of it has bloomed and some of it has absolutely died. Jessie has a great deal of it in her yard and I may ask her for some cuttings so that I can root and plant more. But this survivor makes me happy. 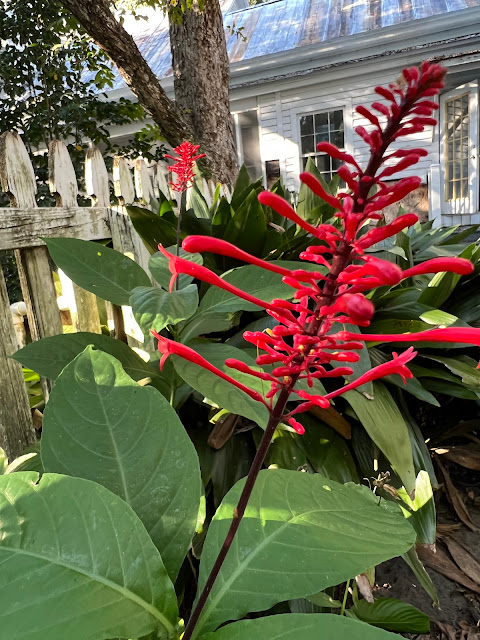 While I was out there, I took a picture of some of the pine cone lilies too. 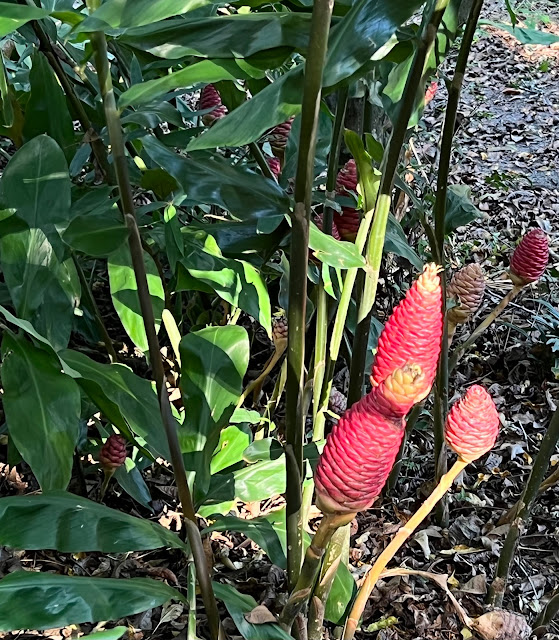 And one more picture of Maurice. 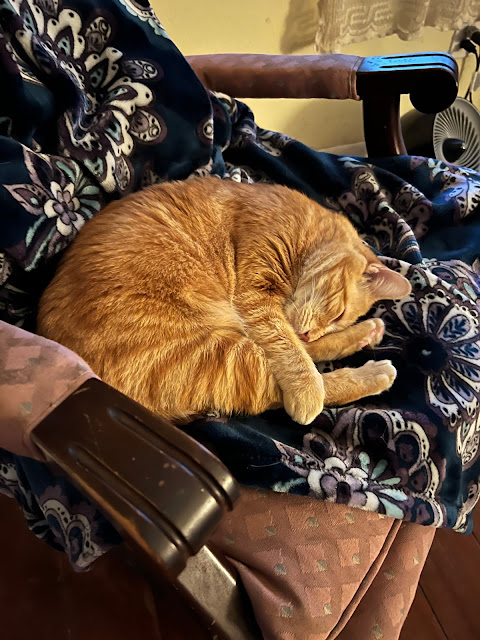 I went into the Glen Den to turn on the light and found her there on the very soft throw that sits on the rocker I bought soon after we moved here and Mr. Moon said to me, "You have bought a grandmother rocker." It had not occurred to me that I was doing any such thing- grandchildren were still just a vague idea, barely a bud of an idea. And now I have spent so many hours in that chair, rocking grandchildren. I am sure that Maurice is there because that is the room where she sits on her human dad's lap. No matter what, I can't help but love that poor cat who never learned the proper way to love.
I understand.
Love...Ms. Moon
Posted by Ms. Moon at 7:00 PM