It did indeed rain last night, probably a little less than an inch but enough to smell heavenly, to sound like life as it should be. Things are standing straighter and fuller today.
We are all grateful.

I just looked at my weather widget and I don't see any more rain coming for over a week but according to the forecast, next Thursday may see lows in the high thirties which is quite unusual for October. Not unheard of. But unusual. Of course a forecast that far out is apt to be wrong so we shall see.

Y'all are just going to have to be patient with me for a little while. Anxiety is kicking my butt again but it's completely explainable for now and that does help. I'm sure part of it is because Mr. Moon is about to leave and the rest of life can be blamed for the rest. To make his leave-taking even harder, it would appear that he got bit by some sort of venomous critter, possibly in the deer stand over at Lily's house the other evening. That evening he showed me three distinct little bumps that we both thought were possibly ant bites but yesterday the area around them began to swell and turn red. He has a genetic disposition towards terrible circulation in his legs (long way from heart to feet in that man) and we are as wary of anything that breaks the skin or causes an infection in his feet and ankles as a diabetic would be. So we immediately began soaking his foot and ankle in warm water and epson salts. It takes the canning kettle to get his entire foot in. He went to the doctor this morning and he said it looks to him like brown recluse spider bites which it well could have been. He told him to continue the soaking and put him on an antibiotic.
So at least I know that has been dealt with the best we could.
He also got his new covid booster yesterday before his trip and has felt rather tired and achy today.
But all of this has only added to my worry which I know is completely ridiculous. When I made the bed this morning, I made sure that Dorothy Anne and Emily were happily sitting up and watching the world and Jack came and laid down in front of them. I know that he is NOT trying to protect them. He sleeps on the bed no matter what, most  nights and parts of every day. But somehow, seeing him there was a comfort, as if he was symbolic of a familiar who watches over babies and again, that soothed me. 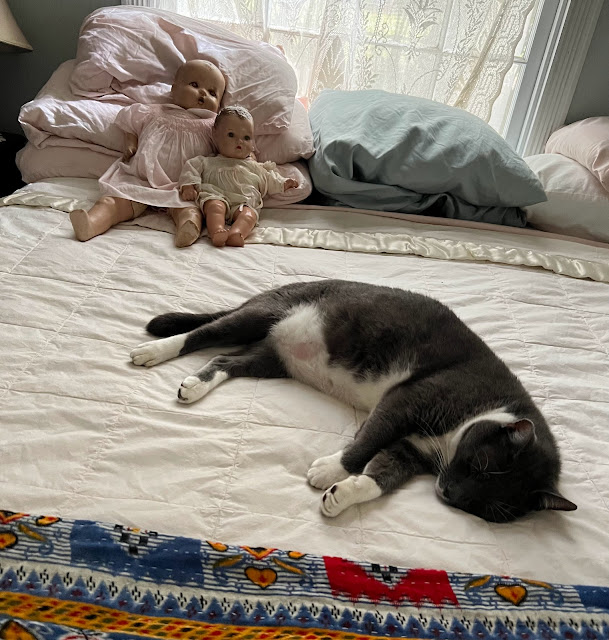 It also comforts me to give a little love to these old, cracked babies who have survived more years than I have.
Today was pick-up-Levon-and-August day and after I got Levon from his preschool, we met Lily for a catch-up lunch. She showed me all the pictures from Las Vegas and it does look like they had a terrific time. She and Lauren got a little bit of adult time when they attended a drag-queen brunch event which sounded like a whole lot of fun. They also did the Hoover Dam thing and took the kids to an amazing toy store. I think, however, they are glad to be home.
Levon was an excellent luncheon companion and watched sports on a silent TV screen above us as we ate. He kept telling us he was so tired. At one point he said that he was "so tired I can only eat ten more bites," which made us laugh. 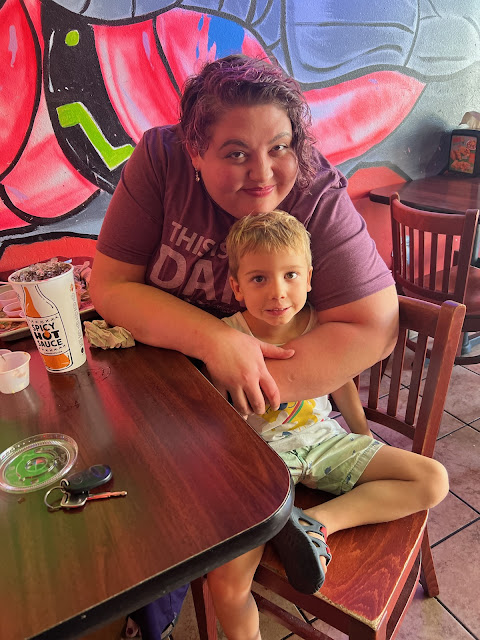 I thought he'd fall asleep in the car on the way home but he did not. We read part of a Captain Underpants book which is not my favorite but far more preferable than a Transformers book, for example. I refuse to read those out loud. We also played some Uno and then we went and got August who greeted me with a hug which makes me so happy.
While we waited for Daddy to get off work, we watched a few ocean creatures videos like a Giant Pacific octopus killing and eating a shark and a countdown of the ten most dangerous animals in the ocean.
Note: The most dangerous animals in the ocean are the venomous ones. Far more people die from run-ins with them than with sharks or salt water crocodiles.
You learn something new every day.
It was good to be with the boys. Of course when I am with them, my focus snaps sharply back into and onto reality. This, I am sure, is an evolved behavior which I am grateful for.
And now I'm home, about to fix us something for supper. I am sorry to have missed the Jan. 6 hearing today and I see that they voted to subpoena DJT to testify. Of course he won't. I will read about the session online tonight. I saw in our local paper the other day that the latest Q-Anon conspiracy theory has something to do with Hurricane Ian. That we liberals lured many conservative Republicans to Florida with our fast and loose covid restrictions and requirements and then, and THEN, somehow managed to engineer a giant hurricane which wiped out those very same conservatives.
These are the people who will vote for the poop of pond scum we call Trump should he choose to run again.

I am so over all of this shit. And it adds a constant thrum of fear that flows in my veins along with everything else, creating this discordant buzz of anxiety.
Hopefully though, once I know that Mr. Moon is safely on the road (is that an oxymoron?) and happy to be so, and I am here with cats and dolls, eating salmon and LeSueur baby peas, weeding my garden in the cooler temperatures, walking daily (haha!) and filling my days with whatever it is that I feel the least bit inclined to do, I will settle back down.
If history tells us anything, there may be Rolling Stones videos here, or maybe not, but we shall see, won't we?
Love...Ms. Moon
Posted by Ms. Moon at 7:10 PM