Here And Now, There And Then 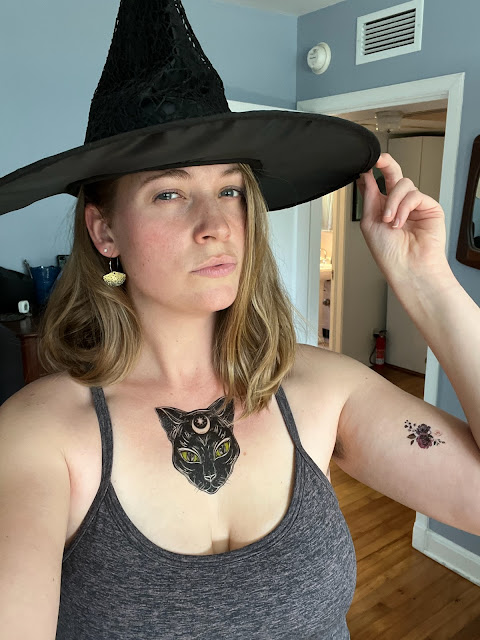 It's Halloween and there you have the requisite picture of a child in a costume. In this case, of course, the child is fairly well grown up but she sure is cute. Do you not love the cat tattoo? It's a fake but I like it so much I'd get a real one like that. It would like great on my crepey old chest, wouldn't it? Crepey AND creepy.

It's been an okay day and I did take a pretty good walk and I also had a nice conversation with a neighbor who was two when we moved here and is now twenty which is hard to believe but yes. We were talking about whether our old houses are haunted or not (she lives in a house that is slightly older than mine) and she told me that she doesn't really think it's haunted but that she does not leave her room after three a.m., even if she has to pee. "I'm not superstitious," she said. "But I'm a little bit stitious."
I loved that.

I seriously doubt we'll get any trick-or-treaters. If we do I guess I'll have to give them a shot of tequila or something. Not only are there no children in my immediate neighborhood but due to the palm trees in my front yard it's not easy to get to my front porch under the best of circumstances. I haven't costumed for Halloween in eons but I do keep thinking about August suggesting that I should try and be "pretty" for Halloween. This truly does crack me up. It sort of reminds me of when he was a tiny boy and got so upset because the underneath of my stove's range hood was filthy that I had to clean it for him. Perhaps he believes that as with the range hood, some hard work and the application of magical potions might make me much more presentable.
I love that child.

On Thursday I'll be leaving Lloyd to go to St. George Island where I'll be staying with my nursing school darlings. We did this last year after not being together for many, many years, and it was so wonderful we're doing it again. Of course, me being me, I am going through all sorts of anxiety about everything involved although I do know, because of last year, that it will end up being fabulous and wonderful and a tonic and a joy to my soul to see those women. And we'll be at the beach which is never a bad thing. For tonight's supper I have made one of Mr. Moon's favorites- white bean and venison chili- and there will be enough left over for him to eat a few times while I'm gone.

So. I'm pondering how to go on with this story. What in hell am I attempting to do here? To just tell it in order for it not to be forgotten?
And I wonder if I AM A NARCISSIST! It is one of my greatest fears to discover that I am and I think I have some of the traits. Is wanting to tell my story one of those traits? Are all memoirists narcissists?
Let's try not to get too into the weeds with this. I mean- all bloggers feel that we have something important enough to say that we need to send it out into the world. And Instagramers? And Tik-Tok folks? And podcasters? Do we not live in a world built for narcissists?

And I just deleted several paragraphs of more of the story because I am not in the state of mind at this moment to be able to determine what is too much and what is not enough.
Perhaps I should just write all of this as a completely separate thing, not on a blog. Or at least, not on Blessourhearts.
I have to think about this.
What I was writing about tonight were the friends I had left behind in Winter Haven where I lived from about 1965-1972. Sixth grade through high school. Those are, of course, incredibly formative years and I have some amazingly wonderful memories of those years and I have some devastatingly horrible memories of those years but throughout the high school years, especially the later ones, I had friends whom I loved so very much. We were all broken toys as the saying goes and all too weird and strange and probably intelligent to fit into the groove of high school life and we supported and loved each other.
We were in fact, each others' ride-or-dies in the most literal sense.
It's lucky we lived and didn't die for the most part but as with almost all humans, we needed and craved and longed for a community of our own, for love, for acceptance.
And in each other, we had that.

There was also a boy (there is always a boy) whom I loved and who broke my heart and the girl he broke it with whom I had thought was my friend.

And so a great part of my depression in Denver came from missing that family of broken toys so very much, and from grieving the love I'd thought I had with a boy who told me he loved me only to find out that he didn't.
Oh Lord- such ridiculous normal-life, teen-aged treacle.

More later, one way or another. 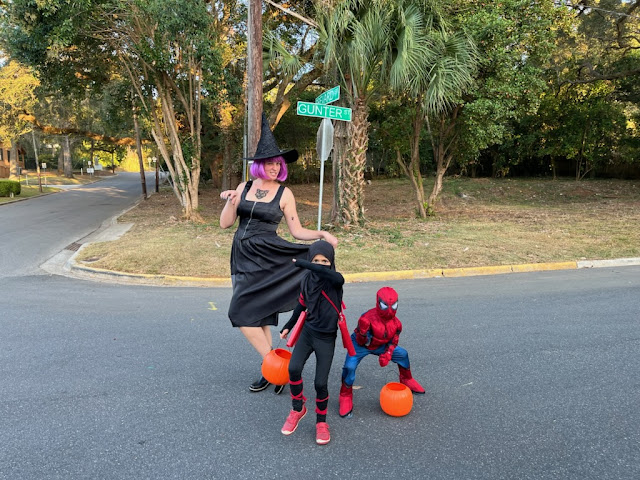 How I wish that I could have seen that all those years ago and been told- this will be how it goes, eventually. Take heart. You will be loved. You will love again more than you could ever have imagined.

I probably would not have believed it.
Posted by Ms. Moon at 6:42 PM