Lloyd, Where We Desperately Need Rain 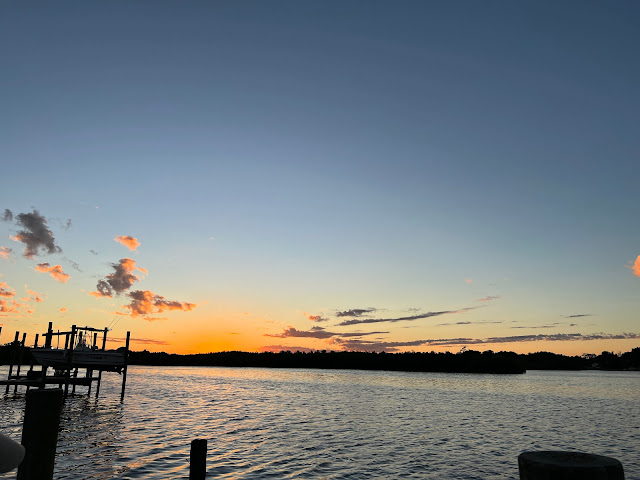 Well, that was the sunset last night. I imagine it looks something like that now on the dock in Roseland over the Sebastian River but we are not there to see it. We are home.

Mr. Moon got up before I did this morning to go back out to the dock to fish a little. He has been so thrilled to discover that indeed, there are fish in the Sebastian River and that he just needed to use live shrimp instead of artificial bait to catch them. In the last two days we were there he caught several Mangrove Snappers, a Black Drum, a Red Drum, a Sheepshead, a Snook, and a catfish.
They were all juveniles and they were all returned to the river to grow up and have another chance at life.

We went to a little museum a few days ago and we got there right before they closed but they let us wander around for those twenty minutes or so and there was a display about the Ais Indians who were the Indigenous People who were living in this area when the Europeans arrived. One of the things I read was from a journal of one of those men who said that the Ais did not plant anything, nor did they raise any domestic animals, but got all they needed from the waters and woods and ate clams and fish and oysters and game and the berries which were in season.
I can only imagine that they ate well.

We had such a beautiful trip. When we left this morning, I said out loud in the car, "Thank you, Glenn and Scott for making my childhood dreams come true."
And oh, they have. They absolutely and truly have. I can go back anytime and stay in that little pool house beside the spitting lions and watch the sunset from the dock every night.
It is such a strange and magic miracle.

We drove home on some major highways but took Highway 90 the last fifty or sixty miles because it goes through beautiful farm lands with funky charming towns and beautiful old homes, both grand and humble. This trip I was reading "Midnight in the Garden of Good and Evil" out loud as our road trip entertainment because Mr. Moon has never read it and as I read, as we traveled, I thought so much about the fact that both Savannah (the town where the book was set) and the places we were driving through were built on the backs and blood and bones of African enslaved people who cleared the land, grew the cotton, and built the mansions. There is no getting away from this fact and there is no way to romanticize it. This is just the truth.
Just as the Ais made it possible for ship-wrecked Europeans on the Atlantic coast to find fresh water, to harvest the bounty of the seas and jungle-forests and thus survive, the people who had been captured, transported, and sold at auction made it possible for the white people who, by law and sanctioned by their Bible, owned them, to create fabulous wealth with which they built testimonies to their own perceived greatness, superiority, and god-given privilege.

This is the great sin of the United States of America and there is no denying it and there may not possibly be any way to atone for it.

Well. That was a tangent. But I ponder this constantly. Sometimes more intensely than other times. Today was one of the intense times.

But we made it home and it's so dry here! Everything is shriveled and crunchy. I had Mark, our house-sitter, water the garden one day but even with that, the garden is stunted and the yard plants look desperate with thirst.

Speaking of Mark, he left things here so beautiful! He swept, he mopped, he dusted, he washed. What a joy it is to come home to a house which has no need of immediate attention. In fact, in many ways, it's nicer than when I left it. Dang, I love that dear man.

While we were in Roseland, we did a little thrift shopping, as we do. I did not buy much this trip but in a tiny shop dedicated to the support of a local non-kill animal shelter, I found a treasure. 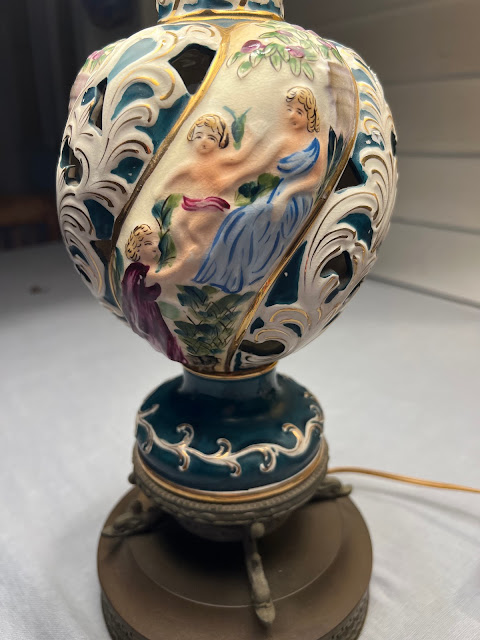 A Capodimonte porcelain lamp.
I knew what it was because I'd bought another one at Wag the Dog in Monticello years ago. Ironically, Wag the Dog is also a humane-society thrift store. 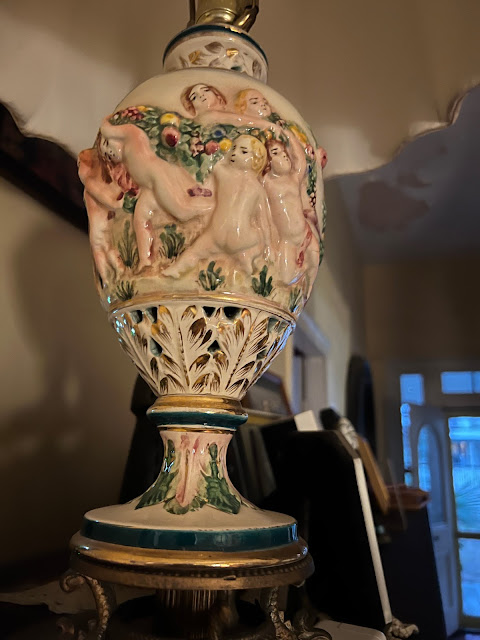 This is the one that has been sitting on my piano for several years.

They are not incredibly valuable but they are vintage and collectible. The tag on my new one said, "Works. $15". 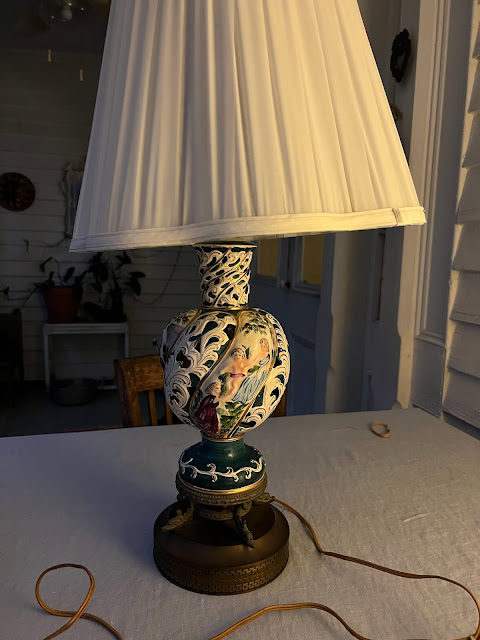 I hope I remember how to cook. I barely cooked a thing while we were in Roseland. In fact, we ate at Wasabi, the Thai Sushi restaurant three times for supper and had breakfast out every morning but one. It was such a delicious (in all ways) trip and I am in that between-space now, neither here nor there.

But it will be very fine to sleep in our own bed tonight. Maybe Jack will even cuddle me. Both of the cats seem to be glad we're home although (sigh) Maurice has already drawn blood on Mr. Moon. She loves him so much that she has to...what? Wound him?
God. That cat is so weird.

Anyway, here we are.