How Not To Tell A Story 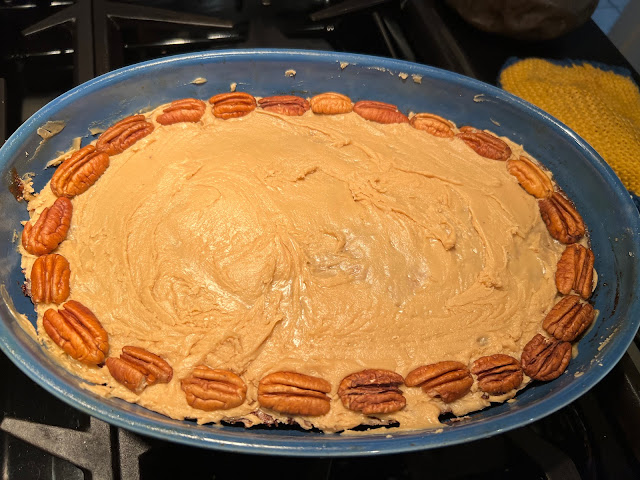 I'm blaming the weather on that cake which is, by the way, an apple spice cake with a caramel frosting.

The weather which has been coolish and overcast and humid all day long. It has looked like we might get some rain and felt as if we might get some rain but there is no rain. The radar shows some good rain to the west of us but it's probably not going to get any closer than Mobile, Alabama.
Every time I think of Mobile I remember the time I drove through it when I was nineteen years old. I was on my way to Tallahassee from Denver, Colorado in a forest green Ford Capri which held all of my worldly possessions including a rocking chair, a pressure cooker, my books, my stereo and albums, and two parakeets in a cage. I was not just on a joy ride, y'all. I was making my escape. It was a last gasp from a severely depressed young human to try and bring herself back to life. Denver, where I had been attending college until I dropped out, was not for me. I have told this story before. Being eighteen when I moved there, I had not slightest idea what I needed and wanted to live an authentic life but it turned out that mountains, few trees, and no large bodies of water were not on the list. Neither was a college where many, many of the students were rich kids who chose Denver because they love to ski. I, of course, had only ever been on waterskis which, if you grew up in Winter Haven, Florida, home of Cypress Gardens, City of 100 Lakes, you most definitely had been. Hell, I barely knew what snow was!
Anyway, okay. So I won't go into the part about living with the drug dealer or the reason I moved to Tallahassee but I packed up the aforementioned Capri with the aforementioned items and pulled out of the drug dealer's driveway about three days before he got busted and headed south and then east. When I got to Mobile I smoked part of a joint right before I got to the city and it was a most pleasurable experience, driving stoned through the insane five o'clock traffic.
I'd die now if I tried that.

Good Lord! What in hell was I talking about?
And no, I am not stoned. At all.
Oh yeah. Okay. The weather which led to the rain getting only to Mobile which lead to that whole other story but I still haven't gone into the connection of it being overcast and humid with cake baking.

I've been in a rather flat mood today. BECAUSE OF THE WEATHER?
Maybe.
So I've just done little domestic chores and listened to podcasts and texted with a friend. I've been wondering what to do with a surplus of apples in my kitchen. Mr. Moon brought home apples that had been bought for the road trip and hadn't been eaten and also apples that had been in his bag lunch every day while hunting and I already had apples. So. Yes. Lots of apples. Last night we had Waldorf Salad but there were still too many apples. Not enough to make apple butter and can it but a lot. So today in my sort of lost and languid mood, I decided to make a spiced apple cake and so I did and there you have it. It has five apples in it that I ran through the food processor along with fresh ginger and cinnamon and nutmeg and molasses and brown sugar and raisins and pecans, and the icing is butter, brown sugar, and confectioners' sugar.

So that is my story for today. I did of course get to Tallahassee when I was nineteen and I've never left except to move to the boonies of Lloyd which is just a shoulder-flick off the east side of the town. I never truly meant to stay here but once I started having children my roots got stronger and longer and now with the grandchildren all here I could not leave if I wanted to.

I never, ever miss Denver, not one tiny bit, and I think that the drug dealer is dead. He was a sweet guy, really. He was a businessman who loved drugs and the Grateful Dead. I went skiing one time and almost fell off the mountain which I was assured could not happen. I went rock climbing once and promised a deity I did not believe in that if I ever got down safe, I would never rock climb again. So far, that bargain has been kept. There were a few good things I experienced from my time in Denver and I do honor and appreciate those. But overall, I now know without a doubt that I am a southern woman who needs to be surrounded by southern things.

And as I have stated before- I still have that rocking chair. It is a beauty. And unlike the parakeets and the drug dealer, it will outlive me. 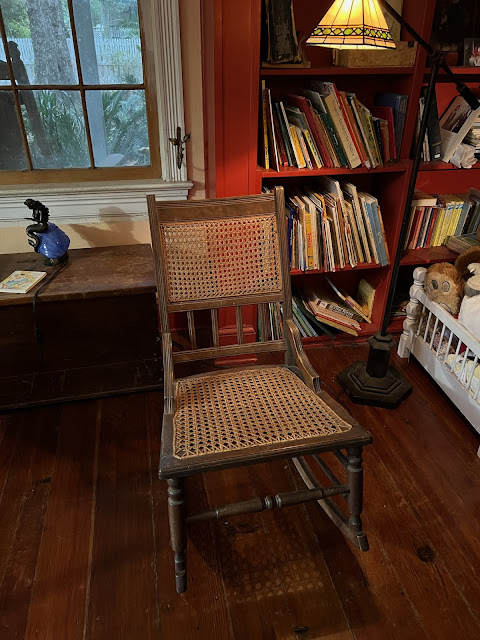